Time to get on with my '85. Have a maintenance list formulated, but need to put down in print.

In no particular order:

1. Torque steering stem
2. Have alternator rebuilt - regulator/rectifier reference setting is erratic, big noise as well
3. Replace FD pinion joint
4. Investigate ticking noise - has not gone away. Still thinking it's a lifter issue. Had the heads refurbished and in doing so, possibility that the valve and valve seats were machined wrong. Going to clean up the heads from the '85 carcass I have.
5. Have a bad ground wire on the rad fan mod
6. Balance the cylinder banks, possibly replace the o-rings on the injection holders

Will be starting the cleanup and put back together of the '85 carcass engine. Going to do this as economical as possible.

Thinking I can do all the gaskets needed myself. Lots of gasket material available on line.

Will be cleaning the parts/pieces, painting and using CERAKOTE.

Thinking I'll delve into COP units. Always thought that this would be a good upgrade.

My long term retirement project is living up to this requirement.

Coil on plug,i would guess

I seem to remember injectors being reported as the source for a ticking noise.
OP
OP

Investigating all options for the ticking sound - has me befuddled so far, annoying. Yes - COP is coil on plug. A fellow on the NGW forum installed COP units when he did an FI conversion from carbs.
OP
OP

Did some additional investigating. Looks like 4 COP units from a 2003 F150 will cost about $51.00 delivered. Small wiring harness to be made for connections. I would use the same setup as suggested in the forum thread, don't have an oscilloscope and the work appears to be done. Worse case revert back to original.

It’s interesting. I remember reading about the mod way back. Will be good to read how you make out.
E

Started getting at the 1200. Took some new cylinder compression readings:

Alternator going in tomorrow for rebuild, it has a bearing whine.

Battery went completely dead over the last few days. Think I left the key in the ACC position. Will charge it and do a battery test in the morning. Thankfully had a good spare on hand.

The engine is firing on all four cylinders. The plugs are all the same colour - good.

Will take the rear off. Taking the pinion joint off the 1200 FD to put on the 1500 FD - it was new some 40K Kms ago. Have a low mileage u-joint that I will be installing.

Small bit of wiring to fix.

Not a lot to do, just enough for a good work week.

The COP mod will be interesting. Not a lot of room above the plugs with the CFI covers and such. I think the notion of COP units is a good idea if these can be fitted. It's a good alternative to finding substitute coils. Going to do some looking to get the specs for the 2003 F-150 coil units.
OP
OP

Bit more work done. Replaced the FD pinion joint, going to leave the u-joint alone. To be honest, could not get into changing it. Will do a clean up before I put the saddlebags back on tomorrow.

The battery went dead completely. Never liked it from the get go, but used it anyway. Looked into lithium-ion batteries and have settled on getting a Lifepo4 battery out of Alberta. It's a few more sheckles than an AGM, about $30.00 CDN. The charger is $69.00. One advantage is it does not drain down like an AGM or lead acid. Queried the cold issue that I have read about. This company sells these batteries to snowmobilers, enough said.
Last edited: Aug 15, 2022
OP
OP

Cleaned out the 1500 pinion joint. The splines are all identical. Thought that it was indicating wear, but it is not. Thinking Honda changed the spline design for the 1500. The 1200 pinion joint fits and works quite well.
OP
OP

Ordered the Lifepo4 and battery tender for the 1200. Alternator refurbished, only needed bearings. Took for road test, still don't like the engine noise(s). Seems this engine is determined to test my patience. Started to put a list together to assemble the carcass engine I brought from Ontario. Found new timing belts Gates T070 on Amazon for $9.00 each. Will get a couple of spares, but have to wait until tomorrow to order second set.

Pricing parts that I "need". Going to keep this rebuild to the bargain basement level, minimizing shop work and such. Will do the cleanup and honing of the cylinders myself, minimal valve lapping to be done.

Need a project or I just get bored. Will be comparing the carcass engine parts to the engine I just did. Doing this may give me some insight into why things are happening. I had mentioned that the engine and bike had a shady past. You find out a lot about something when you get up close and personal.
OP
OP

Been a productive day. When I disassembled the 1200 carcass engine last year at my brother's, I snapped one bolt in the right head for the thermostat piping. Had it removed today. I had to take it to the shop, wasn't expensive and it is done. Chased all the bolt holes for the heads, cleaned, and lapped the valves. Have to remove the final vestiges of the head gasket. Overall good day. Will be starting on the engine cases tomorrow.

Found out that each head is stamped for the side and cylinders. Noticed this on the left cylinder head, saw a 2 and 4. Confirmed this on the right side cylinder head when I got it back. It's very subtle, but there. Checked the OEM service manual and no mention of this that I can find.
OP
OP

Was asked this morning if my intention is to swap engines - the answer is yes. Not so much that I did a lot of work on the engine, new parts and looking good, but there is a time when an engine will just not cooperate.

My father ran stock cars back in the '60s. He decided one year that he was going to do up an engine to the nth degree. Melted the pistons. Went back to the manufacturer and he had been given the incorrect bore sizes - too small. Engine was toast. Thinking the 1200 engine had a shady life previously, and this does not help. Things happen.

There is one rear cover bolt that has been broke and repaired wth JB Weld. Will take a look at to determine if more has to be done. May be okay, at top of cover, only has to maintain a bit of pressure. 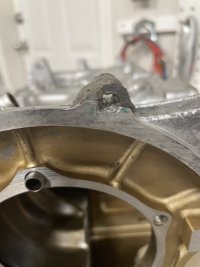 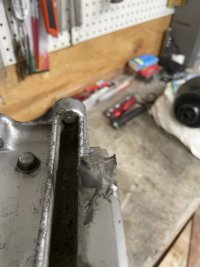 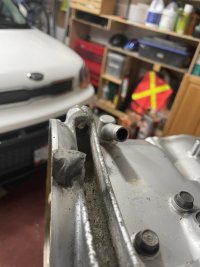 The major parts, heads/engine cases are ready for work. Ordered an engine gasket set this morning - one to two weeks. Some inexpensive head gaskets are available as well. Lots of prep work that can be done until parts come in.

Have some additional o-rings for the injector holders coming, and the crank oil seal and rear cover oil seal as well.

The o-rings on the oil fill, timing mark, and rear cover caps are flat, may seal but hard to remove after the fact. New ones coming. Have to differentiate between maintenance and rebuild, these are maintenance.
OP
OP

Been working a bit today. Ordered a cylinder hone from Amazon, don't need an expensive one. Cleaned a couple more parts and went through my 1200 engine carcass boxes for engine parts. Used a lot of Ziplock bags, thinking I should be invested in the company.

Went through storage bins and took out what I could remember/identify for the small, individual parts. This is a pic of the basket case that was once an engine: 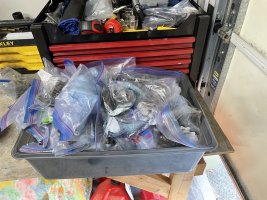 Probably a few more items that I passed over, but a good start.

Costco and Sams have ZipLoks in big boxes that have each size up through gallon.
OP
OP

Have lots of used ones, don't throw them out until past best before date. Use Ziplock bags for everything when I'm working.

In between waiting been cleaning the Spyder. Just like a Gold Wing, lots of plastic. Doing a once in a decade clean, detailing actually. Had to take the front trunk apart, bugs from our trip got to places that should never have seen an insect and imbedded between pieces. Started on Sunday. The rads were a mess: 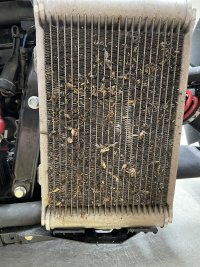 Both were the same. Took the fans off the back and flushed from back to front.