I have done some threads on the electrical aspect of my 1985 LTD FI model motorcycle. Have learned a lot from working on it and perusing the various forums and threads. I mentioned in one of the threads that I would be putting together a thread regarding the Idle Air Control (IAC) system on my '85 LTD. This information is also pertinent to the '86 SE-i FI motorcycles as well.

The IAC system is comprised of an IAC control valve, air hose, and two reed valves. These items are connected at various locations of the air chamber and the throttle bodies. 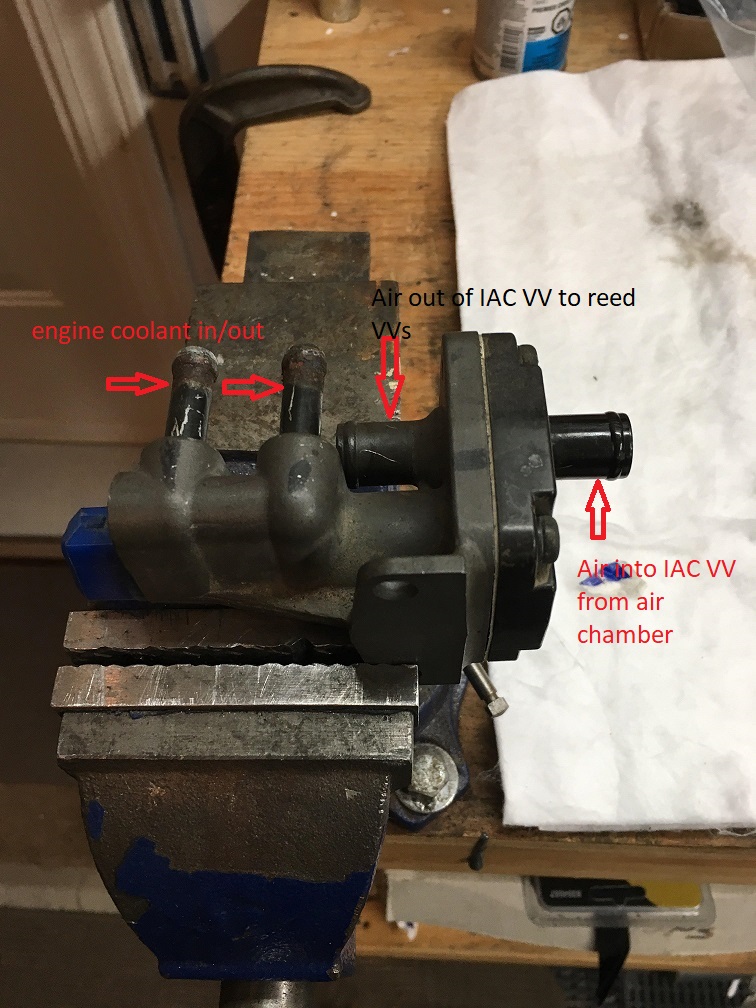 The IAC system provides additional combustion air on engine start, and during normal operation when the throttle plate(s) are closed during motorcycle deceleration.

The IAC system is used to provide additional air to the engine cylinders during a cold start because the ECU controls the idle of the engine. On start, the ECU causes the engine RPM to be some 300 to 500 RPM higher than idle and as the engine warms up the engine speed is reduced to the set idle RPM. To ensure there is sufficient combustion air, there is this IAC system. 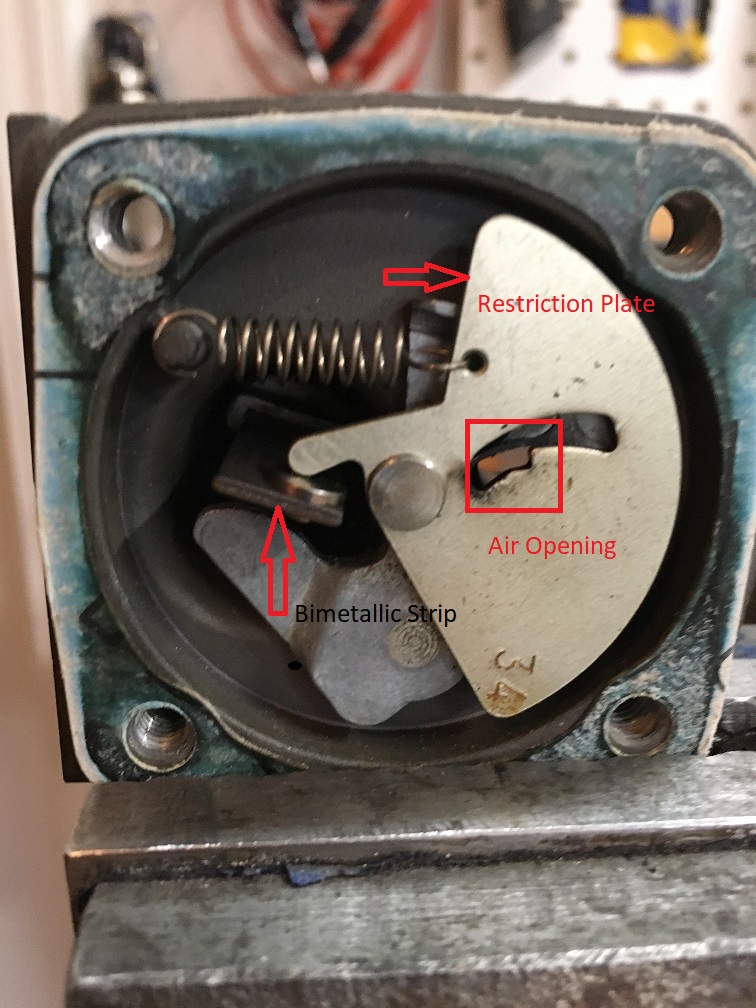 IAC VV air opening when cold. You can see light through the opening: 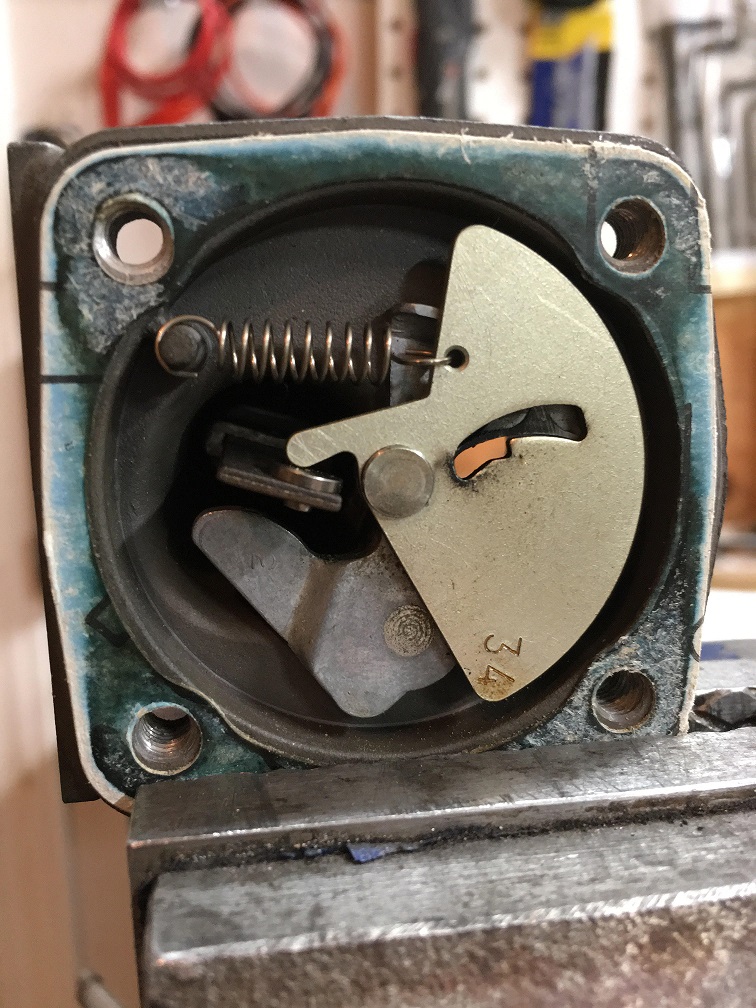 IAC VV when warm. Notice the larger opening to admit more air to the IAC system:

This valve also has a engine water connections so that the engine coolant will flow through the valve to prevent this valve from “freezing” up during cold weather operations. This is not really relevant to us as most of our riding is during the better weather months and those of us that choose to ride during the winter months live in areas that do not really get that cold.

I had thought that this system would be more complicated; however, the simplistic design is quite effective in achieving the aim. I would surmise that this design is based on the automotive industry design and adapted for use in the '85 and '86 GL1200 FI models.

Here is a schematic of how the air flows in the IAC system: 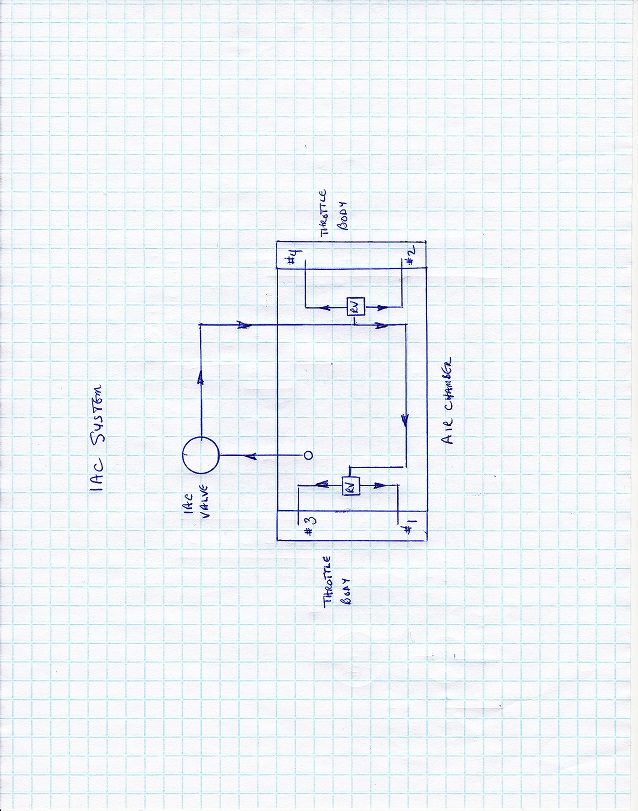 This explanation of the IAC system in the '85 and '86 GL1200 FI model motorcycles is my understanding based on working on the system and seeing how it is connected into the engine. I have also read a few articles on this, but was never satisfied with what I had been reading. These articles in conjunction with working on the IAC system is what I have used to do this article.

As always, it is only my opinion, and I do invite comments regarding it.

Thanks for reading. Cheers

Could it be that the voltage is used to heat the strip and once the engine coolant is hot, the coolant takes 'over' from the voltage? I have no clue but thinking of some I've worked on my memory is pushing that way.

In my research, the coolant is to keep the valve free from icing in colder climates. There is always a 12 VDC power supply to the IAC VV when the engine is running.

Well so much for memory