Looking towards the future, as I did with the 2014 Spyder I picked up last year. Bit ahead of my riding plan, but a deal one cannot ignore.

Riding two wheels has now been on my mind. My '85 Limited Edition is not too heavy, some 850 lbs, but riding two up with gear it does get heavy. I also like making it work as well as it can, finding alternatives and sharing my experience with an older GW fuel injected model.

Even so, have to be realistic. Still in good health, and the body joints are good as well.

My riding friend who blindsided me with the Spyder experience has a 2021 Himalyan that has been nicely kitted. 450 Km on the clock, and just serviced. Went for coffee with him and started to discuss the Himalyan bike(s). He thought I was talking about buying one, but not his. He mentioned that saddlebags were almost a prerequisite. Mentioned after this that I was not talking about a different Himalayan, but specifically his, knowing that he would be selling it in the near future - it's what he does.

Got on the web and browsed the Himalyan forum, and watched several reviews. There's a love/hate relationship out there, but mostly a love of this bike - especially from the older crowd.

It was mentioned that if you ride it as intended it will do everything well, not great. Reminds me of the reviews on the 1000 V-Strom.

This morning at coffee, I mentioned my research. I was told that if I wanted his Himalayan, I would have to make up my mind quick so I mentioned that he should make me an offer I couldn't refuse. He did and I have commited to this 2021 Himalayan.

Went to his place, took it for a short ride and it reminded me of the V-Strom I had, but a smaller version.

Gets some 75 or so MPG - price of fuel is going up, can be ridden at 5K RPM - approximately 100 KPH all day long. Great solo ride, and some even ride two up - have Spyder for this. Easy to maintain, go anywhere bike as long as used as intended. Realistically, most of my riding is done in the local area.

Lots of accessories and mods that you can do such as an engine size upgrade with a new top end. This would be a consideration if the engine needed to be rebuilt - go up a size.

I have always wanted a bike in Ontario to ride the eastern part of Canada and US. Fly in, short maintenance period, do the tour, put back in storage, fly home. Riding across the prairies after a few times is very tedious. Good place for my '85 Limited Edition.

New additrion to the fold. Looking forward to riding a few Kms on it.

Anyone else having similar future riding thoughts?

I read to the end expecting at least one

I know, ain't true unless there are pics. Haven't got it yet, but will post pics.

I have a neighbor/riding buddy that is seriously wanting one. Plans to sell his Sportster to make room. The lady that does "Itchy Boots" YouTube channel rode several and they seemed to serve her well (although she is now on a Honda to downsize a bit). RE was once a quality failure, but according to Ryan F9 YouTube reviews they have really turned the QC around. I suspect that they hired some Japanese to come in and correct things.

I tried to find RyanF9 review, but could not. These are in serious demand. Talked to the dealer here on the Island about this. He's got 30K Kms on his and his wife has 27K Kms on hers. He is an advocate of these bikes. He's a tall fellow 6'5" and has a tall comfort seat from Seat Concepts. Will be trying this when I get my new-to-me Himalayan.
J

I bought a new 2018 Himalayan in the spring of 2019. At that time I also had a (bought new) 1983 Gold Wing Interstate. I used the Wing for hi-way stuff and the Himalayan for running errands and a bit of off-road fun.

Riding the Himalayan puts a grin on my face every time I ride it. It's incredible how stable it is and how it well it corners. Maintenance is super easy. I've gotten 75 miles per US gallon many times.

I've got the factory panniers, Barkbusters, the Givi engine guards, a tank bag and I wired in a USB outlet and a Battery Tender plug.

I've done all my own maintenance.

The only downside for me are they run tubed tires. I've punctured once but was able to do a roadside repair and get back on my way.

The seat height is OK and I'm only 5-5". I can toss that thing around and it's really fun compared to the weight and bulk of the Gold Wing.

I'm fortunate to be able to ride 2 motorcycles that are so diametrically opposed but each one brings me joy.

I hope you have a great experience owning one as I do.

The Himalayan is going to be different than my '85 Limited Edition, 2014 Spyder RTL. Worse case it doesn't gel, and someone else gets toenjoy it, but don't expect that to happen. New heated hand grips, Barkbusters, and a few other goodies. Looking at the Seat Concept mod. Have to add connections for electronics. Gas prices up here in the north are driving us to more economical means of transport. Here are some pictures: 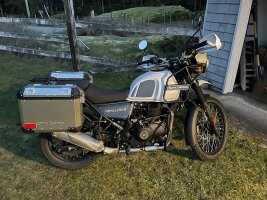 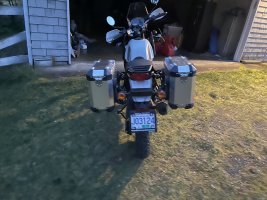 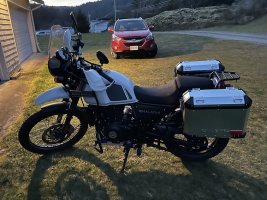 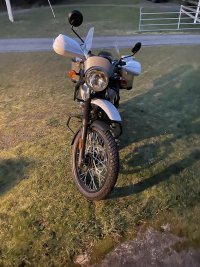 Not any better looking than the Klr, but love the gas mpg!

I think it's a bit querky. Reminds me of my 1800 that didn't get a second look, but my '85 was a great discussion in parking lots.

Fuel economy is now at the forefront of a lot of people. There seams to be a lot of interest in this bike, but not a lot of supply.

Most of my riding will be done on the Island where speeds don't exceed a legal max of 100 KPH with one exception just north of Nanaimo at 110 KPH. I have no illusions, and once I get used to where the power range is RPM wise, should be a nice ride. My first bike, a 1972 250 cc Suzuki Hustler had 32 HP from a twin, but had a top end of some 110 MPH. The Himalayan coming in at 24 HP for a one lung long stroke can't be too bad, but is a bit slower at say 80 MPH topped out. Reviews and from talking to riders of this bike, it does a comfortable 5K RPM and 100 KPH all day long.
J

60 mph will be very easy on the 411 cc and gas mileage will not suffer at that speed. Spend much time above that and mileage will drop significantly.

Going to pick the Himalayan up today, and for the pleasure, it's raining. Won't mention this to my brother as he is still snowmobiling in the cold and blowing snow.

Hoping this bike will make me, probably will, slow down, smell the coffee, stay of the main highway - we do have one on this Island.

My friend had a set of Denali DR1 driving lights he was going to install on it. Got for the bargain price of $200.00 CDN - new and in box, never installed. Did some looking at these, thinking aircraft landing lights - quite the unit. Thinking a smaller set for day time riding, use the Denali lights for night time and connect into the high beam switch.

Will be installing a switched accessory fuse block.

Rednaxs60 said:
Going to pick the Himalayan up today, and for the pleasure, it's raining.
Click to expand...

Picked up a couple of company cars in the 80's in the rain and snow.

Picked up my 2020 Gold Wing Tour last March in a drizzle.

Picked up my 2013 Hyundai Elantra in February 2014 while it was snowing.

My wife picked up her 2021 Subaru Crosstrek this past December while it was snowing.

Seems like the only time my house gets a new vehicle is when it's snowing or raining.

Every motorcycle on the planet has its idiosyncrasies. This one no different.

Forum discussion are on electrical and brakes.

Went for a morning ride and visited the Mom and Pop Royal Enfield shop. Coffee was good, as was the conversation and treats - butterscotch cookies.

The rear brakes are a bit lacking, but was told that becasue the bike is so new, now have 650 Kms on it, the rear brakes should improve with time.

The parasitic power drain was confirmed, but I was told not to sweat it. Riding daily or thereabouts, should keep this at bay, but if going away for a while, battery tender, disconnect the negative battery connection(s), or take out the "charging" fuse.

Stator size regarding heated clothing, hand warmers, and electronics should noy be an issue.

Nothing too taxing regarding this bike. Time to relax, monitor and ride.

Had a nice ride on the Himalayan. Lots of issues to consider and solutions needed; however, fuel economy was on my list for today. Did the Renfrew Loop, a 300 Km ride. Varying road conditions and kept the maximum speed to around 90 KPH. Did some 256 Kms, using 7.725 litres. This works out to 33 KPL, 93 MPG Imperial, 73 MPG US. Suitably impressed.

Not bad for a 411 cc one lung thumper. Put the Seat Concept dual sport/touring seat upgrade on. Bit firm. Thinking I would take the skin off, carve out a gel pad area and put back on. The fellow I used in Kingston washington puts a gel pad in with every seat alteration.

Sounds like you're having a good time with it. Enjoy the ride.

Yeah Gas price is insane. I'm having to really group my errands as much as possible and only essentials.

Pretty soon our roadways are going to look like the pictures we see of the far east: 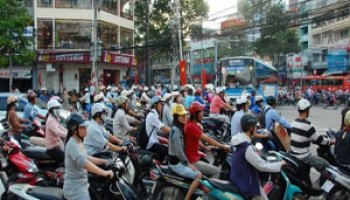 Aussiegold is no longer with us.