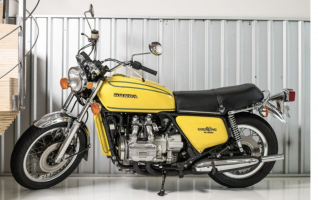 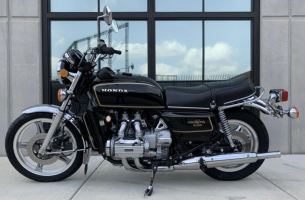 The yellow bike is the more expected result. It’s believed that only 500 or so yellow bikes were made. That makes it more scarce than even the ’76 LTD model (2,000 made). But, the result for the ’78 bike is a bit harder to understand. It’s a very nice example, but the later GL1000s have never been considered highly collectible. That was then. What’s going on?

Recently, all vintage Japanese bikes have zoomed up in value …especially on high end auction sites like BAT. Example: a nice ’75 Yamaha RD125B just sold this week for $6,900. That’s about 7 times what it sold for new! Some of this may be “pandemic” related. Working on vintage bikes is a “safe” hobby. Demographics are part of the answer too. There’s large cohort of retired, Baby Boomers with time (and cash) on their hands. Thanks to the robust stock market, retirement accounts for many of them have been plumped up. Now, some of them can afford to buy bikes they lusted after when they were poor teenagers.

BAT is a “curated” site, but they are finally "loosening" up on the types of bikes they will list. Vintage motorcycles are suddenly “in” and much cheaper to own that a Ferrari. I told BAT years ago that they were missing a big opportunity vs. EBAY by not pursuing the vintage motorcycle market. Finally, they’ve seen the light. Many aspects of buying vehicles via EBAY, Craigslist , Facebook, Cycle Trader, etc. are horrible. Scam artists have crowded out many honest sellers. BAT is capitalizing on these realities.

The BAT platform is not only curated … it’s also moderated. They allow a free flow of questions and answers with sellers during an auction. They also make it very easy to post videos of vehicles running, riding, cold starts, etc.

Best of all, auctions are automatically extended at the end so long as there are active bidders. This continues indefinitely until there are no more bidders. This protects bidders and sellers. No more "sniping" like on EBAY!

Back to what this might mean to GL1000 owners. I’ve owned and sold so many GL1000s I’ve lost track. I also like to modify and “improve” the performance of some bikes I own. This is almost always a “black hole” of money deal and a poor investment when it comes time to sell. The worst I ever did financially on selling a bike involved several highly modified “performance” bikes …included a couple that were supercharged. I got back about 1/4 what I invested in those bikes. Fun to own and ride, but painful to sell.

I also happen to like “cafe” bikes, but those are also very hard to sell no matter how nice. Why? Simple: people want to build their own dream bike …not buy yours.

So if you spend time studying auction results …especially on BAT, one fact is undeniable: Buyers crave ORIGINALITY! They bid accordingly. Right now, there are more buyers than sellers for original collectible bikes. The definition of “collectible” expands very day. It used to be fairly easy to snag decent, original GL1000s that were easy to resurrect. Now, such bikes are very hard to find. I “walk” on 90% of the bikes I consider.

My advice: in the current market, you’ll do much better selling a bike if it’s as close to “stock” as possible. I’ve proven this many times in my own transactions.

If you’re tempted to modify your GL1000 (as I’ve been known to do), keep all the parts necessary to return it to 100% stock condition! You’ll be glad you did one day. And for God’s sake, don’t pull out a Sawzall and hack up your frame …as I’ve also been known to do!
Last edited: Aug 30, 2021

8 years ago I sold my '75 GL1000 (the one in my profile pic) to a customer for $3K. While he was trailering it home to FL, he got rear ended and the bike got banged up pretty good. He never did get to ride it, but he has a never doing the repairs as of last fall. So last October, he was hanging around just visiting, and I was not riding for most of last year due to hand surgery. I was depressed, and business was slow due to Covid B.S. here in VA, so I sold him my '81 GL1100 for $3500, the one I had Dan put in the slide show up top. He hasn't stopped by to pick it up yet because he lives in FL and/or MA, and stops by here about once a year. I was finally able to use my hand well enough for clutching around last T-Giving, so I have been out on it several times since then, because it is still living here, lol! But now I'm depressed about selling it, even though it is still here. I don't really have anyone to carry on it, but I'm almost tempted to give him back the money and keep the bike anyways. Then again, I don't really need as I ride alone, and mostly on my '82 Silverwing Interstate. Business has picked up since last year, but not as good as 2019 was, yet. So I really should just let it go whenever he finally gets here, but I'm still sad about it, lol! I think I'll give it a short spin today before the hurricane weather gets here.