The one road test before buying a new to you motorcycle that is probably never done, I know I don't, is a road test to determine what the lighting is like on the motorcycle in question. Always do one soon after I have bought the motorcycle, but never before.

My 2006 Suzuki Boulevard C90T (1500 cc) lights were not bad. Next bike, 2008 Honda GW - lighting was superb, low and high beam. The '85 1200, well it's a work in progress and needs the installation of driving lights to assist. My 1500 - just sold, was acceptable without driving lights, but could have used the headlight system from the later 1500 years that had the clear lens. The V-Strom DL 1000 has very good headlights and are a close second to the '08 GW.

On to my new acquisition, 2014 Can-Am Spyder RT LE. Took it for its inaugural night headlight road test last night. Seems there are projector headlights in this Spyder. The low beams are quite good and the road is well lit when using high beams. The fog/driving lights add to the low beam coverage, but not a lot. The low beams have that height cut off aspect that is very noticeable - its like there is a line drawn in the air space in front that the low beam light does not go above, and the low beams have an acceptable illumination space in front of the Spyder.

My rating for the motorcycles I have owned is:

What has been your experience with headlights and such? Inquiring minds want to know.

GL1000 - passable only, also the '79 CB750F although I might give the nod to the CB. GL1800 - yes, very very good. '86 SEi was pretty good with the side driving lights filling the ditch lines. The 2021 Spyder RT Limited has LED headlights. I understand they are superb. Plan to investigate.
OP
OP

Have to check out the type of headlights my Spyder has. Edit - looked for specs on this, and read the owner's manual, apparently 60W Halogen.

Have looked at some YouTube videos where the headlights have been changed to LED form Lamonster Garage. Canam Spyder Accessories has a set as well - lifetime warranty and if the bulb fails for whatever reason, this company will replace it no questions asked. Mentions the same for the fog light LED upgrade. Both of these upgrades have a waterproof fan, not a fan of this, but the warranty is not bad. I do like the non-fan type that Lamonster Garage has.

Iamps do some interesting things as they age... conventional incandescents, halogens, and LEDs all do different things, and the shape of some reflectors, and the pattern they present seem baffling at times. My '84 Aspy is NOT by any means a 'high mile' machine, but I found that the stock lamp was yellowing-out when I got the bike, and there was only about 12k on the odometer. I gave it a visit with my volt-ohmmeter, and even used jumpers direct to the battery, and also to a laboratory power supply, and the reason they were yellowish was just... because they were yellowish.

The pattern on my '84 is probably about the most useless of any bike I've ever hand, and I'm convinced that there's something wrong with either it, or the position adjuster. When riding by myself, the difference between high and low beam is simple... draw a line on the pavement out in front of the bike about 90 feet. Low beam illuminates everything BELOW that line... to a point about five feet in front of the front wheel.. Flip it to high beam, it will illuminate everything ABOVE that line, including squirrels in the treetops... and the bottom is totally dark.
Adjusting the elevation of the pattern doesn't do much... it WILL raise the low beam elevation a bit, but the converse circumstance places the high beam illumination too high to touch the road.

As a result of this circumstance, the Aspy is basically always in LOW beam... and I turn on some aftermarket LED lamps on the engine guards. They project well horizontally, without projecting too high.

If anyone else has noted this character, then let me know, and at least I won't be alone... if you've dealt with it, and found a fix, I'm all ears!!!

My 84 has gotten to the point that a LED flashlight is brighter than the headlight. It's time to put some LED driving lights on it. The headlight insert is still the OEM piece, but I have an aftermarket piece that I am going to work to get in the bucket as well. Any type of improvement will be a huge improvement. For the 87, I added CREE LED lights for both low and high beam riding, they just cannot be beat.

+1 on the Cree led lights. Best thing I ever did for night time driving for the price. 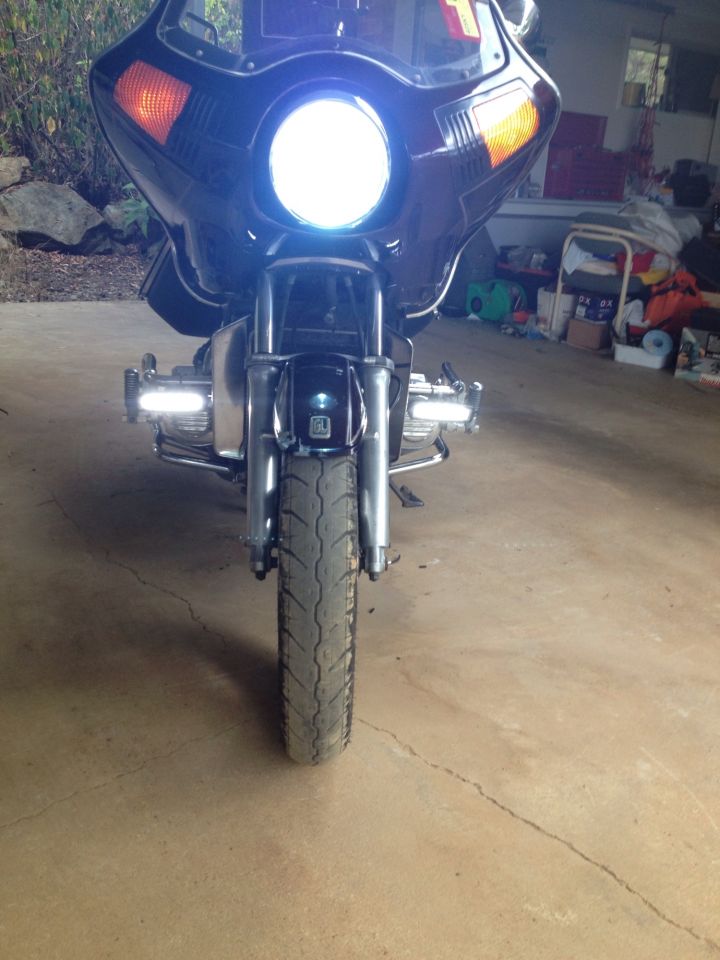 Love my LEDs on the Rats Nest especially the new 12/24 watt bulb in the Hella lens.

Anyone care to suggest what source and part number (*or a link to) best for the '84 Aspencade? The OEM part indicates BULB (12V60/55W) 34901-MC7-601AH, which appears to be a common H4 base, so at least from base-forward, they'd fit, but obviously the layout of LEDs on the column has direct impact on how light is distributed ahead AND... the driver module on the rear may, or may not clear obstructions that a conventional H4 would have...

Yes, there's LOTS of them out there... literally hundreds of different types, some will fit, but I'm pretty certain that with the interior space, some won't. WHICH one did you buy, how well did it fit, and how well does it work? Does it require a mechanical fan, or is it convection cooled? How's the lighting pattern on the road?
Share:
Facebook Twitter Reddit Pinterest Tumblr WhatsApp Email Share Link