The one I have committed to is the GW of the Spyder line. Lots of seating room for two up riding. Almost had a deal breaker, no heated seat. :smilie_happy:

Even if you haven’t ANY Goldwings you’re welcome here.
Click to expand...

Thank you. Have some good projects to get back at such as the ECU replacement, investigate why the fast idle at cold start is not operating correctly, making sure the 1500 FD mated to the 1200 rim and brake unit works correctly - long term test/trial, and others that I'm sure I haven't thought of yet. Still looking for a suitable TPS replacement that would be a plug/play. The spark igniters are another item that I have been researching as well. Pretty soon the '85 will be like a car in Cuba, Goldwing on the exterior only.

Edit - uses premium gas, not used to this.

Congrats on the new ride!

Thanks, picking up tomorrow.

Only issue I have with going this route and selling the V-Strom and 1500, is that I have been accumulating parts/pieces to rebuild the 1500 engine and do other maintenance. have items such as new water pp, new u-joint, new water hoses, carb rebuild kits from Randack, and other items. Now I have to see these gone. Going to make a list then post. Won't be foolish regarding pricing - want parts/pieces gone, and will be asking for shipping.

The RT. Looking to replace the 1800 one day. May call and get my demo swapped to today due to weather forecast.

The RT. Looking to replace the 1800 one day. May call and get my demo swapped to today due to weather forecast.
Click to expand...

I would definitely test ride the RT Limited Edition if it is to be a possible replacement for the 1800.

The demos probably don't have the more beefy sway bar which helps in reducing the roll in a corner. There is an adjustable handle bar for these RT LE models, pricy item, the couple that has owned the one I am buying had the sway bar upgraded, and changed out the handle bar as well. Not much to add to it except maybe a GPS if you wanted. There are connections for USB and such, but found these to be tucked away. Should be able to route to a different spot. Maybe the new ones are more user friendly.

Ask the dealer if he loans out demos for a weekend. The dealer in Ladysmith up island does - don't know the details, but it does this because it takes more than a ride down the road and back to get used to the different riding style and dial yourself into the 3 wheel Spyder mindset. Notice I mention that you get dialed into the ride.

Pick up the Spyder today and will post pics of the new ride.

Good luck on the demo ride.

Some of the extras are Can-Am luggage, Can-am Cover, wind deflectors, foot water deflector, Tri Axis adjustable handlebars. With only 9K Kms on the clock won't need tires/brakes too soon. Needs an oil/filter change, going to use Amsoil 5W40 Metric - nothing too good for the new ride. Have ordered up passenger arm rests for Sonya, and have looked into a trailer hitch for towing the N-Line trailer.

Talked to the N-Line trailer manufacturer. The service manager mentioned that the adaptor that is needed to connect the N-Line trailer to the Spyder is not as robust as it should be and he recommended one that they have designed. He's sending pictures.

Like the lighting on the Spyder. Good visibility on the rear and has back up lights - very cool. Will take it out tonight to test the lighting.

Here are pics of the Spyder: 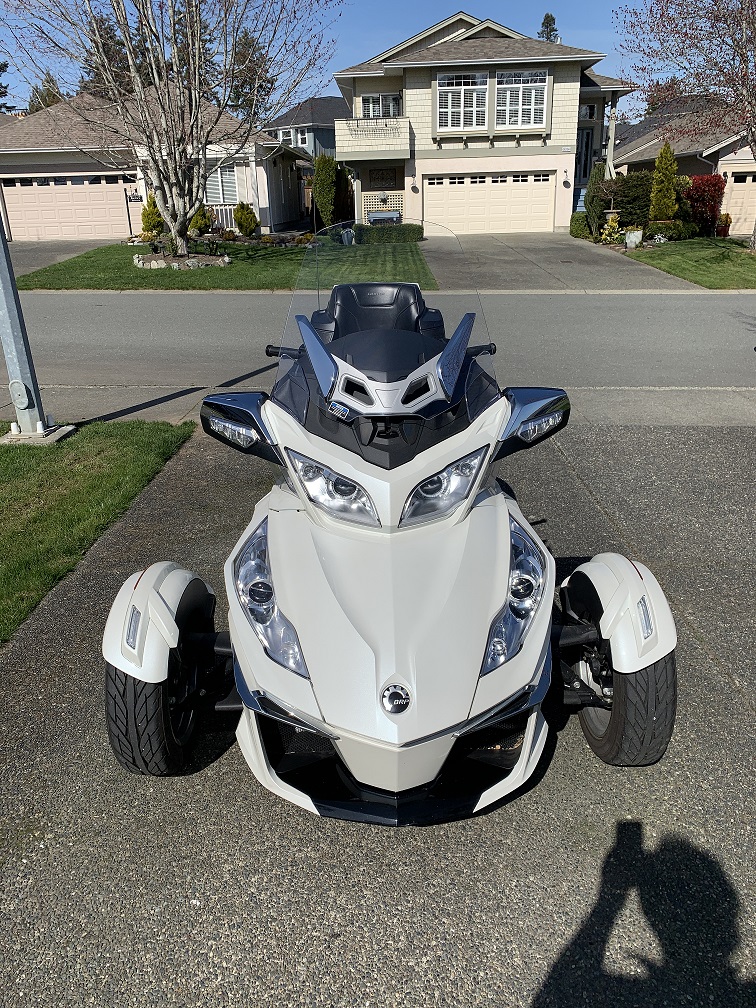 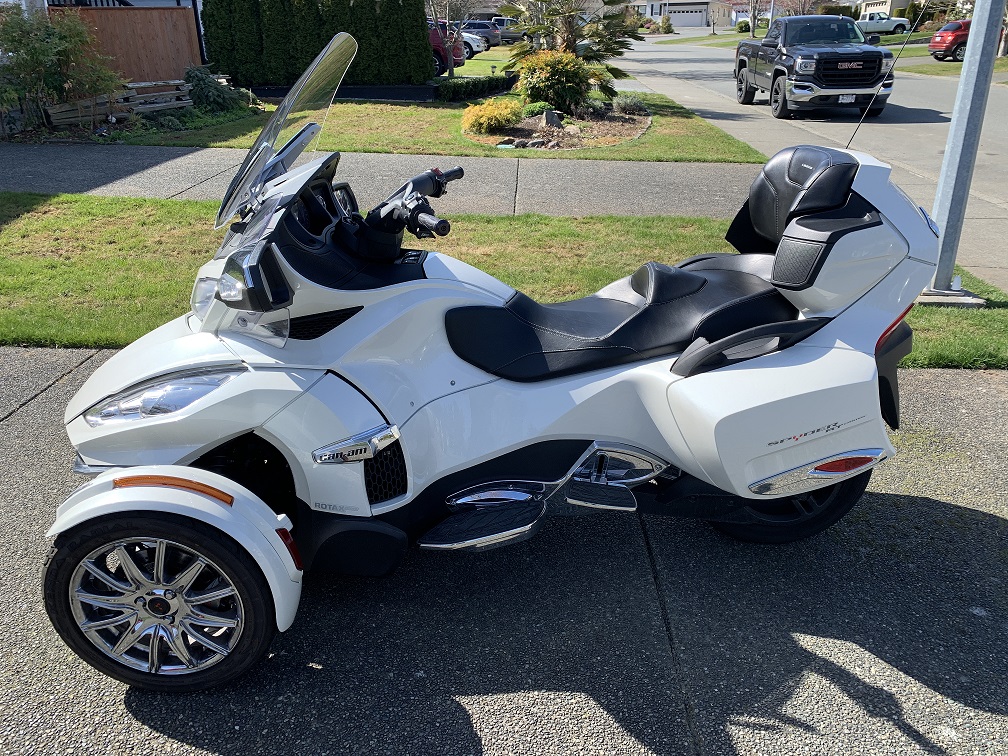 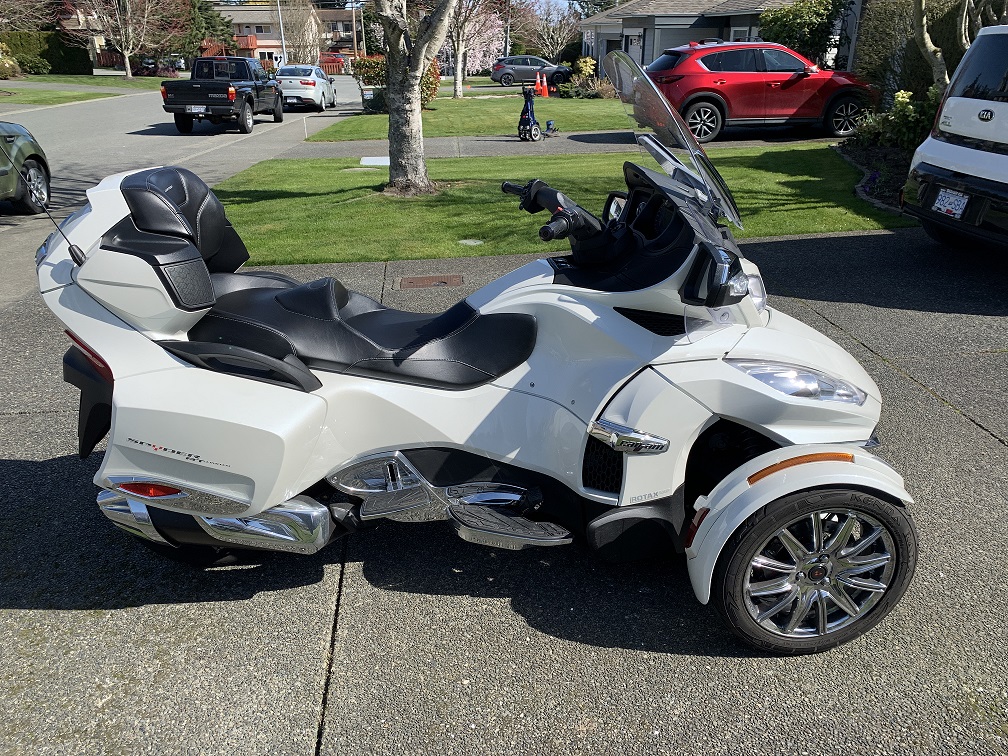 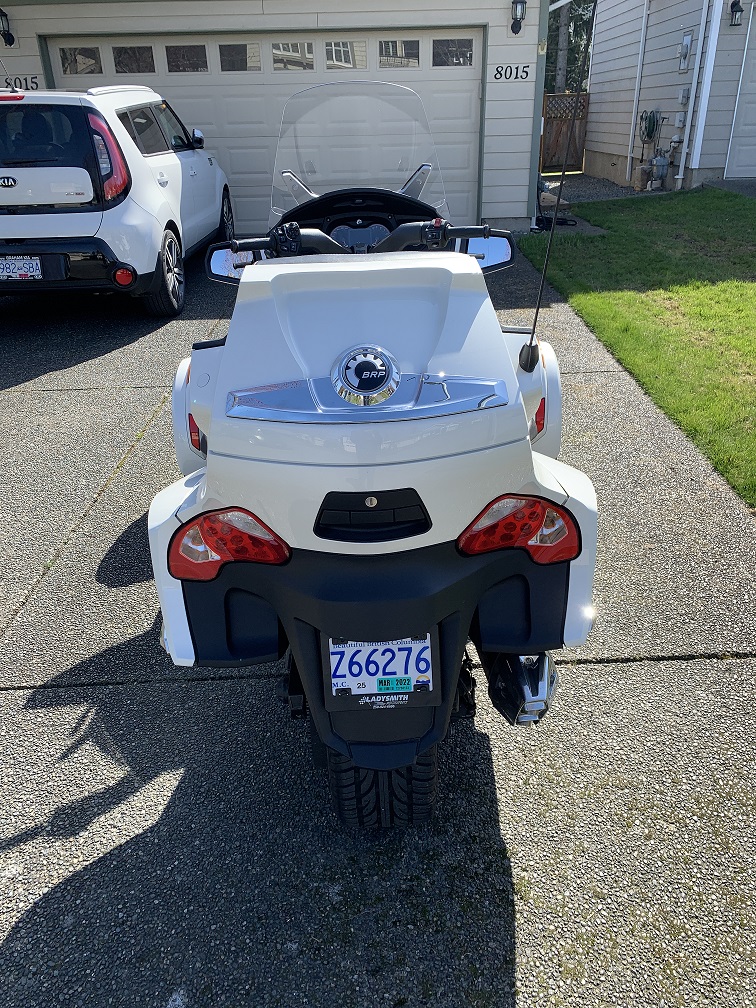 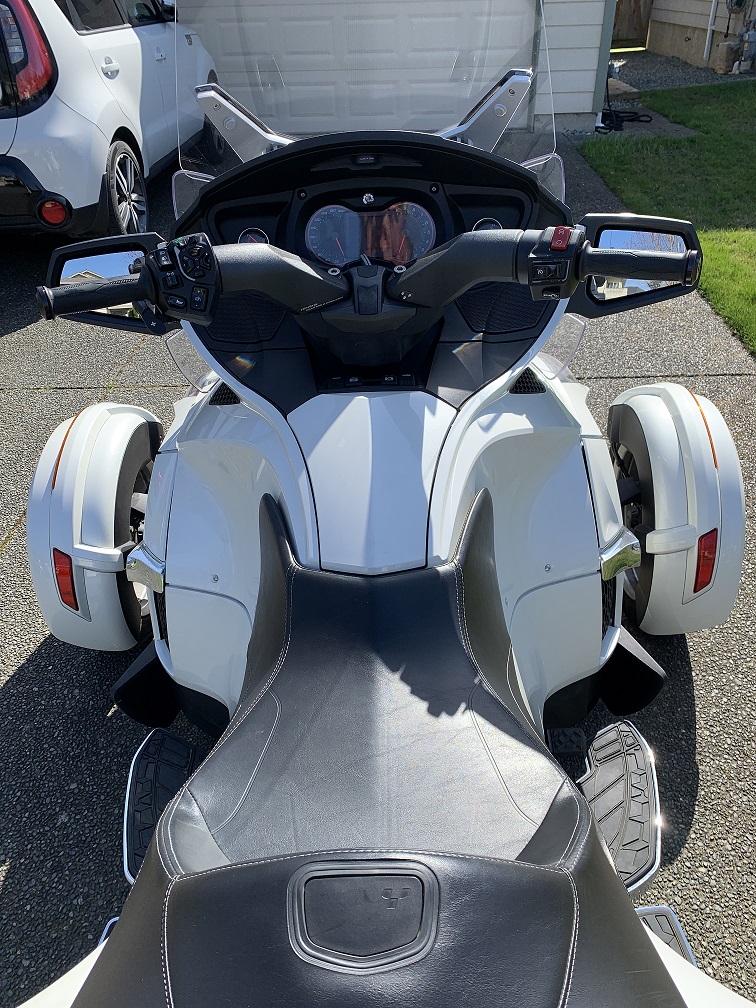 Gosh, that is nice! I did my demo ride today on a new RT Limited Sea-to-Sky model. I enjoyed the demo (about a forty minute ride) and was mainly accustom to the handling/shifting/etc. by the end of it. VERY smooth ride! We went over some undulating roads and it was smooth over all surfaces. I rode the '79 GL1000 ~45 miles to the dealer and it ran great! My neighbor followed on his Spyder and ended up taking a demo ride, also. As pricey as the new GoldWings. Nice big throne back there for SWMBO, but she didn't go with me today. I would like to put it off for a year or two, and would probably buy new unless a great deal on the 2021 model comes up. They have squeezed a couple more inches of seating room into the newest ones.

Let me know how the trailer hitch goes. BRP seems to only want to sell you their trailer and hitch. I have seen Uni-gos behind them, so I know it can be done.

Wow nice, congrats to you both!!

Treat Sonya right, you have a special woman there.

Just remember no lane splitting now Ernest. Looks like you have a great deal on a good looking machine! :salute:

Thanks Gents. Dan, yes Sonya is quite special - wouldn't have bought the Spyder if she would not ride on it. She likes to chat while riding, know she's not snoozing when she's on the back. She has nodded off on the GW from time to time, so I expect that will happen on the Spyder as well.

No lane splitting even on the GW, couple of axe handles wide in the rear if you get my drift, and same vintage as myself. :music: Too good a deal to pass up, damn near NOS at half the price. Hadn't planned on jumping ship quite so soon, but have to go when opportunity knocks. Took it out to my friend who started this past weeks events. He was suitably blown away by the condition and what it is - I think he wants an RT LE, probably see him looking for one and then selling the 2018 F3 LE. I thanked him for the push. PO left his bill of sale in the "frunk". Expensive little bugger when he bought it.

If it were me, I would be on the lookout for a very low mileage 2014 and up RT Limited Edition. These are out there. The couple I bought from had decided that on retirement to travel extensively, but for whatever reason(s) this did not happen. His health also contributed to the sale. Any Spyder RT LE between 5K to 10K miles would be excellent. Mine translates 9K Kms to approximately 5K miles, just a good demo buy.

Looked into the trailer hitch for the N-line trailer hitch. There is an adaptor for a ball hitch. Talked to the service manager at N-Line as I posted. Canamspyderaccessories.com has a plug/play wiring harness for the Spyder. This company is out of Quebec, but has the prices in USD. Must do more sales in the US.

Checked out the front shocks. These are the OEM factory shocks with no adjustment. Tells me that these are the least expensive shocks that could be found to do a reasonable job until the warranty is finished. Will be looking into a shock replacement. This has been mentioned on the Spyder forum(s).

That is a real nice ride Ernest! :good:

Thanks. Every now and then something is dropped in your lap and either jump, or say damn, coulda, woulda, shoulda. This was one of them. Now to sell a couple of bikes to offset the pain.

Thanks - nice ride you have. Would like to get an older car, like the classics such as a '69 MOPAR - just don't have the room and I'd want to tinker.

Pidjones asked about towing an N-Line trailer, shouldn't be an issue; however, the hitch assembly is different from a standard ball. The connector is specific to this trailer. An adaptor would have to be made. I'm talking to the owner of N-Line trailers and he has one collecting dust. Here is a pic of the hitch with the N-Line trailer connector: 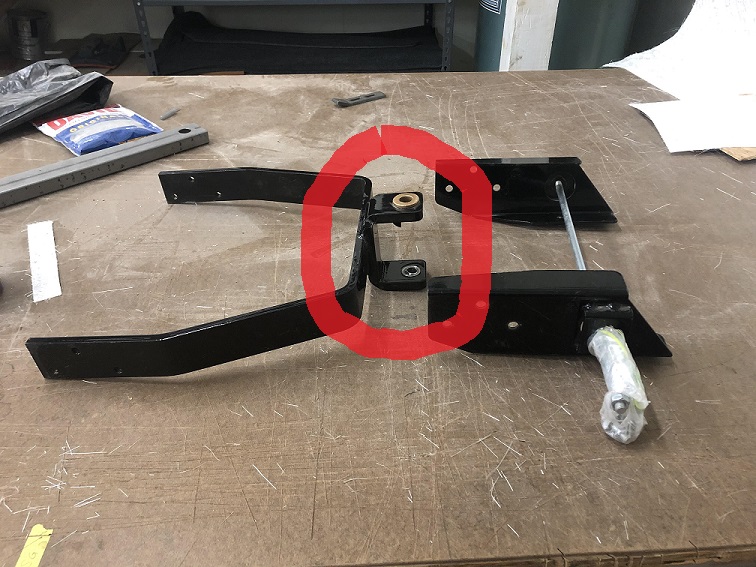 Will be talking to him next week and discuss cost, shipping and such. The N-Line trailer weighs in at 80 pounds and has a mentioned capacity of 100 pounds. Not a lot of weight by some standards. Thinking the carrying weight is because it is meant to be towed behind a motorcycle. Capacity will now probably be dictated by trailer volume - will ask the owner about this.

Uni-go has an adapter for their connector that just bolts in place of the trailer ball on a normal hitch. It could easily bolt to the Spyder hitch. I don't like that the Spyder hitch is attached to the swingarm, but have seen Uni-gos behind them. The Uni-go adapter is available from Texas Motorcycle Trailers Plus https://www.uni-go-trailers.com/ They have been very responsive (unlike the actual manufacture's sales department).

Waiting for a quote from the Can-Am dealer in Kodak.

Looked at the Uni-Go before I bought the N-Line. Couldn't get the Uni-Go when I wanted it. The N-Line has an adaptor that fits where the ball goes. Hooking the trailer hitch to the swingarm seems to be what is the going practice.

A quote - things are going warp speed. Any nibbles on the 1800 - just wondering?

A quote - things are going warp speed. Any nibbles on the 1800 - just wondering?
Click to expand...

No, I haven't even advertised the 1800 yet. Waiting to see what they will offer on trade (since they don't have ANY GoldWings in stock in Kodak, and just a couple 2021s "on order" at their other stores). This is a big dealership, too. Right at the exit for Sevierville, Pigeon Forge, Gatlinburg, Dollywood, the Smokys. Multi-line dealer but right now mainly ATVs and UTVs and a good stock of Spyders.

The 1800 has "Full Monty" Traxxion suspension, which should add at least a thousand to the price. I'm willing to take anything else off of it. I have put the '79 GL1000 on Facebook Marketplace, but primarily to advertise our vintage motorcycle show next weekend. I'll update that ad after the show. Might take it to the show, but doubt it as I'll be driving my truck pulling a trailer with the Hunley (just changed the oil and filter in her).