Gerry - have had a look at the electrical schematic and with this comes a better understanding and things to look for. The power to the thermo switch goes on/off with the key, not high on the culprit list.

The culprit is not the engine stop switch, but always want to pick on the little guy. Power into the system can only come through the ignition switch, or the wire from the starter solenoid to the CFI Main relay, brake light and air pump relays. These are hot at all times. The tail light relay has power supplied to it at all times from this circuit, but power flow to fuse 3 in the fuse block can only occur if there is power flow through the ignition switch. The ignition switch provides the trigger power for this relay.

Power is on at all times to the 7.5 amp fuse that is in the left side front fairing pocket, but the fairing is not on at this time and there are no additional power connections after the 7.5 amp fuse.

Today is another day of investigation and hopefully starting and letting the engine run for a while. Need to make sure the rad fan comes on when it's supposed to. Will be temporarily installing the exhaust system.

Looking at the PDF re-ignited my old headache! :hihihi:

I had to figure out each fuse and rely and how they went in and out of the fuse/relay panel before reconfiguring the whole thing for use on my 1100 AND, then wiring it into my harness. I still have all of my notes and I do remember questioning back then why the white wire needed to be hot all the time for the circuits it serves. Even though power from it is only on one side of the relays and not activated until the relay is triggered, it sure left an opportunity for battery failure if a relay sticks on and the bike is shut down. Parasitic drain has killed many a battery.

I can only suggest performing an ohm test to see if power is flowing with the key turned off and then pull one fuse at a time to see if the flow stops.

Thanks for looking and to hear about your experience. To think that this bike has fewer relays than the 1500, and the 1800. Going to look at an ignition switch from a 1500. Have the 1500 manual, should be able to cross reference the connections.

Found the diode. It's tucked nicely away and it is a different size then the one for the clutch diode. Was wondering why when you ordered these you got two different sizes.

Will still look into the electrics, but connected the exhaust temporarily, and operated the engine through two fan cycles. Installed a fan from an 1800, fits nicely and works well. Uses a bit less power than the 1200 rad fan.

Last trial is to go through the gears and make sure all is well, then a full torque all round.

LED lights came in. Will order some resistors as well.

Another work day. Got the shaft line taken care of. Did what my father always mentioned, go back to the beginning. Took the swing arm off, installed it, got the shaft in and on the U-joint. No more noise.

Started the engine and put in gear. Have first and second, but no other, gears. Going to look at the external linkage, keep the engine in the frame. Look at the easier things first. Worst case, engine out and look inside. Should be easier second time round. Noticed oil on the right exhaust ports. Have borescope, will look at the cylinders through the plug holes. Have to drain the coolant and oil anyway.

Good news is that from what I have read on the various forums, I'm not the first to have this happen, probably won't be the last.

Going to spend the weekend doing the back of the bike. Have a bit of wiring to do, saddlebags can be installed and make it look like I have progress.

Did you remove the transmission gears or shift forks, or the front detent mechanism? I had a problem similar with not shifting. Something I didn't put together right. Seems like it had something to do with the shift forks.

It was down to nothing, everything removed. Took the water pump cover off this afternoon and it goes into first then when I go into second, the mechanism does not rotate far enough for the shift lever to hook into the small pins. Will take this mechanism out and put back to determine if I have to take the engine out. Will be a bit faster process if I have to.

Have done more investigation. It is not the external shift mechanism. Have to go into the engine. Hadn't wanted to but a necessary evil. Word for today - CRAP. Should go a lot faster this time round.

Oh my my that sucks

Gets easier the more you do it. Should have the engine out tomorrow, and on the bench. Possibly have the case split as well. Have to go out and get some cookie pans to catch some oil when I remove the rear cover. The good news, can't go anywhere anyway.

It was 1100 engine I was working on. Seem to recall one of the shift forks can go in flipped which caused it to just ever so slightly bump into the case. I made damn sure to shift it through all the gears the second time opening the case.

Going to do the same. Thinking I might remove 2 and 4 pistons so I can easily mate the cases, and use the shift lever before finalizing anything. The shift forks are marked for front/back and orientation of the forks on the shaft. Had checked before, but never know.

Will be leaving the clutch assembly intact, no need to remove this when splitting the cases. Hoping to leave the rotor installed on the alternator shaft as well. The alt pulley and timing belt gears on the end of the crank shaft should not have to be removed. Will update on this after I'm finished sorting out this issue. Most of the OEM recommendations regarding a tear down is to get at all the parts and pieces for measurements and such for possible replacement of parts.

Had the transmission main shaft apart to install new damper rubbers in the primary drive sprocket:View attachment Primary Driven Gear.pdfwill be checking this. Had to have the machine shop remove the bolts that has the bearing that holds the exterior case bearing holder. Hopefully got it back together correctly as well.

When I did the first install of the heads and compared the head gaskets, OEM versus aftermarket, these were practically identical with the exception of the compression ring around the cylinder(s) having a bit less metal. I also noticed that the hole that fits over the oil control orifice was large enough to fit over the External O-ring that sits on the case surface. This allows the head to compress this O-ring to seal: 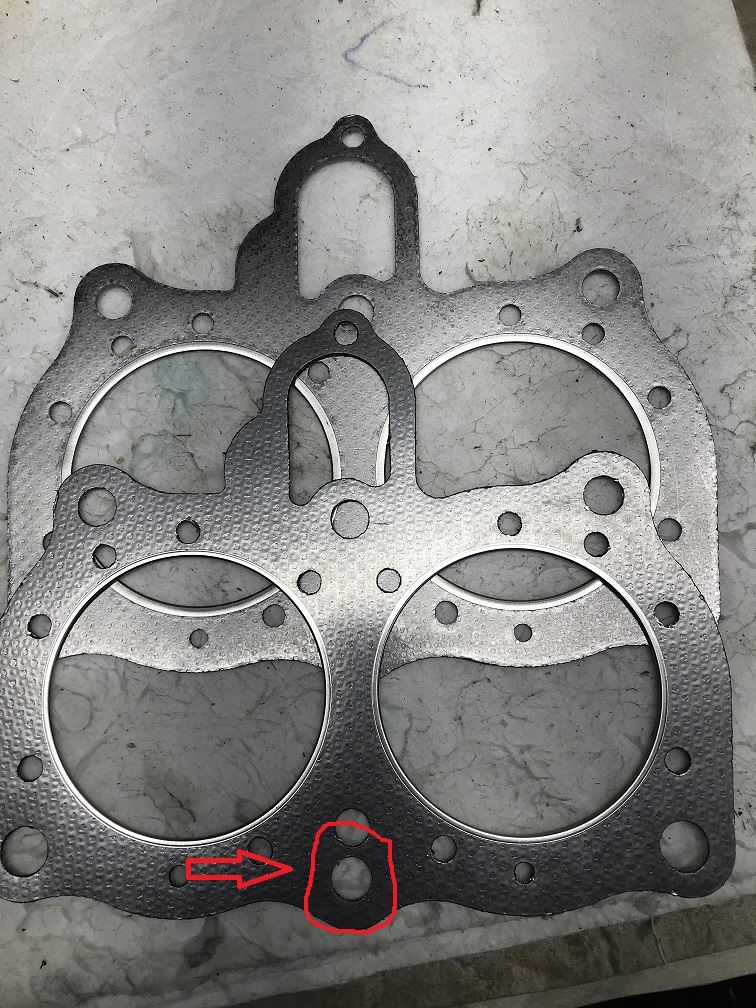 This hole was significantly smaller with the aftermarket gaskets I used when I had the heads done a year or so ago.

Looked at the Clymer manual and compared the explanation to the OEM manual and Clymer seems to be a bit more detailed/clear, and the picture examples are much better.

It will get done. Took the air chamber out, disconnected all the sensor wires and such and removed the heads late yesterday afternoon. Engine is almost ready to come out. Clutch slave to remove. Was able to remove the heads with the water joint that holds the water tubes to the head attached, saved two gaskets. Noticed a bit of oil on the right side of the engine case. Think the crush washer(s) for the oil passage pipe on the top of the engine case(s) need to be replaced. Have the main gaskets to put the engine back together. Small gaskets will be made, and have a good assortment of O-rings, so should be good.

Slight setback. To console the wounded ego may have to go to Dairy Queen for some ice cream such as a blizzard. Might go out for breakfast instead. Choices.

Engine out, on the work bench, cases split. Had a good look at the internals. Shifting forks can only go in one way. Shifts up and down, but there is a hang up every now and then. Will be looking at the shift drum tomorrow to make sure it is together as per the manual(s).

The only item that I can see that is not quite right, thought it was, is the support bearing on the shift drum. It is proud by about 1 mm, and this allows the shift drum to float, but maybe too much. My experience is that a bearing generally sits flush in the bearing housing. Will confirm tomorrow.

1mm off? No room for error it looks like.

When I mentioned this, and because I had to replace internal bearings as well, this drum shaft bearing being proud of the case is different. Not used to seeing this - could be just the way it is. Too much play/float in the shift drum may not be good. Other than this, will be looking at the countershaft.

Checked the shift drum support bearing housing. It is approximately 7.1 mm in depth, the bearing is some 7.9 mm. Looked at the pics in the Clymer manual and you can see the bearing just proud of the case. On to the next.

Took the shift forks out and made sure there were no burrs or whatever.

Had a good look at the countershaft, compared against the manual. All is as it should be. The main transmission shaft is the same. 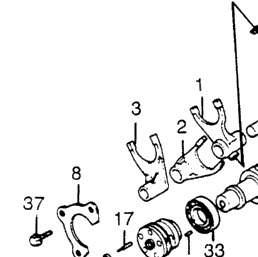 Took numbers 2 and 4 pistons off so I could lower the left case on to try out the shifting. Looks promising, but will do a better trial tomorrow.

When did this start? Was it shifting okay before it was opened up initially? Backtrack your steps or take a break from it before buying anything. It's probably something simple. Pay attention also to what's going on in the detents, that nothing funky there hanging up.

It was fine before I started the rebuild. I like simple. I have a few thoughts such as the shift drum should only rotate not move back to front. I will find the issue.