Put a coat of CERAKOTE on the FD. Not as good looking as the 1200 that I had done, but it will be easy to keep clean.

Been a productive couple of days. Slowly working from rear to front.

Been using blue loctite on most of the smaller bolts. Noticed these were loose when I took the engine out and apart.

Picked up a 1.13" long by 1-1/4" diameter aluminum spacer this afternoon. Will be drilling the centre hole very soon.

Have to tighten the timing belts, put heat shield in, brackets for external alternator, rad. oil and coolant, front and lower fairings.

Fuel system test will be done soon. There always seems to be a leak at one of the fuel fittings - an annoyance when system under pressure.

Noticed a couple of broken wires at a connector. Fix before I go much further.

Rednaxs60 said:
Been a productive couple of days. Slowly working from rear to front.

Been using blue loctite on most of the smaller bolts. Noticed these were loose when I took the engine out and apart.

Picked up a 1.13" long by 1-1/4" diameter aluminum spacer this afternoon. Will be drilling the centre hole very soon.

Have to tighten the timing belts, put heat shield in, brackets for external alternator, rad. oil and coolant, front and lower fairings.

Fuel system test will be done soon. There always seems to be a leak at one of the fuel fittings - an annoyance when system under pressure.

Noticed a couple of broken wires at a connector. Fix before I go much further.

Today was another good day. Time to check off several items.

Going to have it outside and ready to go on first start. Have read many a thread on break in for an engine and had the same mindset; however, information on the web disputes this. I have had to do a 180 regarding this issue considering that engine rebuild shops, racing teams immediately dyno engines that are freshly rebuilt, no break in period. Mentioned this to my brother. He mentioned that on one of the courses he had to take when he was getting his mechanic's license, the instructor disputed this as well. For myself, I will just ride the 1200 as I would normally.

Few more things to take care of, but the end is definitely in sight.

Fixed a broken wire on the large connector for the travel computer. Installed the air filter.

Fuel system pressure test. No leaks, first time ever that I have not had a leak after having the fuel system apart, very impressed with myself if I don't say so - yes my arm is sore from the pat on the back.

Started the engine - sounds good, will check cylinder bank balance and set idle if needs be.

Bike is back together. Took it for a road test and gas. Not firing on all four cylinders - hmmmmm. Will look into this. Was before engine work so must be something just not right. Will be checking this week coming. Next time I have it out will bring it in and do a compression test.

Finished the kitchen backsplash this morning. Had to silicone between the counter and backsplash. All done, my job in the kitchen is finished.

Spent the rest of the day troubleshooting the 1200 engine issue(s). There is a water hose that goes in front of the right timing belt cover back to the IAC valve. This got too close to the alternator fan belt and a hole was carved into the hose, coolant started to go all over. New coolant hose, with a bit of route change and all is well.

Looked into the firing issue. 1/3/4 are firing like a good thing, and have 155/160 compression. Checked #2. Have spark to the plug so all is well in the ignition system. No error codes on the ECU for the injectors, but did a change up just in case no change. Next look was for compression and none/nada/zilch - ZERO.

Thought about this. Only thing I did to the head was removed a shim from #2 intake. Put shim back, no change. Installed an additional shim hoping the valve might just be off the seat, no change.

Next test will be a leak down test. Need to determine if it is the head or the piston rings.

This engine is definitely testing my resolve.

Not much happening on the 1200 at this point. Heading to Ontario tomorrow morning to see Mom, not doing well so I want to get back before she does take a turn for the worse - she's 89, 90 in March coming. Been a couple of years since I was back.

Have been discussing the issue of no compression in #2 cylinder with my brother. It has us baffled, but until I get back it will have to sit and wait. Leak down test will give some insight. Will address this issue when I get back. The only issue I don't like is having to replace the head gaskets every time, but a necessary evil.

Have been thinking about this retirement project and how it is progressing, and what it costs. I liken this to the older vintage cars and how much more is spent on them just because. My '85 is the same, and a bit of a test bed for alternative parts that have been used to keep these on the road. Next test/trial will be 1100 spark igniters.

The 1100 spark igniters are 5 wire instead of four. Thinking the blue wire (mentioned to me in a previous thread) from the pick-up coil is not needed.

No compression could mean the hydro adjuster needs to pump up. Had that happen on the 1200 I worked on. Took a bit of cranking with the starter before compression came up, close to a solid minute.
Last edited: Sep 18, 2021

Not much happening on the 1200 at this point. Heading to Ontario tomorrow morning to see Mom, not doing well so I want to get back before she does take a turn for the worse - she's 89, 90 in March coming. Been a couple of years since I was back.


As we go forward, in these perilous times, it is important to go visit family.

I went to see my son last month, been 5 years since we saw each other.
Signed over the title to my gl1800 for him to enjoy,
We managed a few rides together, me on my Piaggio MP3
S

I know how you feel, I have a 1984 GL1200A trike. bought it for 2000.00 originally and have put over four times that into fixing, updating and upgrading things to get it where I want it! Necessary evil i guess.

Thought about the '85 Limited Edition carcass that I bought. To get the engine home from Ontario, going to take it apart, easier to lift in and out of the car and place heavy parts in the middle of the car, lighter parts can go anywhere.

Dan - had thought of the hydraulic adjuster going bad. Will take the #2 cylinder adjusters out and prime, could work. May have to change with the old ones. Have a few other items I want to check as well. Thinking I might have the heads off the '85 carcass engine refurbished jus in case. Lots to do.

Dan - still working on adjusting the throttle stop screw for the TPS calibration. Wondering if you could measure the height of the "tit" on the stop screw - distance from the plate it is screwed into. Pic attached. Be greatly appreciated. Can do a sketch when I get to my brother's place on Tuesday if it will help. Pic of the stop screw attached. You can see the "tit" I'm mentioning: 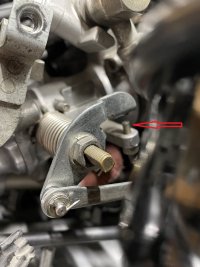 Moved the 1200 Limited Edition carcass into my brother's garage and started the process of removing what I want. Fluids being drained out. Tried to turn it over, moved a bit then stopped. Intend to strip the engine down for transport, too heavy to in/out of the car.

Noticed there are SS brake lines from the front calipers, and front brake MC, will be saved for the collective. Going to be labelled on removal.

Brother has some other tools he is divesting himself of and I hope to be the beneficiary.

Going to have some '84 parts available as well when I get home. Thinking a list free for the taking, pay the postage. More to follow on this.

There are two 1100s for sale in this small town. One complete, hasn't been on the road for a while, the other is complete but the owner started to take it apart and has sort of lost interest - carbs are off. Talked to his father and he offered me the bike for $500.00 CDN. Realistic would be closer to $200.00 CDN or just let me have it. Engine started and running this past spring. Basic maintenance, carbs south for rebuild, and back on the road. Estimate a $1000.00 CDN bill for a good daily rider. Would like to tackle a carbed GW, but not in the cards. Unfortunately, I'm in Victoria, some 4200 Kms away.

I mentioned some years back that I had cush dampers for the 1200 rear wheel. Have the SS rings for making the cush dampers and several sets already made. Going to go through the bin, pick out 3/4 ready made sets and maybe a couple of sets of rings, then turf the rest. can't keep everything forever.

Have a set of used air shocks for a 1200, came off an '85 Limited Edition, held air when this was done. Need gone. Free for the asking, pay postage.

All for now. Cheers

Good day here in the soon to be frozen north. Mom's feeling better, but this can change. Have the engine teardown going well. Mentioned that I could not turn it over. Found a lot of dirt/crud/rust in #4 cylinder preventing the engine from turning: 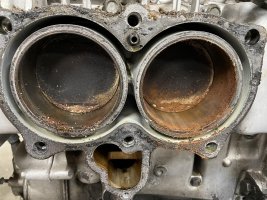 There is always a bolt that resists being taken out. There is one for the water pipe on numbers 2-4 cylinder head. 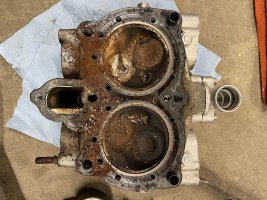 Once the heads were removed the engine turned over very easily. Thinking the rings are seized, will find out over the next day or two. Cylinders 1-3 were quite good: 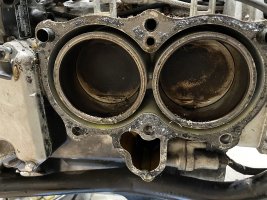 Tomorrow is another day, more work to do.

The engine has been completely stripped, time to start cleaning: 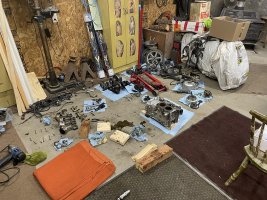 The con rod and crank journal bearings are in excellent shape. The piston rings were not seized, but replacement rings are available. A light cylinder hone to clean up the cylinders. Estimating $200.00 CDN to get the engine back to an operational state. Pleasantly surprised with the condition of the engine.

Great job there Ernest, looking forward to seeing it come together again.
You must log in or register to reply here.