Good afternoon everyone, I have spent 3 months gathering working on and finishing my single carb conversion (oh and riding the heck out of it).

Mainly wanted to post to say thank you everyone on here! That and document the resurrection of my fathers 1986 GL1200A 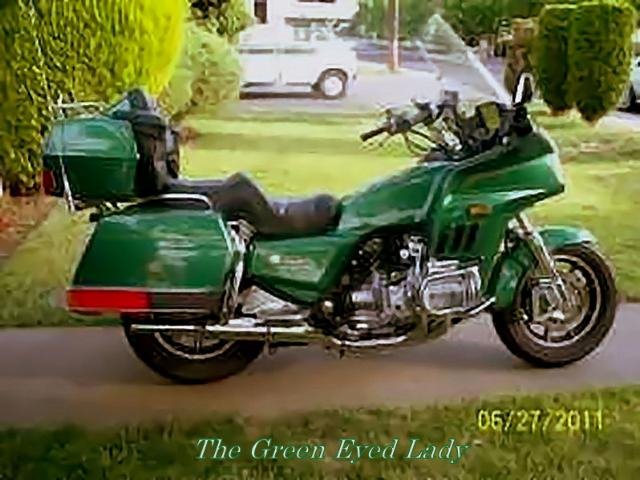 After getting my father into riding again in 2011 he scoured the internet and sourced this beautiful green 1986 GL1200. 100% ready to ride at the time and he enjoyed every second of it. He nicknamed it "Green Eyed Lady" an ode to the color and of course Sugarloaf. He would mainly explore Yakima valley Washington on her and was a very avid geocacher and the Green Eyed Lady was his main companion for it. He parked her for the last time when he was diagnosed with leiomyosarcomain 2012, a smooth cell cancer that eventually took him in 2014. My mom passed it down to me a few years after and it was in poor shape from nothing more than sitting too long. Carbs gummed, choke seized, fuel bad, and more. I think you guys know how that goes. It had been partially running after the stock carbs were rebuilt and I put several thousand miles on it over 2014-2015. It ran well enough to get around but nothing was quite right on it and could never get it nailed down so it ended up stored mostly again with only the occasional ride until she stopped running fully and sat again in her bike barn until October 2020. 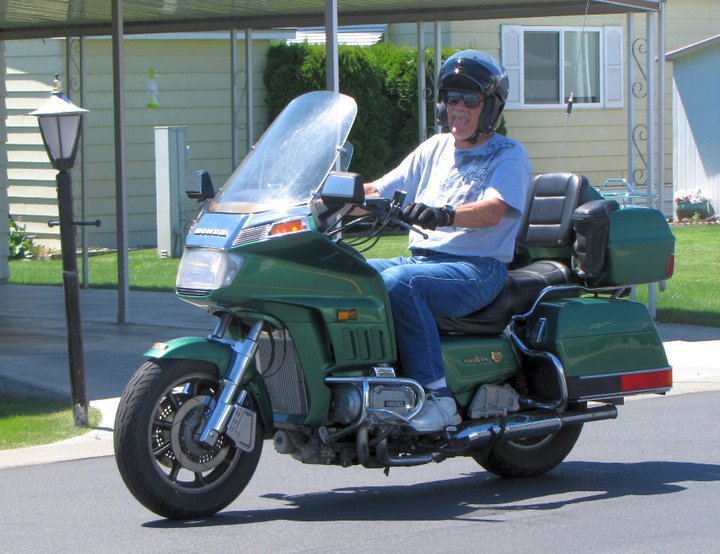 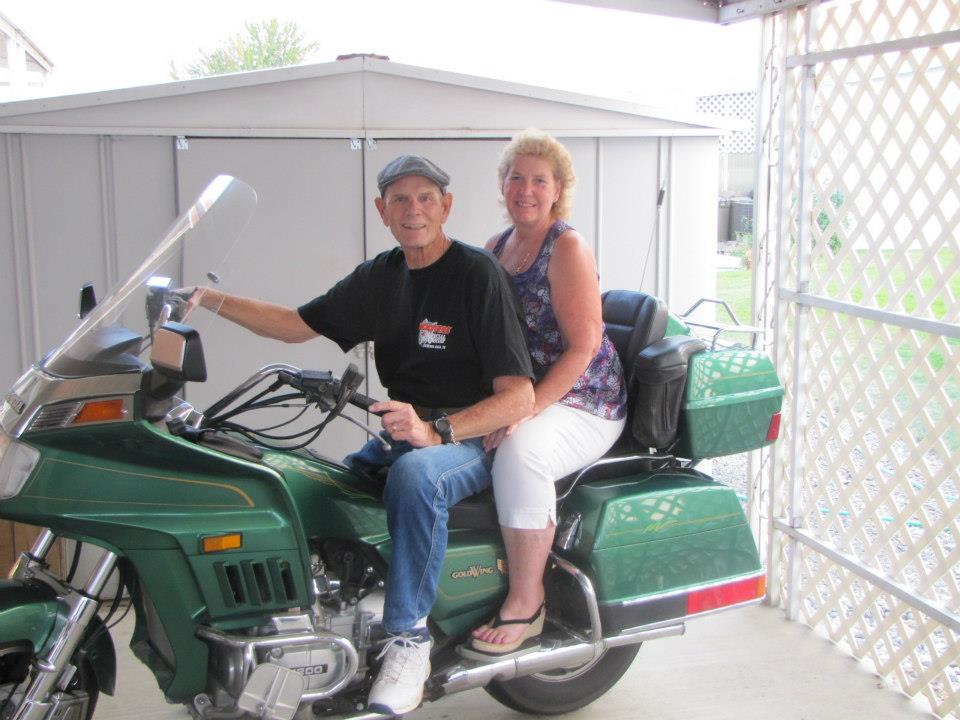 and his last time on her.

I pulled everything apart, decided it was time to diagnose this properly and do it myself as well. Found the carbs were pretty shot. Slide diaphragms toast every thing plugged and after a thorough cleaning I found the worst part of it is both right side carbs had damaged posts for the float and would not allow the needles to seat. I had a decision, replace them with another factory set from ebay or after some searching I found this wonderful place (as well as a few other wing forums with good info) and attempt the single carb conversion.

Heavily weighed the pros and cons and settled on going the single carb route, with making a DKL style pvc manifold, and a 34pict-3 carb. Mostly it would be very cost efficient and my carb experience in so rusty I loved the idea of a new reproduction unit that was a single, easy to clean and jet, no balancing issues, auto choke, and lots of great reviews I jumped in.

Game plan in place, and ordered the requisite parts from DKL's list and went to town. Surprisingly it went quick to get the manifold built and mostly to my liking. About a 3 day process in total had it painted, mounted, carb in place and ready to test fire on initial settings (2.5 out on both screws). Fit and go slow if you try this, just make sure its going to be solid for when you get everything together. I pulled the manifold 3-4 times for fit and finish and it was all time well spent.

Carb on, everything bolted, lets go!

Test 4: She Runs! (leaks fuel like crazy from the factory fuel pump) Removed and replaced factory pump and all lines with Holley inline fuel pump.

Ended up fixing all of that fairly easy, mostly just gummed up and rusted contacts in the switches in the handlebars and a rusted throttle cable.

The bog, this dreaded bog everyone on this forum either has and hates, or tuned out and loved the SCC. I finally solved the bog after several weeks or just test driving and tuning. For my 1200 it wanted around 2 turn bypass screw (large) and 3-3.5ish on idle air mixture screw (small). Kept the out of box jetting as is.

For me this fully fixed the bog at 2300 rpm from off idle. Lots of small rides and tinkering between and I'm super happy with the way she is running, much stronger that the factories were previously. Lots of low end torque with a little bit of fall off in the upper end but I prefer that here.

Overall I would recommend this conversion to others if they are in a similar situation and able to do the work required. I think overall I spent about $500 for everything and the Green Eyed Lady is back at it again. I was at my wits end trying to chase the factory carb problems and I kept telling myself if I had to pull that damn rack again I'm selling it finally. For me the SCC conversion kept her in the family and enjoyed once again.

Thank you so much from the bottom of my heart to everyone on here with such amazing and detailed information! His 69th Birthday is tomorrow and I feel it only fitting to have her back in great condition now. 600+ miles in the last couple weeks on fine tuning and testing trips to slowly get things just right. Lots of little fixes but today is the day I've decided it doesn't need adjustments but to be ridden.
:thanks: 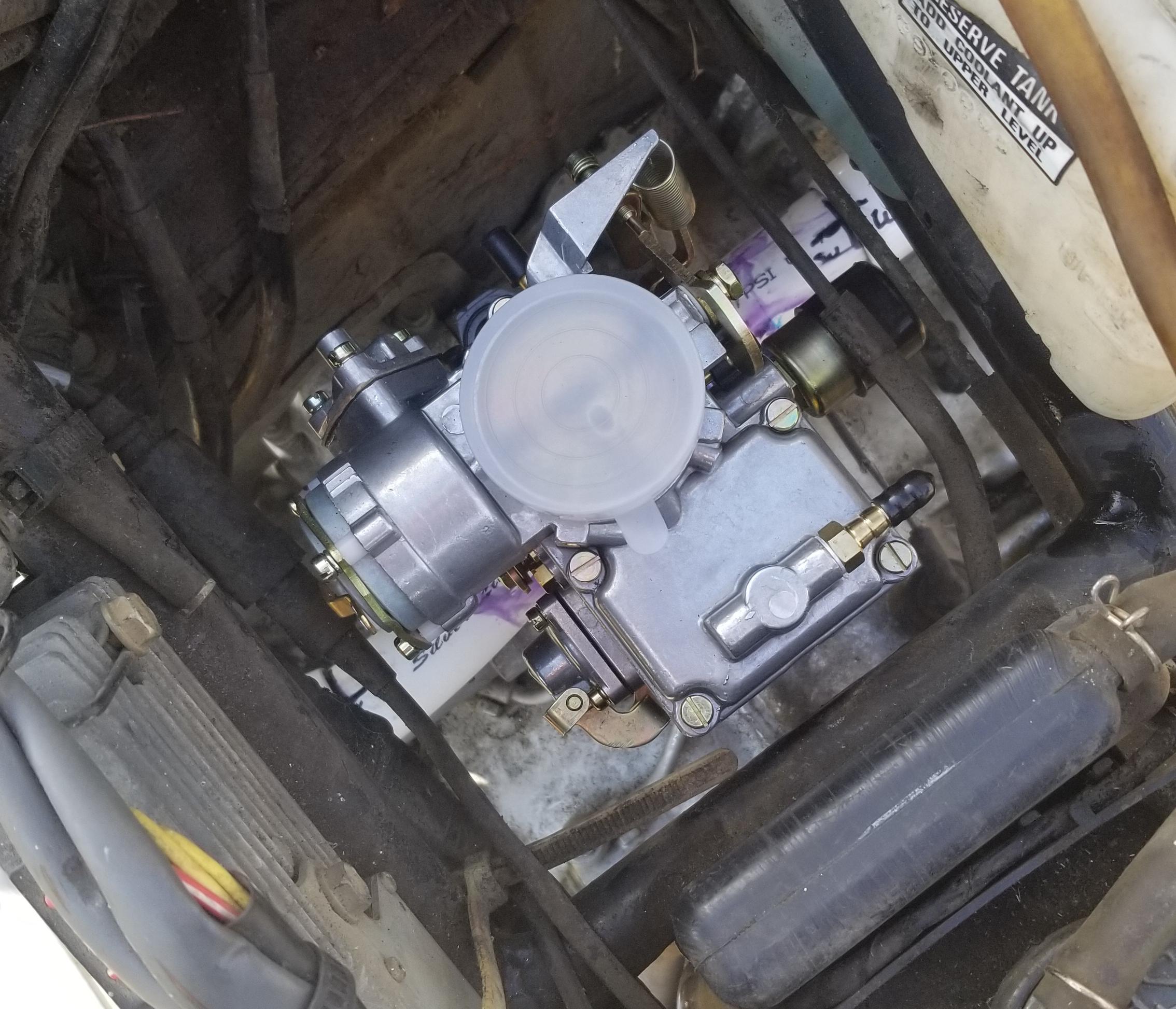 Final fitment (not the best pic)

After tests 1-5 are done, this is how she sits. Running but not riding.

Finally clean, tuned and ready for the roads.

Good job on her and I love that green,never seen it before

I've tried to find more information in the past on that color but cant seem to come up with any and as far as I know not a factory Honda color option. Whoever painted it did an amazing job because all the labels are still in place on the panels and they taped and panted right up to them including the underside of the panels and you can feel the pinstripes are the old school hand painted style and not just the pinstripe stickers.

Fine looking ride, my wife's favorite color! Glad you got it back on the road.

Yes SCC CAN be the best thing a oldwing can be modded with ...great story

Great story on the conversion to SCC and an even greater tribute to your Dad! :thank_you:

Congratulations!!! Your post could not have been more timely for me; I'm in the first steps making the SCC on a '75 GL1000 that has not run since 2007. I'm using the same carb you used with a manufactured manifold. I ordered the parts from the internet and they started showing up Saturday, more are on the way.

[url=https://classicgoldwings.com/forum/viewtopic.php?p=220693#p220693:kh4x4m7y said:
Lowrider Bud » Yesterday- 8:14[/url]":kh4x4m7y]
Congratulations!!! Your post could not have been more timely for me; I'm in the first steps making the SCC on a '75 GL1000 that has not run since 2007. I'm using the same carb you used with a manufactured manifold. I ordered the parts from the internet and they started showing up Saturday, more are on the way.

Awesome and good luck on the conversion! The manufactured manifold seems like an amazing way to do the conversion. Good luck and I hope it all goes really smooth for you.