We are basically stripping the bike(s) down to build cafe racer(s) and there are a ton of good parts we don't want to go to waste. The previous owner took really good care of the 1981 bike. I believe he rebuilt the forks and brake calipers not long ago. The burgundy paint looks to be in good condition besides a few scratches here and there (see left side of front fairing). We will be mostly using just the frame, motor, fake tank, side covers, real tank, fenders (possibly), rear wheel (possibly). But the entire front end, minus the switches on handle bars (at least until we can get the wiring diagram drawn out so an after market set can be installed), if we go with an M.unit which is highly probable then the complete wiring harness is up for grabs. The 1983 we are picking up in 2 weeks but it was apparently just kept in storage for years, so it just needs a bath. The 1980 is already naked, so basically just the complete front end will be extra, along with the wiring harness and maybe some other odds and ends. Which the same goes for the other bikes. If you need something just ask, the worst we can say is someone already beat you to it. You can email me direct at [email protected].

We mainly build cafe racers, so the other bikes will be parted out in the same manner such as the 1983 GL1100 we are picking up next week. After doing fork swaps we still have the front ends from the 1980 GL1100, 1975 GL1000, 1980 CX500, and few viragos available as well. If you are interested in any parts from the bikes we currently have listed and being worked on feel free to message me. As long as it's not frame and motor, or something you would normally see on a cafe racer then most likely if we still have the parts they will be up for sale. Either way it won't hurt to ask, it's the squeaky wheel that gets the grease, right?

We currently are looking for nice set of 1976 GL1000 758a carbs we can rebuild and use on one of our bikes, if you have a set we are open to trades or even just buying outright. We are located in Everett, WA 98204. https://www.ViragoCafe.com. Thanks for viewing! 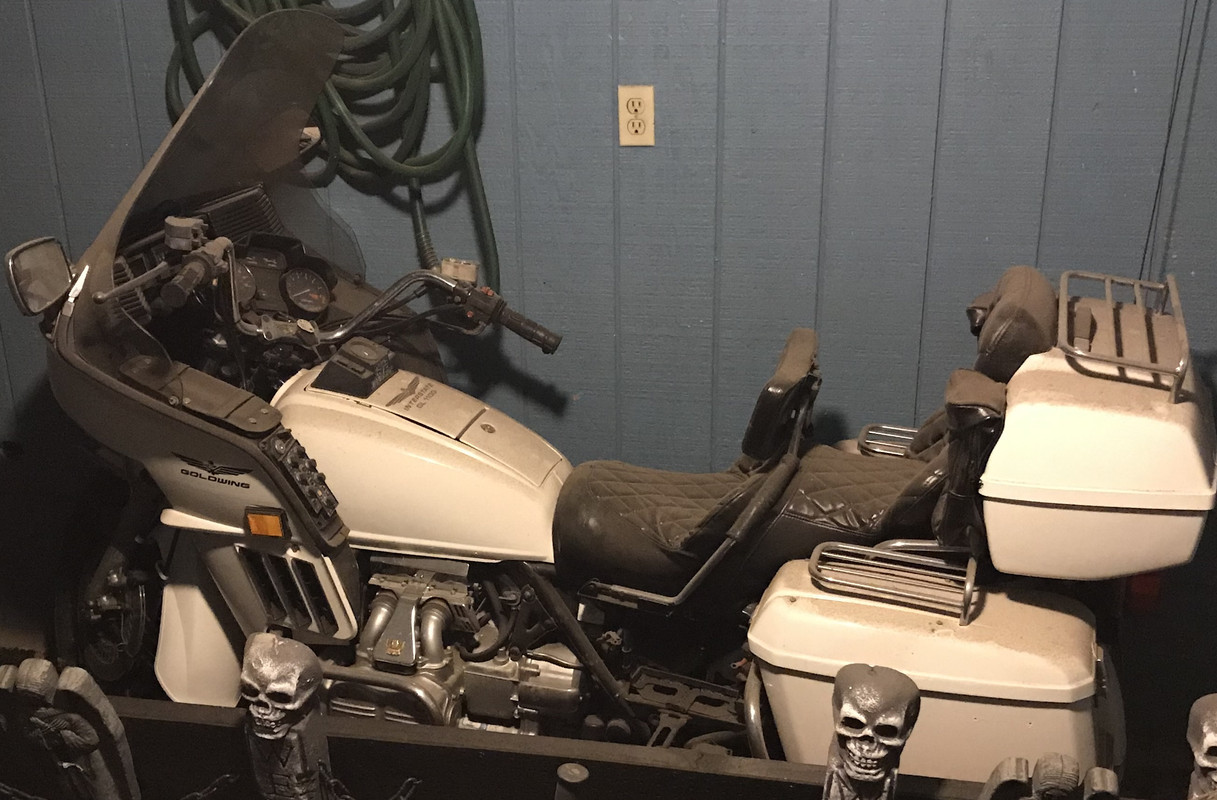 Just the complete front end (the handle bar switches / controls not included) but the rest of the front end is after removing the triple tree from the frame so the front end remains complete and in a like new condition including the ignition with key, triple tree, handle bars, gauges, forks, wheel, & brakes are still available for sale or trade if anyone has some 758a carb bodies for cylinder 1, 2, & 4 (that's front left & right, and rear left bodies).

The previous owner saved everything, including the old parts after repairs. So I have boxes of packages of old parts that came with the bike that lets me know various items were rebuilt such as the forks, calipers including new pads, rotors, grips, and various other components. The previous owner meticulously maintained this bike, riding it often on many long trips up and down the freeway from state to state.

I'm looking for a stock seat for an '83 interstate in good condition. My new purchase came with a nice custom seat that is too wide to let my short legs reach the ground!
V

I have a few of these King and Queen seats or what ever they cal them.

Was the seat something you wanted to buy or trade for the 758a carbs I'm looking for?

Sorry, no carbs available, but lf one of those seats is in good condition and will fit my '83, I'm interested in price and shipping to Buffalo NY 14228.

How about any seat pan from 80-83, cover condition not important. Price?
V

I have a 2nd seat that the cover is falling off due to the pan is rusting around the edge and some of the spikes that the seat cover hooked onto have fallen off. It is mostly structural sound, but some of the edges or corners have rusted away. It could still be used, as an upholster myself depending how perfect you wanted it I would either cut out the bad spots and weld in new steel that could be shaped to match the factory pan perfectly. Or you could sandblast the weak spot away and then coat it with fiberglass you could shape. Or just grind off paint and rust then get some strips of heavy leather or lexan and pop rivet it around the edge of the pan. You could use that new material to help reshape the edge of the pan that have rusted back some and when you cut the foam cut it to the shape the pan should be so it over hangs and rusted out spots. When you stretch the new seat material over the strips you attached they will appear to be the edge of the seat pan, so once the cover was attached it would appear to be the stock shape. Some cheaper seat makers choose to pop rivet the seat covers to the bottom of the seat pan, but it is tough to pull the seat cover evenly around all edges while pop riveting so the material stays totally flat and doesn't appear to pucker at all from under the edge of the seat pan. Having a strip to staple to is much easier to get the cover on square and evenly stretched all round. I would attach strips under the edge of the pan not matter what. That way you can start by stretch the material over the seat and tack it in each corner so you know it is square. Then move half way down either side and wrap the material over the egde of the seat and tack it into place. Continue working your way around each side attaching the next staple in between the last ones. This will help ensure you have the material stretched evenly and it is not stretch around one side farther than the other causing the seat foam to condense more on one side than the other giving the seat a crooked or twisted look when you are done. Either way it will take some work to make it perfect again. You could even just use it as a mold and make a complete new fiberglass pan. Let me know if interested, I could even do the repair for you and ship it out ready to go if you prefer.

Here is the good seat, it has a plastic pan so there won't be any issue with it rusting out like earlier models. Its a factory cover I am sure, the chrome trim looks near perfect. There is no holes or weak spots that I could tell. There are a few places where the black vinyl has faded slightly from the sun. If you prepped it right and did a coat of black vinyl die it look brand new again, this is something I can do for you if you wish. Its a pretty easy process you just need the right materials and get an adhesion promoter made for dying vinyl, then just put on as much dye as it takes to get a uniform color. They also make a clear dye that helps as a top coat to lock the color in so it won't wear off as fast. I am not sure what shipping is, but I'd sell the seat for $70 or trade for some 758a carb bodies if you got them. I will have to wait for the seat to totally dry before I package and get its weight, if you look closely at the photos you can see dark spots around the vinyl and stitching that is a slight amount of moisture from the washing that still needs to dry completely. The bike and and seat were all just pressure washed to get them as clean as possible.

Thank you for your effort, but I found a seat from another source.
M

how about the back rest
V

There is the style backrest that mounts to the rear luggage box, and another style that is attached to 1/2" round chrome tube that looks like it mounts to either side of the seat and can slide forward and backwards to fit the rider's comfort.