eatherton said:
Use an amen wrench in the bolt side. The lock but will come with it. Or at least mine did.
Click to expand...

The person before me used something wired and fused the metal of the bolt and the nut. The Allen was the only way I was able to get the thing off.

Thank you all for the help/suggestions.

mistermo said:
Punxsutawney Phil said 6 more weeks of winter. He forgot to say they wouldn't be all in a row!!!
Click to expand...

KingCoder said:
After pulling out my steel bar (The But Buster) I was able to break loose both sides and get the swingarm free


The person before me used something wired and fused the metal of the bolt and the nut. The Allen was the only way I was able to get the thing off.

Thank you all for the help/suggestions.
Click to expand...

Almost completely disassembled and ready to be restored! 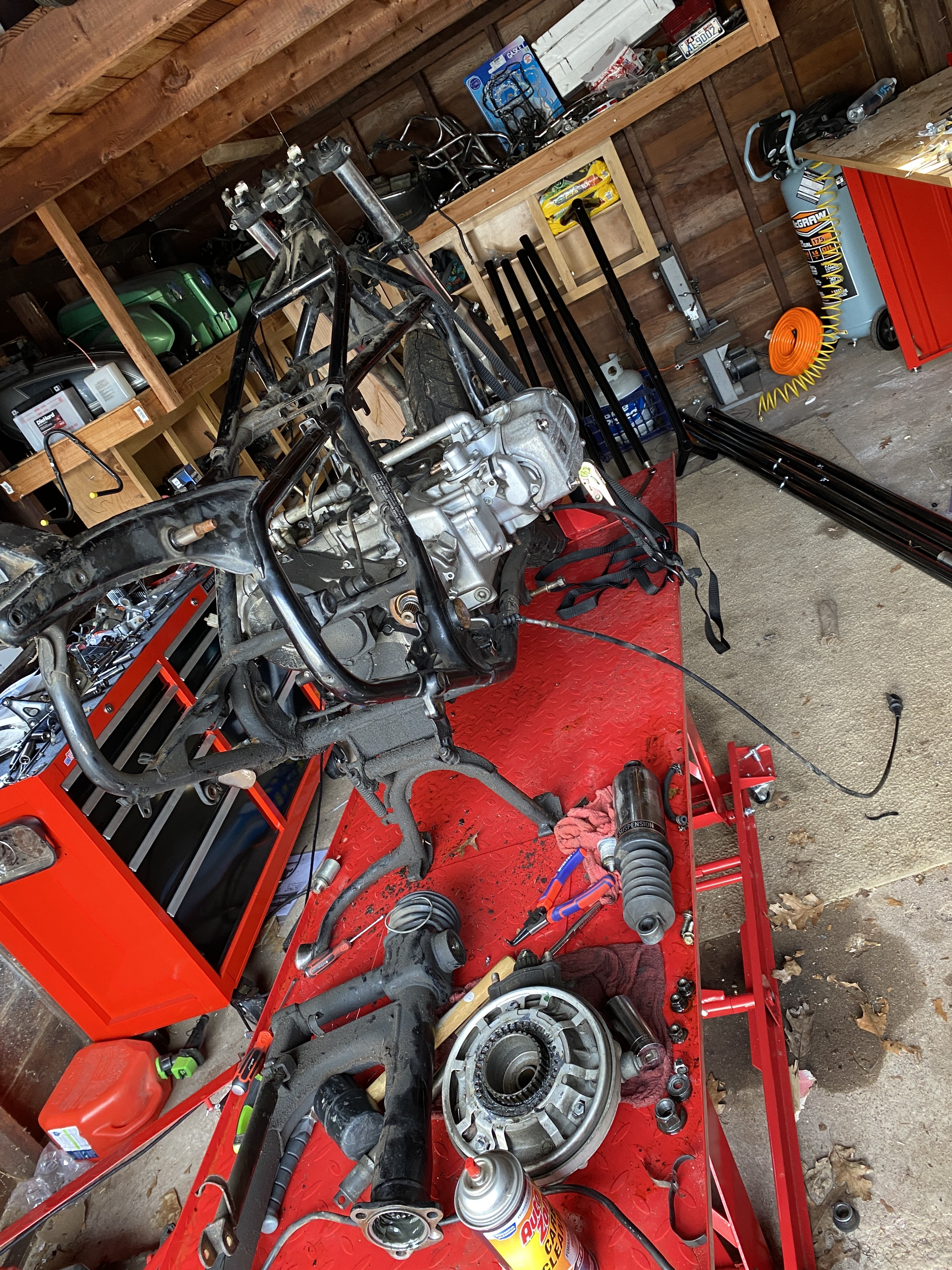 While you have the bike at this level, block the rear and check the underside of the centerstand for any bulging or rust. If the centerstand is perfectly straight, there might not be any issues. However, if you see any misshapen form, it is twisting and failing (common on the 1100's). 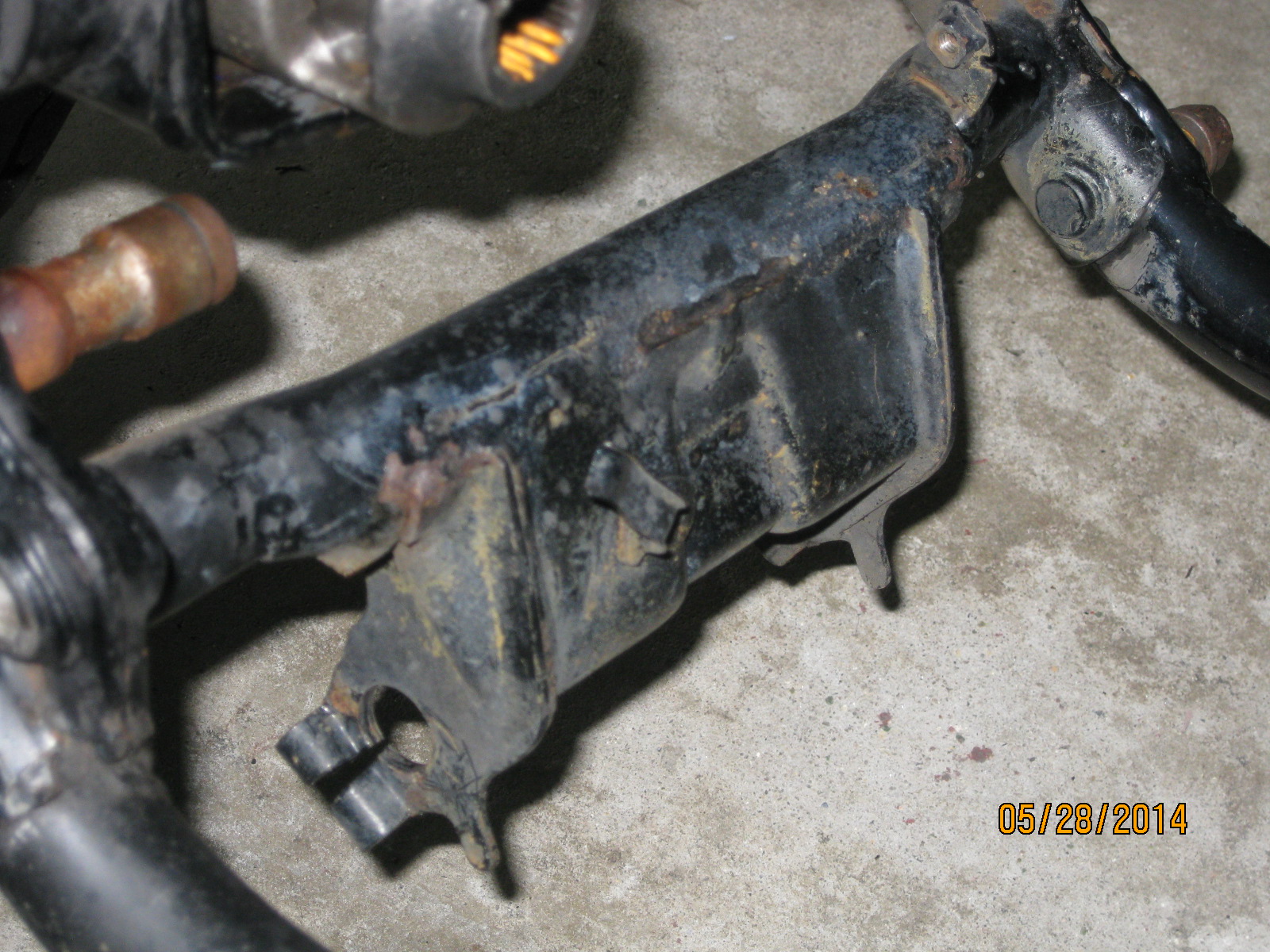 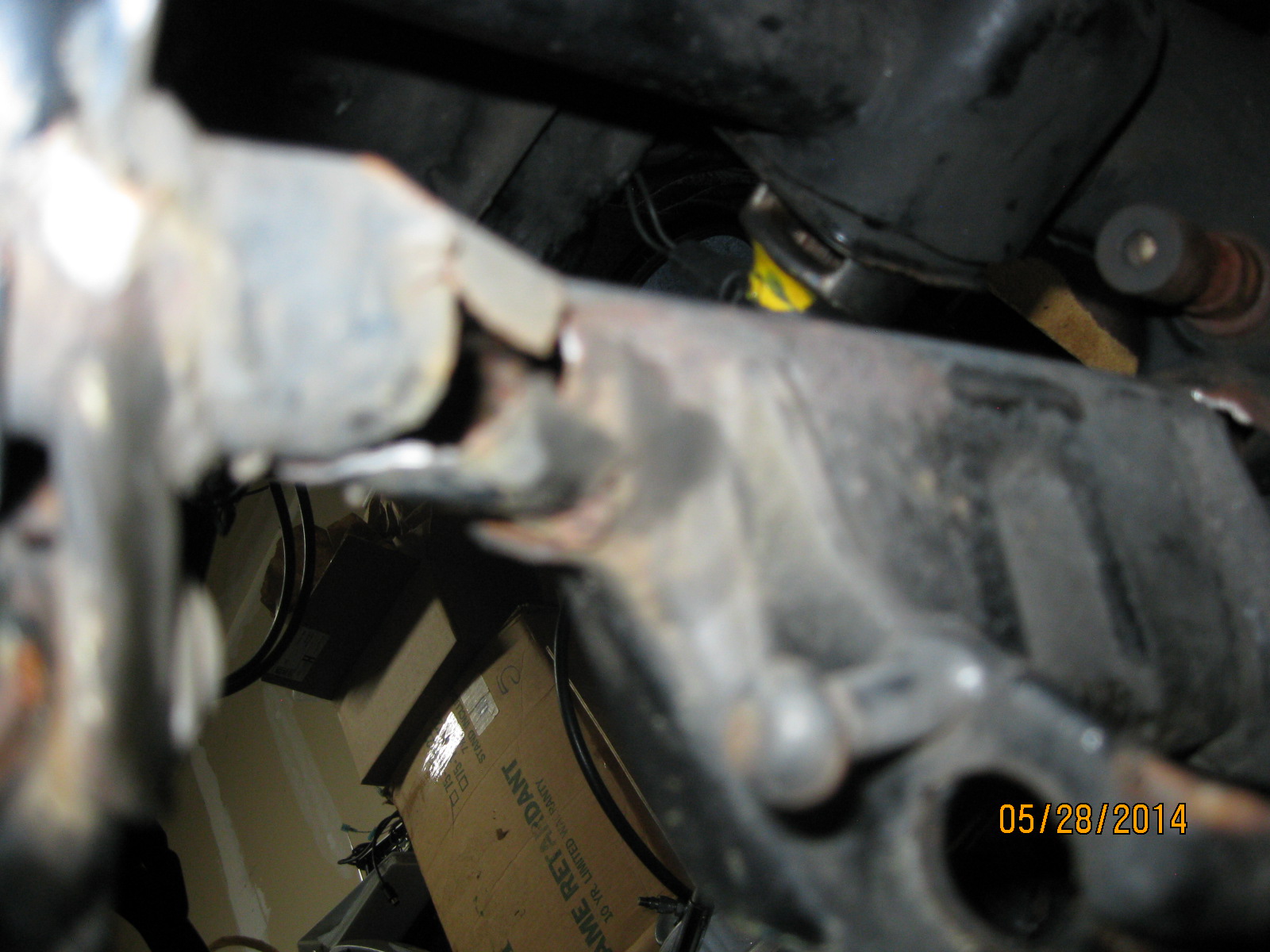 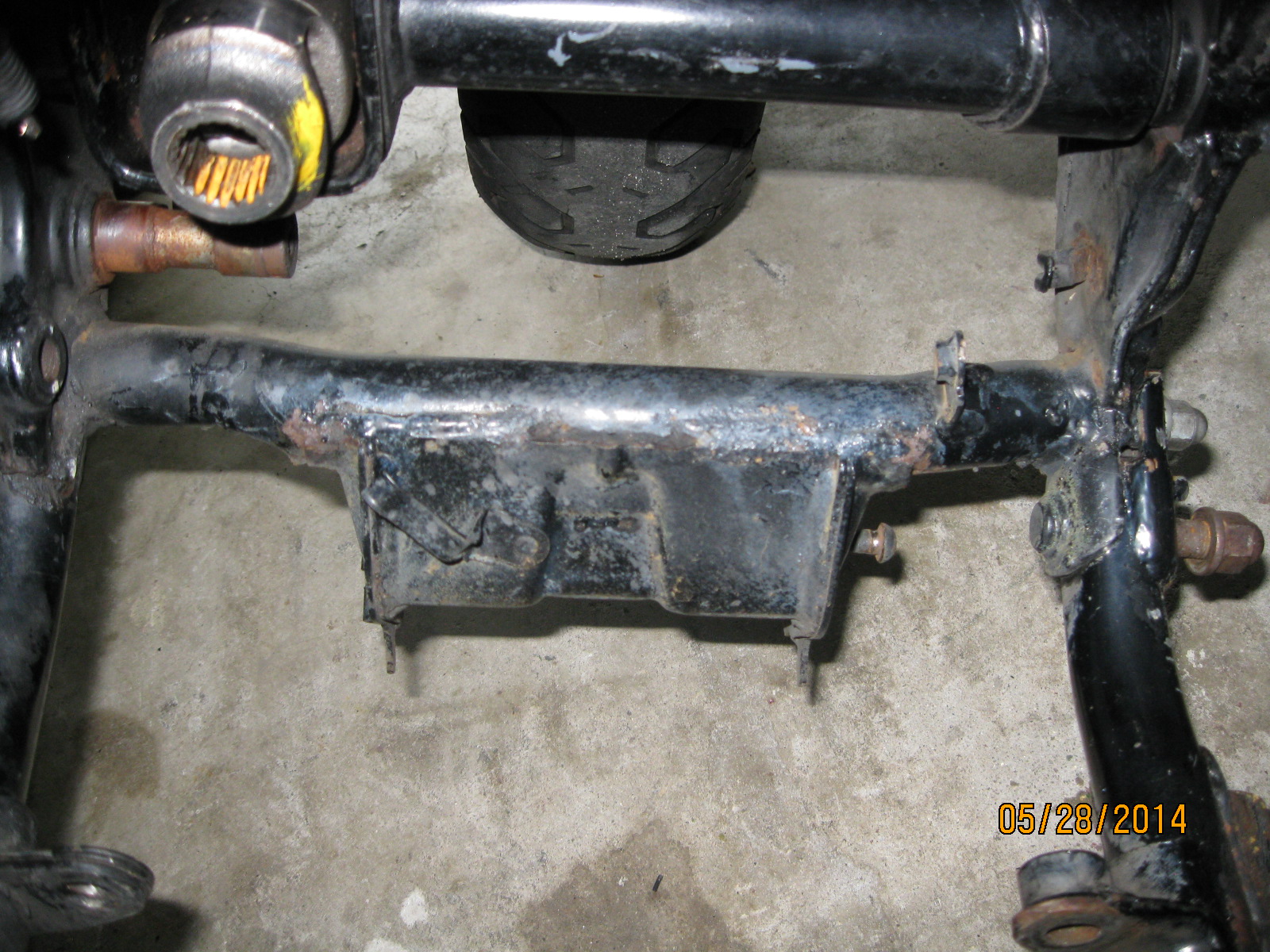 KingCoder said:
Almost completely disassembled and ready to be restored!
Click to expand...

Any updates on the restoration? I hope everything is going smoothly.
OP
OP

Freedom said:
Any updates on the restoration? I hope everything is going smoothly.
Click to expand...

Actually have made a ton of progress. The engine has been completely disassembled and is being cleaned at the moment. I have been trying to decide on what color I was my plastics and fake tank. (Have been thinking about purple).

i rebuilt all the brakes and the forks and will hopefully be reassembling it all in a few week. I will post some photos of it once I get it clean.

I do have some questions on where to find some things: air hoses / connectors for Aspencade shocks (should I use normal shocks), where do I find fork ears? Do I have to use crappy aftermarket ones?

Also wonder if I should paint my engine or polish the crap out of?
OP
OP 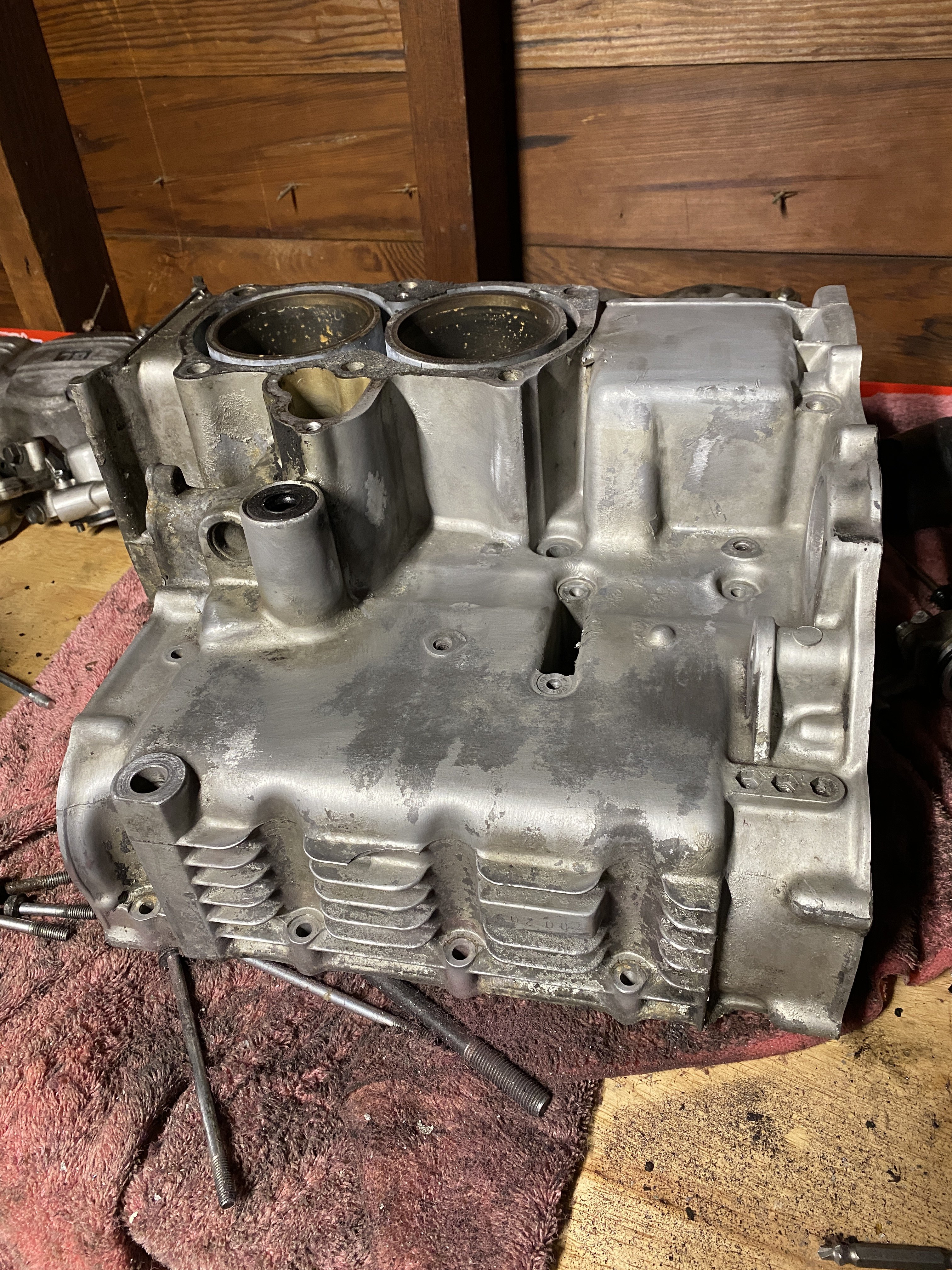 Giving the case a bit of a cleaning tonight. Starting to look nice. This was black a few hours ago

If it was me I'd paint the case. Lots of work there!
OP
OP

I am talking to a machine shop near me to see if they can clean it for me to paint. I honestly didn't know you could even paint them till I found this engine painted.

KingCoder said:
Hello everyone I am David.

I found this GL1100 in a barn and decided to give it life (I have heard the engine run so woohoo). I am disassembling it now and will be turning to you all to help me find the replacement parts I need. I have been using the forums for a few months now and finally decided to become a member; Took me till I began disassembling the bike to create an account.

I hope to someday get my girl (Matilda) on the road and riding free again!

Here is wishing you luck but you shouldn't need luck, you are working with a Goldwing!

Like the progress. I did my engine during the C-19 issue. Had everything vapour blasted. Did not paint, but used CERAKOTE MC5100 as a protectant on everything that I could. Cleans up with a damp rag. Specifically formulated for all aluminum finishes, including vapour blasted surfaces, but works just as well on painted surfaces - no affiliation, just like the product. This is an air cure product, no heat required. Can be brushed or sprayed on. It's a nasty product, wear a mask. Caveat - once applied nothing sticks to it unless you roughen the area up a bit. Company mentioned in an email that most of its MC products would work well.

To paint the engine just have to have media/sand blasting. If you vapour blast, won't be able to paint - surface too smooth for paint to adhere. Would have to rough up the surface defeating the purpose of vapour blasting.

If you are having problems sourcing new rings, 2002 Chevy Tracker 1.6 litre rings work a treat. Have these installed in my 1200. I got mine from Rockauto, but no piston rings show up on its web site for this engine anymore. These rings sets come in standard of 75mm, or 0.5mm over, and 1.0mm over. I used 1.0 mm over and adjusted the end gap to suit.

I used this ring set in my 1200 because when I had the machine shop hone the cylinders, check the con rods for straight, and install the new generic rings, the machinist mentioned he did not like the rings. His instinct(s) were spot on. First and subsequent starts, blue smoke every time. Took engine apart, fitted these new rings, made by Hastings, and smoke issue went away - happy camper I was after this. Compression all round at approximately 160ish.

Had an issue with the engine shifting after first time back together. Wouldn't shift out of first. Took engine apart, no issues. When I put it back together, made sure it shifted at every step, especially after joining the cases. Just a thought.

There are two support bearings inside the cases. One for the alternator shaft, and the other for the output shaft. Make sure these are in good shape. Mine were seized: 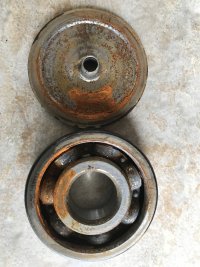 Easy to replace at this stage when you have the cases apart.

I used Honda Bond 4 for the mating surfaces, good stuff - no leaks: 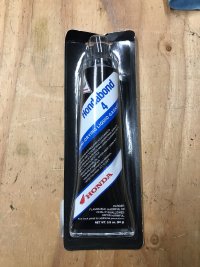 Followed the instructions in the OEM service manual ragarding the rear case - it recommends only doing a part of the gasket. Had an oil leak because of this. Took engine out, removed case and used Honda Bond 4 on the entire gasket surface, no leak.

Just a few thoughts for consideration.

Here's a thread from the NGW forum that may be of interest:

I will be done sandblasting soon and I will be using ceramic engine paint to coat it. I was able to find rings, I have been having issues finding crank/piston bearings. Any links where I might find those?

you might have other ideas for engine paint but a ringer for stock silver is called cast aluminum silver engine paint, I salute you brother, thats a big job but it looks like your determined and thats what it takes.

Try CMSNL out of the Netherlands. There's a fellow on this and the NGW forum who sourced bearings out of Germany. Goes by the handle Gc33.

Forgot to mention. When I painted my-ex 1500 and my long term retirement project - '85 GW, I made a lazy susan to put th eparts on for painting. Let me rotate the parts/pieces for ease of painting. Only $10.00 or so: 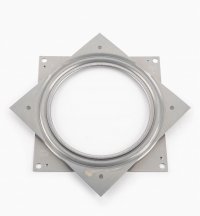 This picture shows the lower front cowling of the 1500 primed ready for paint on the lazy susan. Mad a jig to accommodate various pieces. Had a fan behind to keep the paint overspray in check. This lazy susan also supported the engine so I could spin it for work: 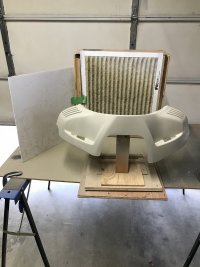 Slowly painting all the pieces. The frame has taken me over a month of sanding and I am still not done, might need to rethink how I am going about that. Also how do I go about protecting the bike info on the frame?

I ordered some bearings from CMSNL so thank you guys so much for the tip!

If all goes well I will finish the engine before September!