the Hunley, or pidjones needed a project - '78 frame with '75 engine

Glad things got fixed up ....this was obviously a severe flooding condition ...after getting into carbs as any oldwing owner has to or have plenty of money not to ....I became not a fan of the slide needle and seat system and even worse vacuumed slide operation and throttle plate sync adjusting ...as ultimately the throttle plate is never really closed ...so even at idle this carb was feeding gas from the worn seat and flooding everything ...no wonder the plug was fouling out. I’m at the belief that the needle and seat set up dam near nullify actual jetting in stock carbs as basically it is a jet with the biggest influence on things even when everything else in a carb can be perfect ...I also think needle and seat is the biggest reason stock carbs seem to have bad spot through the rpm ...years ago on my stock 79 I got the carbs working really good but it had its spot where it lacking ..though very slight it was always there

Glad the bike has had its bad part identified and changed ...I’m not sure the slight different part will ever be a issue ...I’d ride it a while as is and give it a chance to see how it does ...in my opinion

From that picture it's hard for me to tell if it's worn or just dirty. I must just not be looking at it right.
Anyway, glad you got it worked out.

Really hard to get a good photo of it. I don't have anything to measure it with. Would require a tapper gauge or such. It is certainly worn 20% bigger than original, and the needle had rings worn on it. All the others looked (and performed) fine, however.

An update; #2 received an emulsion tube and needle jet for '79 carbs. I know it's wrong, but the four replacement used jets were all worn, also. Bottom line, it no longer fouls #2 plug, starts right up, warms quickly, and responds well to the throttle.

I've also installed a Dyna S ignition that came with my '79. No drama there, it just works. Presently running the iridium plugs that came in my '79. And the '79 seems to like the standard plugs.

Now that I have the '79 for warm weather and the '78 rescue ("Johnny 5"), the Hunley will spend another year as primarily a bike for shows. Several updates coming for it: a better looking front master cylinder, LED digital voltmeter (done) and LED reflector replacements wired as both side markers and turn signals (done, except one needs a solder joint repair). I've also lowered the back of the seat so that the seat bumper rubbers now rest on the frame as they should, and it improved the look of the back of the bike.

Also considering replacing the fuel and temperature meters with digitals. Bar graph for fuelm not decided on display for temperature yet.

The Hunley really wants the plain polished aluminum front master cylinder that I bought off of ebay. But it turns out to be for 1" bars so it gets (until I turn up shims) a Chinabay master that still looks a ton better than the original '78 GL1000 with original reservoir all crazed and ugly and painted black because I couldn't stand looking at it anymore.

Pulled the Hunley out of hibernation today. Drained some coolant and changed the temperature sensor, installed a digital temperature readout on her. F scale, 104 - 300 range. 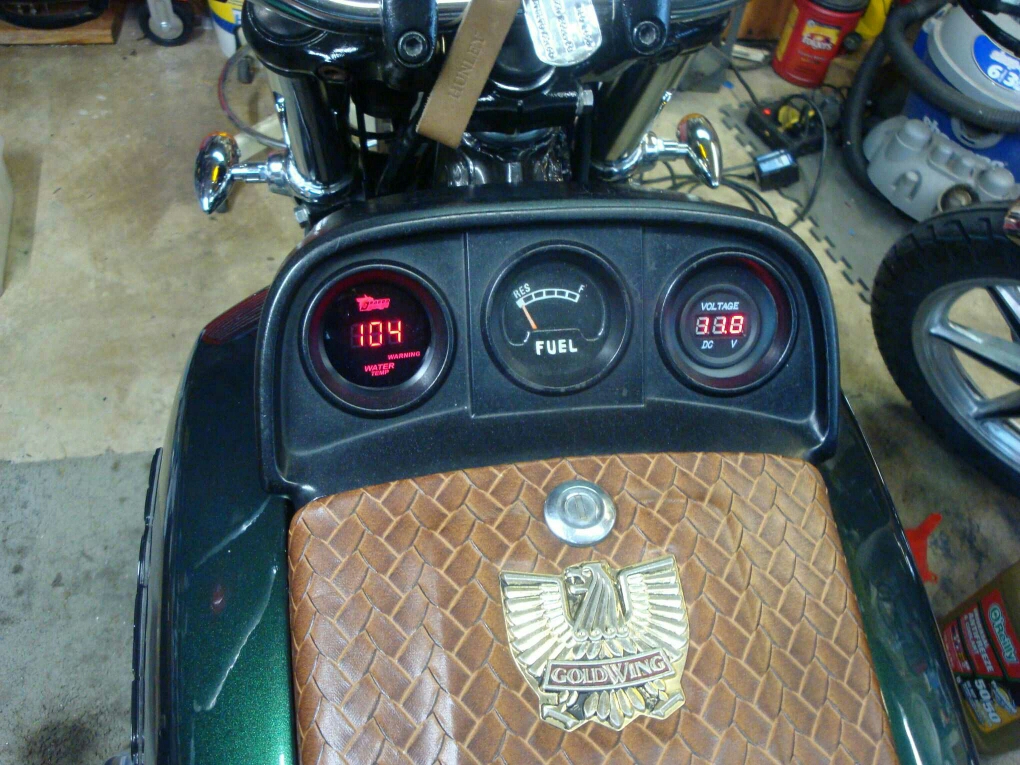 I'll be interested in the figures that may registers.while operating nice

Well, I just got finished starting her (after setting all winter), ,warming her up some, and shutting her down to change oil and filter. Don't know how accurate it is, but the temperature climbed to 201 then fell rapidly to 180. Probably thermostat opening point and the rush of cooler water from the radiator kept it down for a bit. I didn't wait until the fan came on as I didn't want the oil too hot when I drained it. I'll report back again some time next week when I can actually ride it.

BTW, if anyone ever decides to use those pretty chrome spin-on oil filters, take the darn center piece out and screw it into the block as far as it will go, then spin the filter onto it. If you don't, the center adapter will stop threading in too soon, and the filter will thread on until it hits a short non-threaded part and just spin. I don't particularly like the filters, but have been questioned at shows why it doesn't have more chrome, and I won these so....

Pulled her out for a quick ride before a show and the starter solenoid stuck ON. Had to pull the battery cable to stop it all. Ordered a new solenoid, but wanted to take her to the show (trailered, so I could take chairs and such). So, I pulled the solenoid, carefully bent the three crimps out and pulled it apart. All rusted up inside. Broke the coil leads disassembling, too. After cleaning it all up, soldered an extension on one lead and reassembled it. Reinstalled without the auxiliary fuse and connections that I wasn't using (they are in my harness). Works great! Starter survived, so took her to the show and had a great time.

How did this solenoid fail so fast? It is in an unsealed can, closed on the bottom. Any water that gets on top of it is free to drain into it and rust up the works. Add to that the occasions that I have trailered her (side covers removed to prevent straps from rubbing them) through semi-monsoons.

When the new one comes in, I will be finding a way to either seal the top, or extend the + battery cable and mount it inverted.

Nice rigging it up

Temperature update for Joe (and any other interested); seems to run ~210-220 after about 20 miles on warmish day (~85F). Peaks to a little over 230 on climbing a hill but drops back going down it. No belching from the overflow tank which is now filled with Zerex Japanese car coolant. My IR can't find anything over 200, but it's hard to get it back in there. Wish I had tested this meter/sensor in boiling water before install. Might be reading high, but then in a pressurized system I am no where near boiling temperature. Expansion tank cycles in level like it is supposed to.

Fan is cycling normally (now) after clearing the corrosion from the brush springs and loosening/lubricating it all up, it runs nice.

Anyone else running a digital temp gauge mounted in the stock position?

And the boiling point of water is well over this in a 10-13 psi system.

A couple Hunley updates. Started her up three days ago to make sure she was ready for taking to the Time Warp bike night - fired right up. Later, I rolled her out again getting ready to go and just got a click click from the solenoid and the voltage didn't wiggle. Rolled her back in and took the Spyder instead. Yesterday I swapped solenoids BACK to the old (still a Chinabay) one that I had cleaned up. Fired right up. Rode her this morning into town and gassed up (still a gas hog) then rode home trouble-free. So, I'll take this solenoid apart and see what its issue is (probably crappy contacts).

The other report is on the digital temperature gauge. It is pretty random at higher temps. When I got home, it was bouncing from 220 to 238 F. I'm not so concerned with the bouncing around as the water flow at that point is being throttled by the thermostat. I left her idling and grabbed my two IR thermometers. I could find no point on the thermostat housing, water pipes, radiator, radiator hoses, heads or block that read higher than 202 F (and that was in ONE spot) most read 160-180 F. Header pipes read ~520 F. I've tried to press the connector onto the sensor better. Will check it again when the weather cools some. Hunley doesn't overheat, but I do!

Part of the reason I am not a big fan of digital temp gauges. A calibrated mechanical gauge seems to always work!

Ya'll in Tennessee check your local bike shop early January for Thunder Road magazine. You might recognize one of the bikes on the cover.