I had my new to me 1500 for about 1 month now and one of the issues it has is that there was an area in the instrument cluster that has got too hot and has melted. I started a thread about this and it appears it is the result of sun damage and a non-OEM windshield. I now believe it was sun damage and I'll show why later in this post. Below is a picture of the damage: 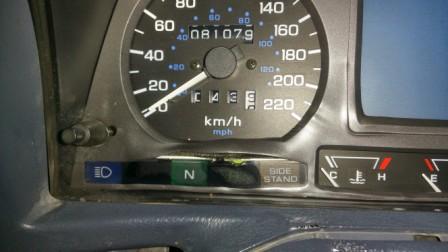 In order to fix this I found the Honda part # for the dash background piece. I went to my local Honda dealer and the part # seemed to be good. It was on back order but it came in after a couple of weeks. I was surprised that the part was even available and it only cost $40. When I received the part I realised there was a problem. It was the dash layout for an Interstate, not an SE. I had them double check the part # and I was using the correct # for an SE however we were thinking they probably only have a few of these left and you take what you can get. After looking at it further I figured I could make the Interstate over to and SE layout. Here is a picture of the new part: 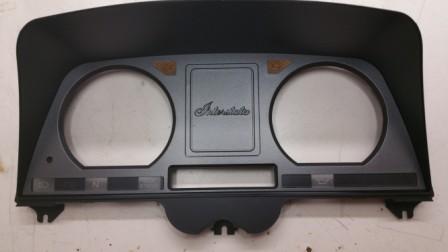 I found that the Interstate plastic piece pressed out leaving the same opening as was the SE dash. This is for the LCD screen. I also noted that the Interstate had no lights for low fuel, cruise on and cruise set. Since my old dash had not damage in that area I was able to pop out the plastic piece that contains the symbols and install it in the new piece. The new piece was also missing the hole for the clock adjust. The new piece had a mark for there the hole needed to be so it was a simple job to drill the hole. Couple more pictures. 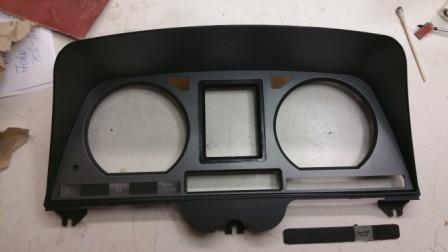 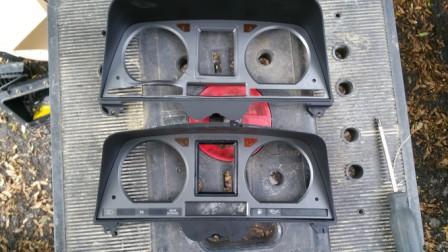 Getting to the dash cluster is straight forward and there are lots of good guides for how to do this. The best hint I got was for removing the dash vents. Some suggest using a paper clip to get to the tabs however someone mentioned removing the front signal lights which allows you to come in from behind and get the vents out. That's how I did it and it worked fine. There is only one screw holding the signal light housing in so it to me seemed like the way to go. Here is a picture of the dash apart: 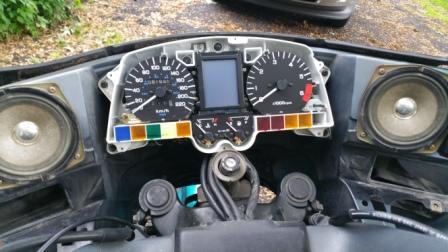 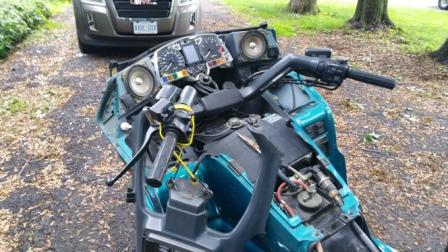 As for proof that this was sun damage note the colored plastic pieces when the dash panel is removed. Some had suggested that the damage I had was as a result bulb overheating and melting the area. I think this picture pretty much proves that that did not happen in because those pieces of coloured plastic would have been melted too and they were not damaged at all. To me it looks like the damage was as a result of the sun getting focused on a spot on the dark dash panel.

And finally here are a couple of pictures of the dash as it went back together: 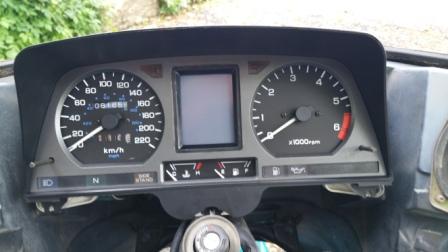 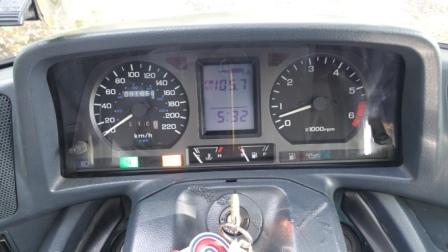 So it took about 3.5 hours to do and I think it looks pretty good. I found the parts easy to remove and put back together, you just have to take your time. If any one has any questions about this let me know and if you have similar damage it's good to know that the part is still available at a reasonable cost.
Thanks.

Great job!! Thanks for the write up with pics! :clapping:
D

Thanks for all the comments. Here is another question.

sheesh i dont know this answer ...

I don't understand how this is supposed to work either yet. I took the garnish off(just out of curiosity) when I did my speakers and some of the windshield screws were tight and some loose. I tried to tighten a couple but wasn't satisfied with my results. I'll dig into my owner's manual kept in the left bag and try to glean how this stuff works.

Was never impressed with this (FEATURE?). Mine was changed to a Tulsa early on, thicker & stays where you put it. The stocker always slid down, so a piece of rubber was used on each side by MANY to hold it where you put it. Back in 91 when mine was bought new, this was an issue with a lot of people in one of the wing mags.
B

The one that was made for my Tulsa is a light baby blue.

[url=https://classicgoldwings.com/forum/viewtopic.php?p=151981#p151981:10h9rdfy said:
Bigguy49 » June 27th, 2015, 9:20 pm[/url]":10h9rdfy]
That kind of damage is frequently seen with Tulsa windshields down here in Texas that is why you see windshield covers used on many of our bikes dosent have to be fancy even a old rally t-shirt pulled down over the windshield will do the trick
Click to expand...

Is that something that is specific to Tulsa shield or is it a GL1500 thing? I've never done anything like that on mine, hence the question.

I've only heard about regarding Tulsa's. If I had another bike with a windshield I'd make a fleece cover for that one too, just to protect against anything.
B

Hi julimike54. I ride with a chapter here in Texas and it was noticed by several members that the sun was causing damage mostly from the Tulsa windshield due to its curve and maybe the extended height ,I enjoy my Tulsa and would not change a thing I just have a couple of covers that I rotate through and a spare plain white one always on the bike just in case

Seems to be like a magnifying glass, focussing the sun's rays, :headscratch: know it has this issue now. :yes: Find a spot in the shade when i stop & have to park, & since i don't park to work anymore, never parked long enough anywhere to be an issue. :hihihi: Otherwise the Tulsa is a great modification sheds water like a duck, & quiets the wind noise to a whisper. Mine on my 1500, has way over 100,000 on it, still in good shape, the one on the 87 has over 60,000, same thing. :moped:
Share:
Facebook Twitter Reddit Pinterest Tumblr WhatsApp Email Share Link