I wouldn't think this would change anything in my opinion

Adjusting the hydraulic lifter shims probably won't change anything regarding engine cylinder compression, but it should get rid of that annoying faint ticking sound. If there is a change it should be because of the new rings I intend to install. Not a lot of wiggle room in ring end gap - max of 0.6 mm. This engine is a definite test of my resolve. Cheers

More done today. Engine apart, pistons out. Measured the new rings in the cylinder, definitely 1.0 mm oversize. have some fitting to do. OEM piston rings are 1.15 mm thick, new rings are as well. Only broke one small bolt, my bad, drill turning wrong way. Have it out in a couple of days. Have a rear cover gasket to make.

Checked the ring gap of the rings I am replacing, almost at the 0.6mm max ring gap.

The new rings are definitely better. The rings have lettering orienting them right way up. The first ring is square cut, the second ring is beveled, bevel side down, then the oil ring.

Hmmmm I'll be watching this Ernest ...

Decided to get one of those inexpensive ring gap tools. Can spend a lot of time sanding the ring ends. Here's pic: 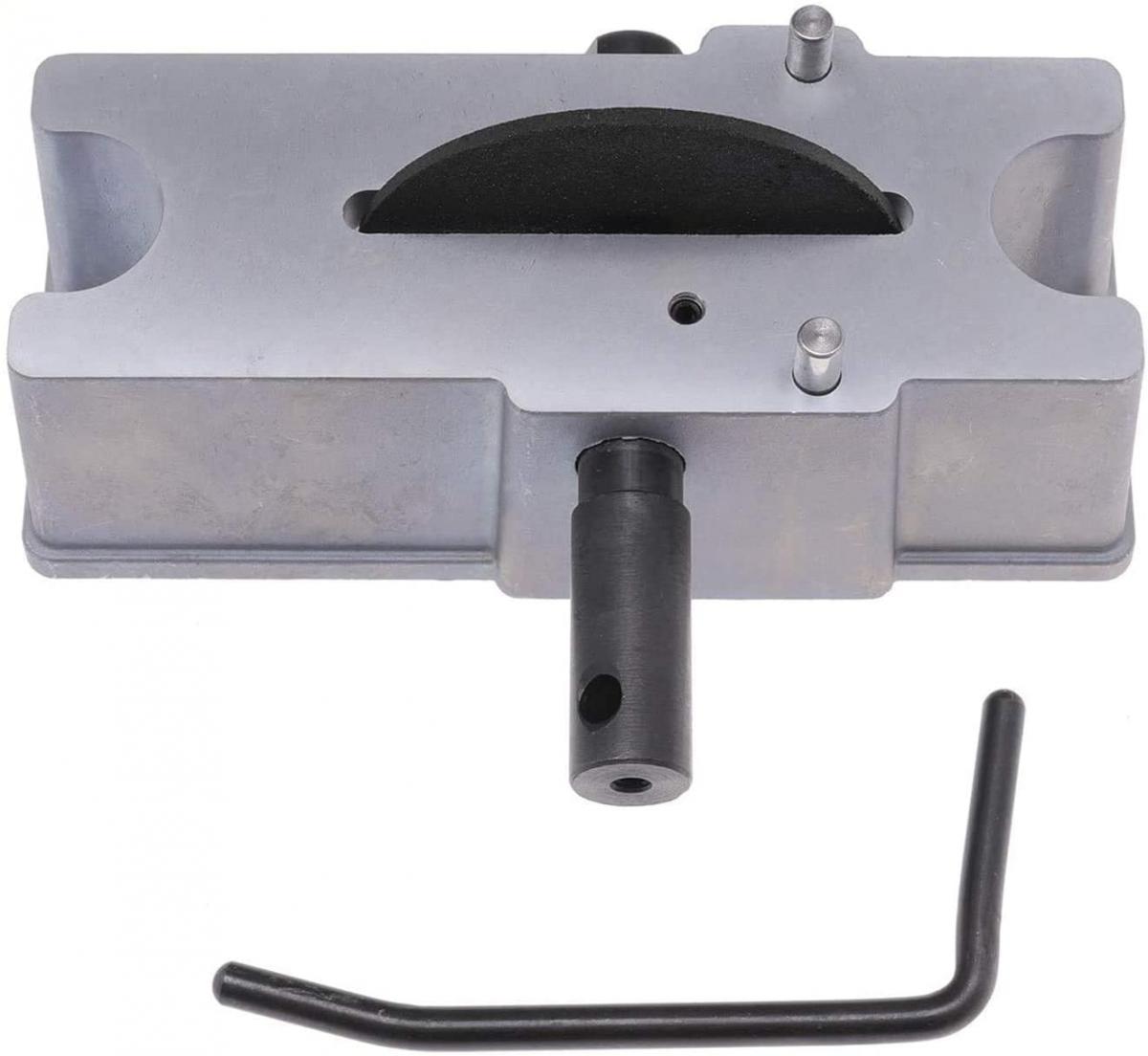 Looks handy and looks to work by hand power ?

Will know tomorrow, supposed to be delivered. Have also taken some cylinder bore readings fore/aft, and side to side of numbers 2 and 4 cylinders. Came in at 75.48 to 75.54 in the middle. Using an inexpensive set of inside calipers: 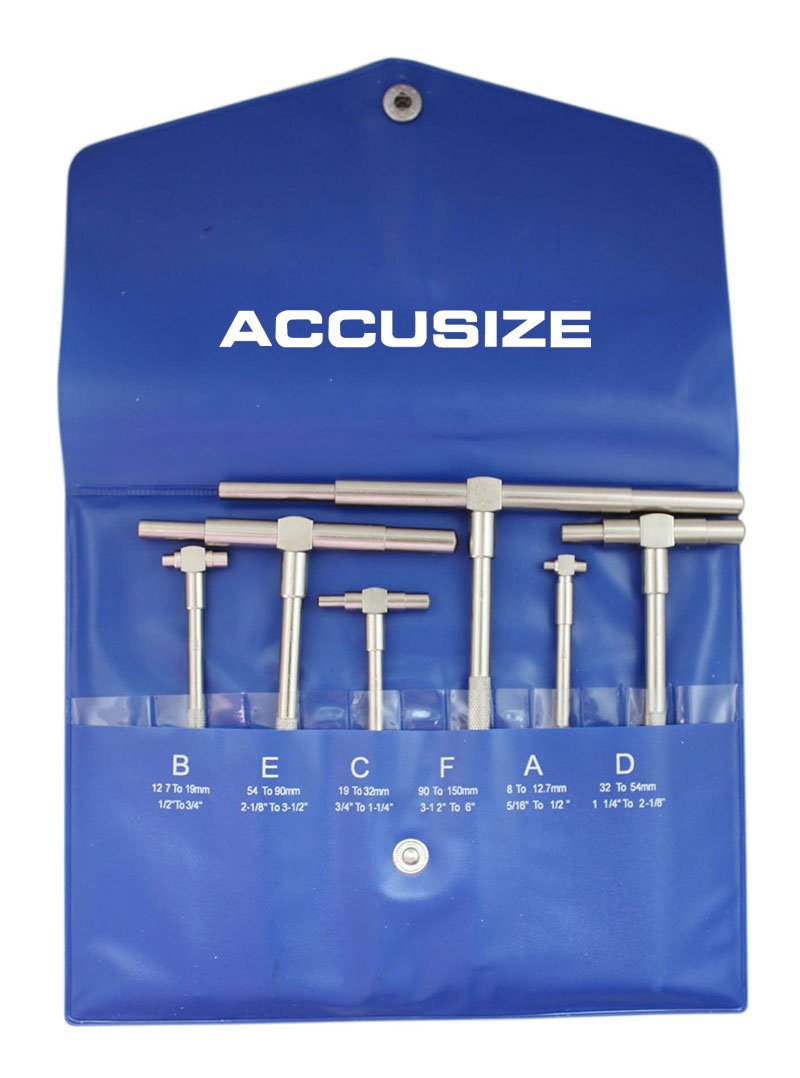 Once you measure have to use Vernier calipers to get measurement. Close enough for my work.

Checked all cylinders with the inside calipers. All came in at 75.4 or 75.5 mm give or take a decimal point - good enough for me. Cleaned all the old gasket material off the parts. Spent an inordinate amount of time on the cylinder heads and block for the mating surfaces. To me, this is most important and shouldn't have to use an aftermarket product to seal the head gasket(s). Try to get these surfaces as close to that nice clean shine after having the surfaces machined.

Will be starting the ring fit tomorrow. Aiming for 0.4 mm ring gap on the top and middle rings, and 0.9ish mm on the oil rings. Will be using my new acquisition to do ring gaps.

Cleaned the engine and other parts. I had used CERAKOTE as a protectant when I did the initial rebuild. Used glass cleaner and a rag to clean these parts, grime wiped off easily.

More work done today. Got the ring gaps done for each cylinder. Connected a drill to the ring gap tool: 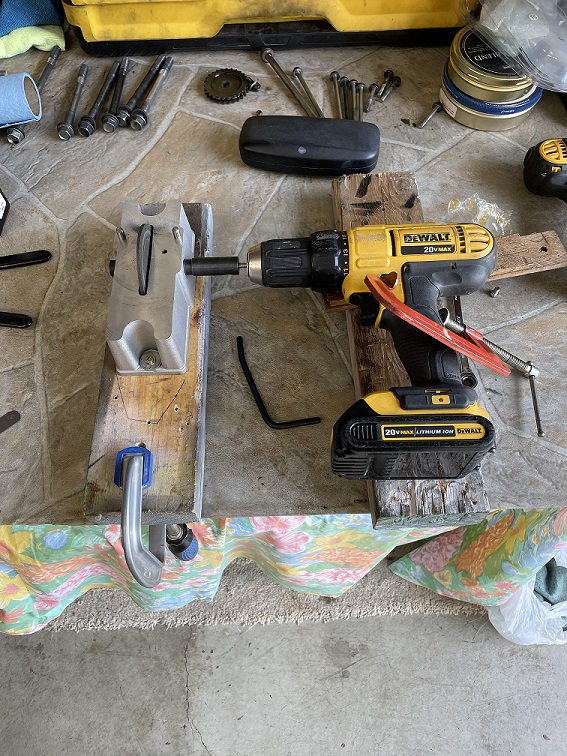 Worked a treat, used a C-clamp to hold the trigger at the speed I wanted. Kept the timeline in check, easier and quicker. Have 1 and 3 pistons in and torqued.

Two oops today, had one connecting rod bolt start to stretch, replaced with an older one - all good, and had one ring break - have another set on order. This engine is fighting me every step of the way. I will win.

Should be good to go by next weekend.

Was going to go less on the top and centre rings - 0.43 mm, but I remember an incident my Father had back in the late '60s when he decided that for the next stock car year he was going to build the quintessential engine. He got special pistons, rings, camshaft, everything he could think of. Put it together and melted the pistons - machine shop did not bore to the correct size. Decided on opening it up a bit to 0.58 mm - service limit is 0.6 mm.

Ring set has been shipped from Rock Auto. Estimate next Tuesday. Will give me some time to make a rear cover gasket and do some electrical wiring for the new lights going over the kitchen island. Have to work in the attic - bit warm, so mornings it will be.

Ring set arrived two days ago. Will be gapping the new ring(s) to fit, and then put the engine cases together. Have ordered a sheet of gasket material 1/32" thick to make a rear cover gasket. Will have enough for a second if needed. May make a water pump cover gasket as well, keep the Honda gasket for a template.

I replaced the FD with one from a 1500. Thinking now might be a good time to clean, paint and CERAKOTE it. Would use spray can for primer, colour then brush on the CERAKOTE as a protectant. Have a couple of days to get this done.

Good job there Ernest;
Reading through this thread, reminds me that the last time I had to use a Ring Gap tool was back when my dad and I overhauled a '49 Plymouth and I was still a coat hanger running around under his feet.
He made sure that I got involved in everything he did, which is how I came to be one of those guys who fixes everything at home that can be done without expensive special tools.

These older motorcycles do require you to be a jack of all trades, master of none. If you can become one of these fellows, almost anything can be achieved.

The ring gap tool worked well with the drill attached. It's interesting to do the ring gap, pushing the rings into the cylinders, getting very close to what you want, and then install. The rings I used from a 2000 Chevy Tracker are definitely better quality than the generic ones I had previously installed. If we think back to the older days when we needed to be inventive, and used a lot of different car parts that fit and did the job quite nicely, these older motorcycles aren't really without parts.

Case in point, used to go to the "jobber" in Barrie, take the part in and look through a number of books for a suitable part. The unfortunate issue is that finding a parts book with the specs for the part is getting damned near impossible. Manufacturers are keeping this data close to the chest.

Used the Honda ring compressors on install, so much easier than using a DIY tool, especially when joining the cases. I previously mentioned that I had ordered a ring compressor, then ordered another that came as a set, now have three. Going to put the third on the forum for a new home. The piston support came in the day after I put the case together. Made two piston supports, but was going to use the one I ordered as a template for a second one.

I have a spare engine in Ontario that I will be bringing back with me after I visit my family this fall that may require a look see and minor rebuild. Always good to have a spare kicking about.

Working on the engine piece meal as I am finishing some of the kitchen reno such as installing new lights, new backsplash - takes time to get it oriented and on so the tiles look symmetrical. Have sister coming to visit so a BBQ in her honour is forthcoming as well. So much to do and not enough time, always the way.

Kitchen reno winding down, finished the tile and grout, have to do a small bead of silicone between the counter top and the backsplash, then done.

Took some time to get back to the 1200 engine. Started assembling the engine, torqued the engine cases, installed the rear cover - had to make a gasket. Checked the shifting up/down to make sure that I would not have to take the engine apart like last time - all is good. Will progress it over the weekend, and maybe, just maybe, have it installed and operating by end next week. Looking forward to ascertain how the engine is going to work with the new rings I installed.

Never know what is going to crop up.

I’m curious too how the rings do.
Keep up the great work!
S

dan filipi said:
I’m curious too how the rings do.
Keep up the great work!
Click to expand...

If all works well would love to see a list of all the parts and sources etc.. Never know when it may come in handy!

These engines seem to be very well made.

The crank and con rod bearings were the not easy to source, especially if these were not the middle of the road size. GC33 has information on bearing suppliers and where you can get piston rings, or piston and ring sets from Germany. I think I have listed this in a previous post.

Most internal bearings can be found aftermarket.

Had to make a rear cover gasket, Honda apparently has discontinued these.

Transmission/water pump cover gasket is still available. Thinking I'll order one for a spare, and probably use as a template for later on.

I used CMS in the Netherlands for parts.

Had the cylinders honed, finished product was good. Machine shop did not recommend anything further. I took cylinder measurements after the fact and all within spec.

Taking these engines apart is more intimidating then difficult. Not much to these. It's the external optics that are scary. If you can remove the engine to do the heads, and/or water pump, and/or having to remove the rear cover, not a lot of work left to separate the engine cases.

The only way to identify what the crank and con rod bearing sizes are is to separate the engine cases.

Good work day. Engine parts go on quicker than coming off, and it looks like I have accomplished something.

Have to start looking for a 1" spacer for the external alt crank pulley. Be prepping the frame and such for engine install in the next couple of days. Still considering painting the final drive.

Good job there Ernest,
I like hearing there are optional sources for keeping our old friends on the road.

Thanks. There are always options, just how much time and effort does one want to use in order to keep an older motorcycle, or other vehicle on the road. There will come a time when I will probably say enough is enough, but not yet.

Another good day. Family lunch gathering. Sonya's brother has his three kids in town, spouses and the grandkids. Been the first time in a while. Played a round robin tournament called BOLO, a ladder ball game. Lots of fun and very competitive.

Was going to paint the FD and have it prepped, but have decided not to. It's clean, ready for painting but have not got the epoxy primer or the silver paint. Since no one but I will see the FD, going to brush on a coat of CERAKOTE as a protectorant and for ease of cleaning - tomorrow's project amongst other things.