Hope I got the subject correct. Out yesterday for a trip to a local coffee shop for coffee and coconut cream pie. Felt a miss when on the highway, then when I hit town, the bike started to miss and lose power and eventually quit. No error codes on the ECU. Let it sit for a bit. Had a few people come by to assist with a push into the parking lot if needed - very nice to see. After about 20 minutes, started, idled well and I continued to the coffee shop. Had the coconut cream pie - moral imperative.

Went to come home, bike started right up. About a Km down the road, started to miss, then quit. Pulled into a parking lot, started then quit. Did this a few times. Called the local towing and while waiting I started the bike and let it idle for some 40 minutes, all was well. Didn't tempt the fates so bike was trailered to the house. Started and drove into the garage.

The bike idled well, but since it was not under load, expect that whatever was wrong did not get hot enough to fail.

Checked fuel pressure and was in spec. Thinking it's the coils. Will start and let warm up today then take around the block. Hopefully it will duplicate what happened yesterday. Coils are 34 years old.

Last year when I was having the electrical issue that resulted in my changed back to the OEM coils and wires, I noticed that the engine temp would be hotter than normal, and would get to operating temp and to the temp where the rad fan would come on quicker. I noticed this in the last week. Seems these engines are sensitive to a weak or lack of spark to a plug.

Will replace the plug wires first, have the wire. New boots, wires and coils cannot hurt.

Since there were no error codes, do not expect the sensors to be out of spec.

Ns sensor was replaced last year and should be good. TPS was as well.

Checked the Gr/Gl sensors as well last year, in spec.

Will recheck the sensors, but still leaning towards the coils.

I have read this happening with faulty ignition pickups. Also if the gas cap isn’t venting.

Will check the gas cap. These '85 LTD were known to get vapour locked, Honda fixed it on the '86 SEi. There was a mod but have not found it - the vapour lock was because of heat.

Going to check the sensors, but without an error code, ECU is getting what it needs. Always a challenge and adventure.

Hmmmm there are so many things that can cause this ...hunting it down can drive you dang near crazy ....the hooch bike first name was the exercise bike ...it would leave running and come home being towed or pushed lol

I have an older Chev truck with a "Rotten Chester" 4brl that has the in carb filter, at idle it would run until the tank went dry, but under load it would starve for fuel and feel like it had a miss and then die, turns out that little filter was mostly clogged.

Keep an eye on system voltage as low voltage will cause running issues with efi. I also agree with potential pickup coil faults as Dan said. Good Luck. :yes:

Bad gas, or water in the gas?

All good things to check. Did you run it in the dark to see if there were any stray parks?

Tomorrow is going to be the work/investigation day. So far fuel is at the top of the list as commented on here and on another forum.

Fuel cap venting quite important on an FI so will verify. Check the inlet filter to the fuel pump to determine the state of the lines/tank - did clean the tank last year, but have not replaced the fuel lines with these only being probably 33 years old.

Will still be looking at new plug boots, wires and coils if not because of this because after 33 years could do with a refresh. Did talk to a supplier in Langley just across the water near Vancouver and the Accel coils with wires are $249.00 CDN, best price I have found. Pug boots are approximately $9.00 CDN. Nothin glasts forever.

Out having breakfast on the bike. Don't know if I have the issue in hand. Soaked the gas cap in WD40 degreaser overnight (biodegradable stuff).

Compressed air through the gas cap, confirmed lots of spring tension left as well.
Cleaned the fuel pump inlet filter/screen. Not enough to keep the engine from operating, but did get some fibres out of the screen, indicates fuel lines are breaking down - time to change. Will wait until second bike is here.
New fuel filter - blew through the old one, no issues - better safe then sorry, good for another two years.

Just need a good ride to confirm the system is working properly, if not onto the next possibility.

Last update. Did a 20 Km run first thing after doing the above maintenance. No issues with the engine misfire or dying so to speak. Remembered I have this nice ultrasonic cleaning machine, so I returned to the garage and used the ultrasonic on the gas cap, cleaned it up nicely. Put another 20 Kms on the bike at highway speeds and no issues.

Thanks to all for steering me towards a fuel issue. Could have gone down the rabbit hole as well. Still intend to upgrade the coils, wires and plug boots, but that can now wait for another day. First will be the fuel lines.

Hear you on that. Talked with my brother up north in Larder lake, Timmins area. He mentioned they got dumped on some 10 inches or so.

Out this morning for a ride and coffee with some friends. Outside registering 0 deg C. Heated liner and bike will travel.

Was out on the bike this morning at 0530 and 0 deg C - heated liner on and working well. Bike is operating very well. The little stumble I used to get when accelerating on an on ramp or when I was accelerating in the lower gears is gone now. Very aware of how it has been running.

Got to thinking about my engine issues last June/July where I spent quite a few hours trying to fix the misfire/stumble issue up to 3000 RPM. My final solution back then was to reinstall the original coils and wires in place of the new coils and wires that I had installed. My thread on this issue is: viewtopic.php?f=24&t=12233 I mention above that I had a little stumble when accelerating, and this has been there since I went back to the original coils/wires.

Now that I have had this issue present itself, I'm now curious as to whether the real issue was a venting issue back then as well. I have taken the coils I bought and have done a coil check and the coils are extremely close to spec as per the OEM service manual. When I get the second bike out here I'm thinking I will install the new coils, wires and new plug boots as well to test my theory.

Time for a new thread on this issue.

Mentioned in post #14 that I would be investigating further the issue(s) I had last year regarding the engine missing when I installed new coils and wires. Got to do this maintenance, and install of new parts the last couple of days. After some 33 years, the plug wires are harder than the hubs of hell, and new plug boots are good maintenance. If this were a vintage car, the sentiment would be what took you so long.

Maintenance is to replace the coils with the new ones I purchased last year, new copper core wires and plug boots. Kept the OEM coils because these were closer to spec than the new coils - go figure. Replaced the wires, and boots. There are two sizes of plug boots - XD05FP and XB05FP. The LTD uses the XD05FP. The difference is the size, the XB is for larger applications. My parts guy had to look up the difference.

Got the work done, did a road test and the bike missed, chugged, whatever adjectives you would like to use and died, but would start again. Got me to thinking of last year when I had my issues. The only common theme/part was the copper core wires.

Had three options. One - install old wires again, the ones that are harder than the hubs of hell. Two - remove copper core and install the Beldon metallic 7 mm wire. Three - order new from Honda at $25.00 CDN each.

Went with number two, option one would be last resort and didn't want to pay mother Honda. Took the bike apart and replaced with the Beldon metallic 7 mm wire. Did road test, and all is well. The '85 LTD does not like copper core, why - don't know. Will be checking resistance today. The OEM original plug wires are also steel core - expect it to be SS wire core because of the colour of the wire, not copper.

Getting good at doing the work on these bikes. First go round took me almost two days. This last change of plug wires staring with the bike fully back together took just over three hours to road test, still have the shelter and seat to put back on but that is fairly quick. Always a treat when doing maintenance on these older bikes.

Very much so. Have been researching the issue of copper versus steel on the web, nothing definitive yet.

What little I could find about the Belden wires is that they are called "tinned metallic"'. I've found no definition of the term, but one site (not referring to Belden) stated that "tinned metallic" is tinned copper. So what is it that difference mean for what you purchased? In searching the what's in the middle, apparently some makers treat it as a trade secret (name 'Mag Core'). AC Delco calls theirs 'Fiberglass Reinforced Latex Graphite', others are just copper. Wonder what Honda OEM is?

as a ps, I looked up the hot rod standard (at least what we used to use). MSD wires, their core is called "Ferro-Magnetic Impregnated Core" and in the description it's called a copper alloy wound around the core. They claim super low resistance.

I guess everyone is different.

Done a bit more investigating. The OEM, Beldon and the copper core wires all had the same continuity. So went further. Looked at the core itself. They all appear to be tinned copper; however when I tried scraping off the tinning, it did not remove very well but a copper sheen seemed to appear. So I accept this.

Here are some pictures of each: 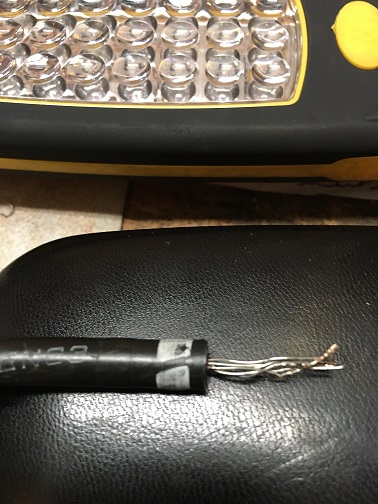 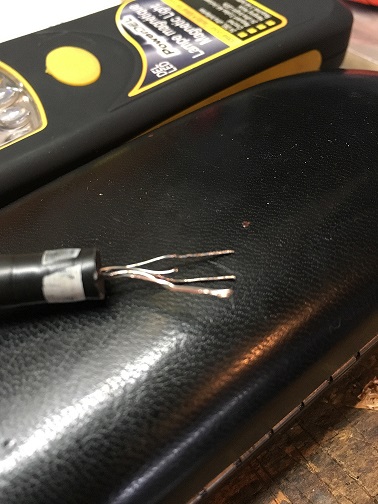 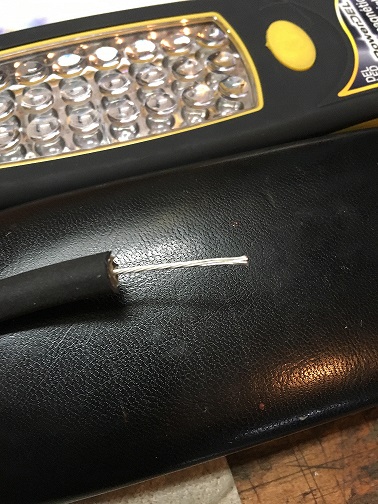 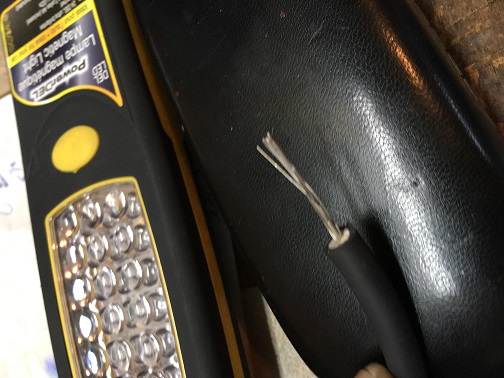 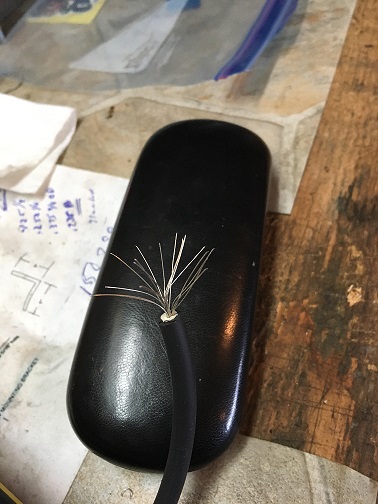