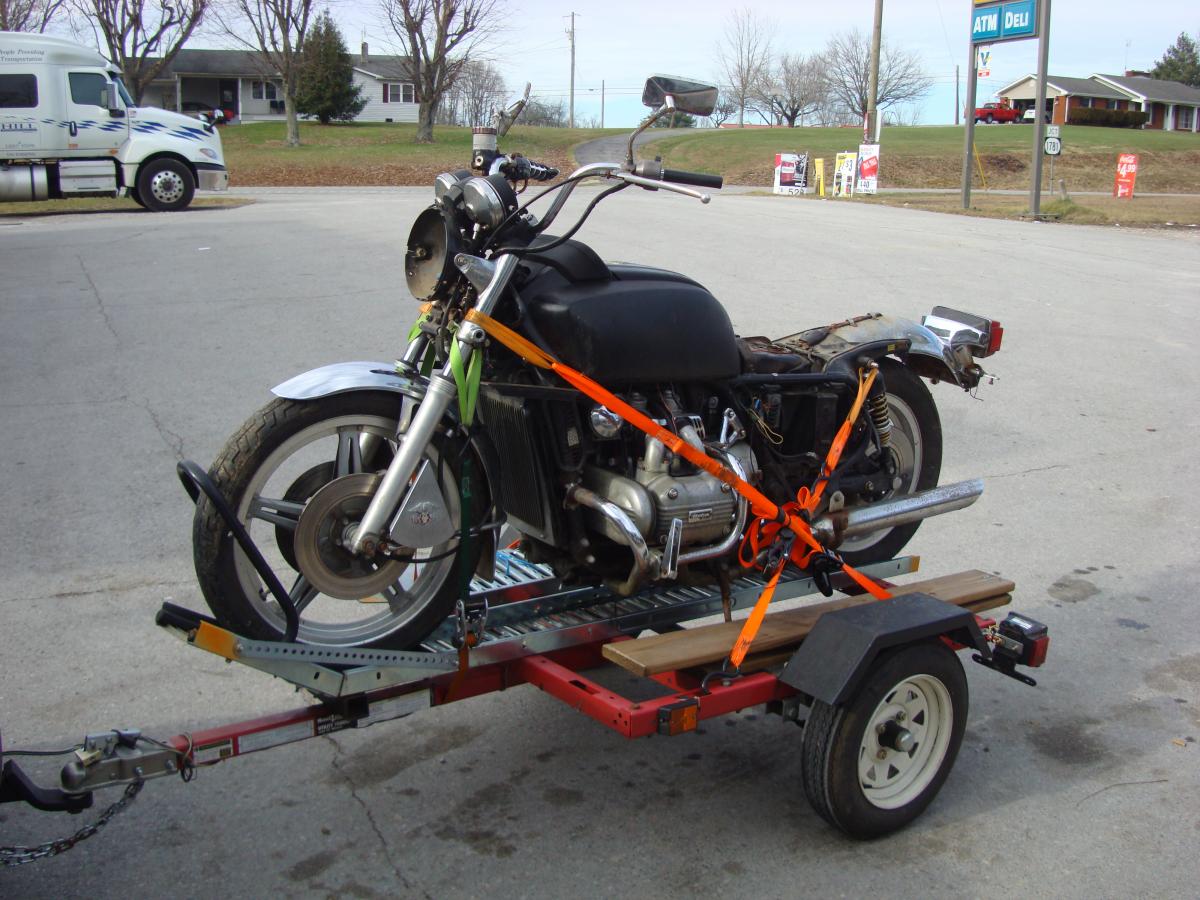 It is a '78. Came with the usual Vetter fairing and trunk, rotted-out K&Q seat, ancient tires. Last ran 9 years ago when his dad parked it in a barn. It turns over (with a ratchet on the alternator bolt). Present plan is to get it half-way complete and running, then sell for what I have spent (hopefully). Will need carb and brake rebuild, tires and belts replaced, seat re-foamed and recovered, frame and tins repainted. Fenders look Ok after straightening the kink in the rear. Need to find someone to swap the rear tail light with me - it has a '79 light on it now.
T

I have a 77 parts bike if that helps.

Thanks. Tail ight assy is about all I see needed until further delved into. Had to chisel the plug off of the alternator bolt access, but I think there is one on my spare 1800 rear end.

Started stripping her down today. Looks like the center stand mount will need rewelded when I get it stripped down. It goes over so far that the foot lever part hits the floor and causes the bike to lean to the right. Discovered an electronic ignition module in it. Turns out it is a Prestolite module. Will probably be pulling this down to the frame and repainting that as there is surface rust where things like crash bars were added. Bottom of the frame looks good, though. Front brakes off. Controls stripped. Intake manifolds unbolted. Noticed a broken off water manifold bolt, but that's pretty common. Penetrant soaking the crash bar U bolts overnight. A quick look in the tank shows minimal rust on first glance. Removed the speedometer cluster and key switch as the guy had lost the key (along with the key to his CB900 Custom) and this one has obviously been operated on. Ordered a replacement switch already. I'll re-key the shelter lock to match. Electrical interface box disconnected, unmounted, and a couple nuts located to hold it together.

Tomorrow I'll take the title down to the courthouse and get it transferred. Then on to stripping more down. I'd like to keep it on wheels until I can get it outside and pump the remaining gas out of the tank, then roll a dolly under the engine, take both wheels and the front end off before pulling the tank out. After removing the rack, I'll leave the engine strapped to the dolly and unbolt the frame from it and pull it off of the engine - probably pulling the swing arm/rear drive off to make it easier.

The rack is off - flipped it over and there are at least 5 different screws out of the 16 bowl screws. Shelter frame removed and most of the electrical system disconnected/unbolted. Very poor 3 yellow wire connector replacement. I just cut the mess out and will use my RC hobby power connectors. Measured continuity between all three and none to ground so, that's good. Besides the missing three-wire, the eight position connector to the rectifier is toast. One connector melted, and one end on both male and female disintegrated. I'm convinced the proximity to the battery fumes causes this. All of the other connectors look Ok, so I hope they clean up well. I'm stalled until after Christmas as I have to do an oil change tomorrow and a few pre-Christmas chores. Hopefully after the holidays I can move the '79 back to the other side of the basement along with the Hunley so I have more room to work. I'll need that room to pull the engine. Also ordered a new 10L US cleaner tonight. And ordered a new(used) petcock - the outlet barb came off with the rubber line. 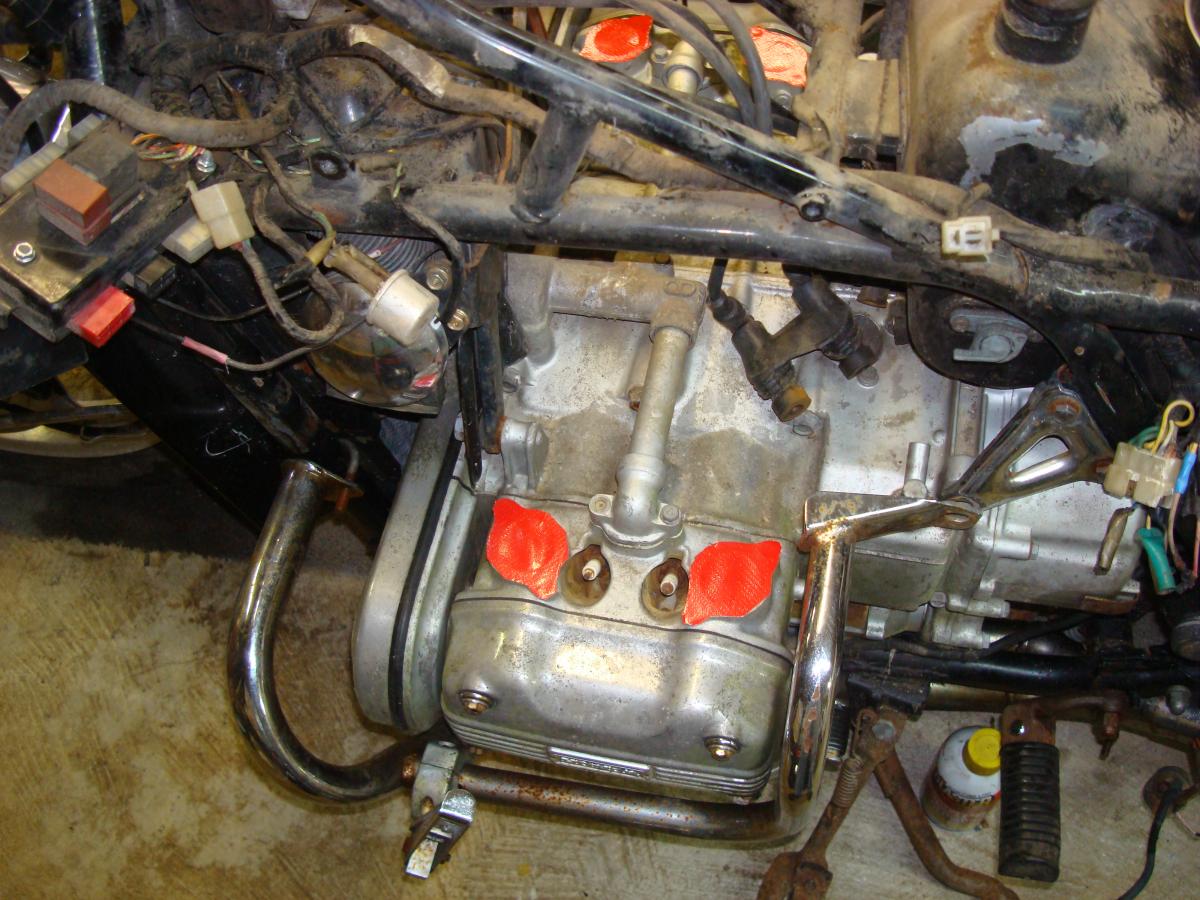 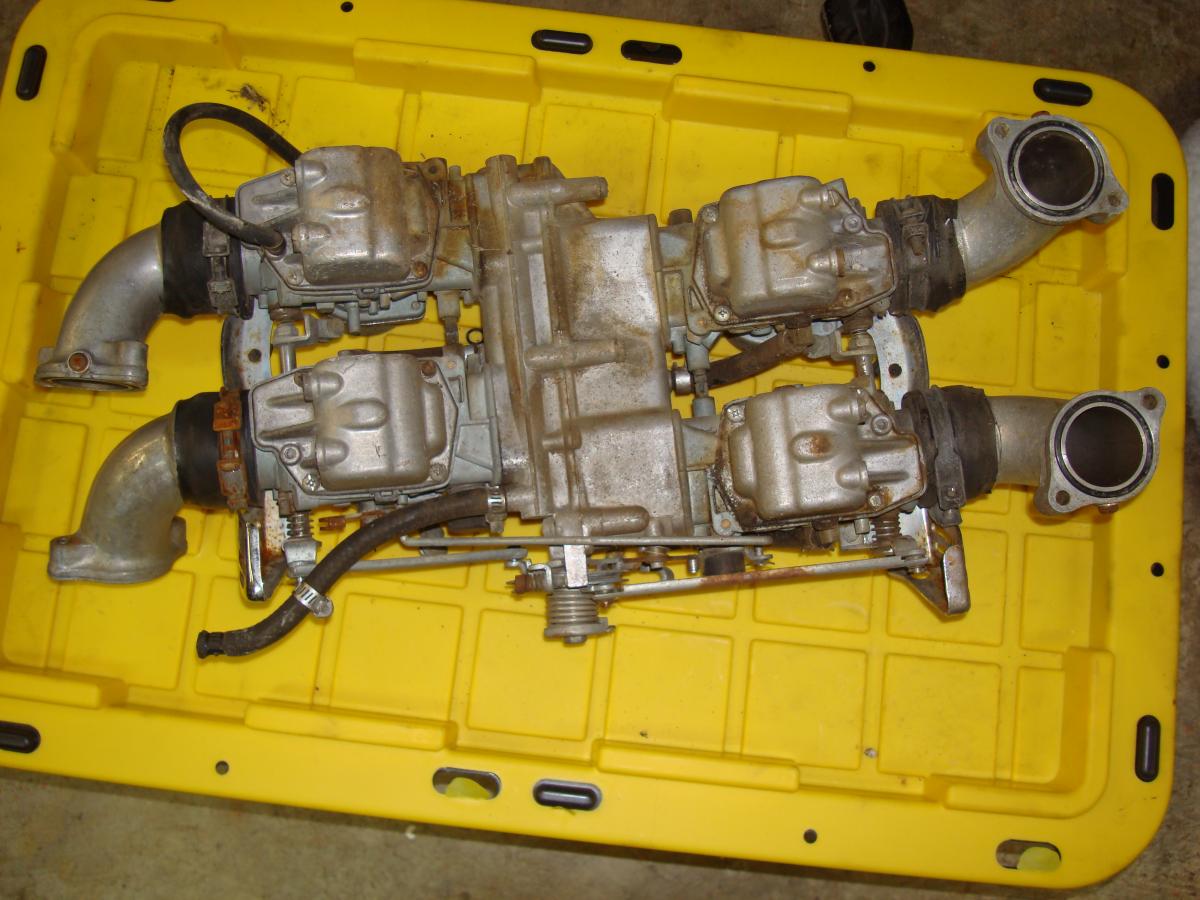 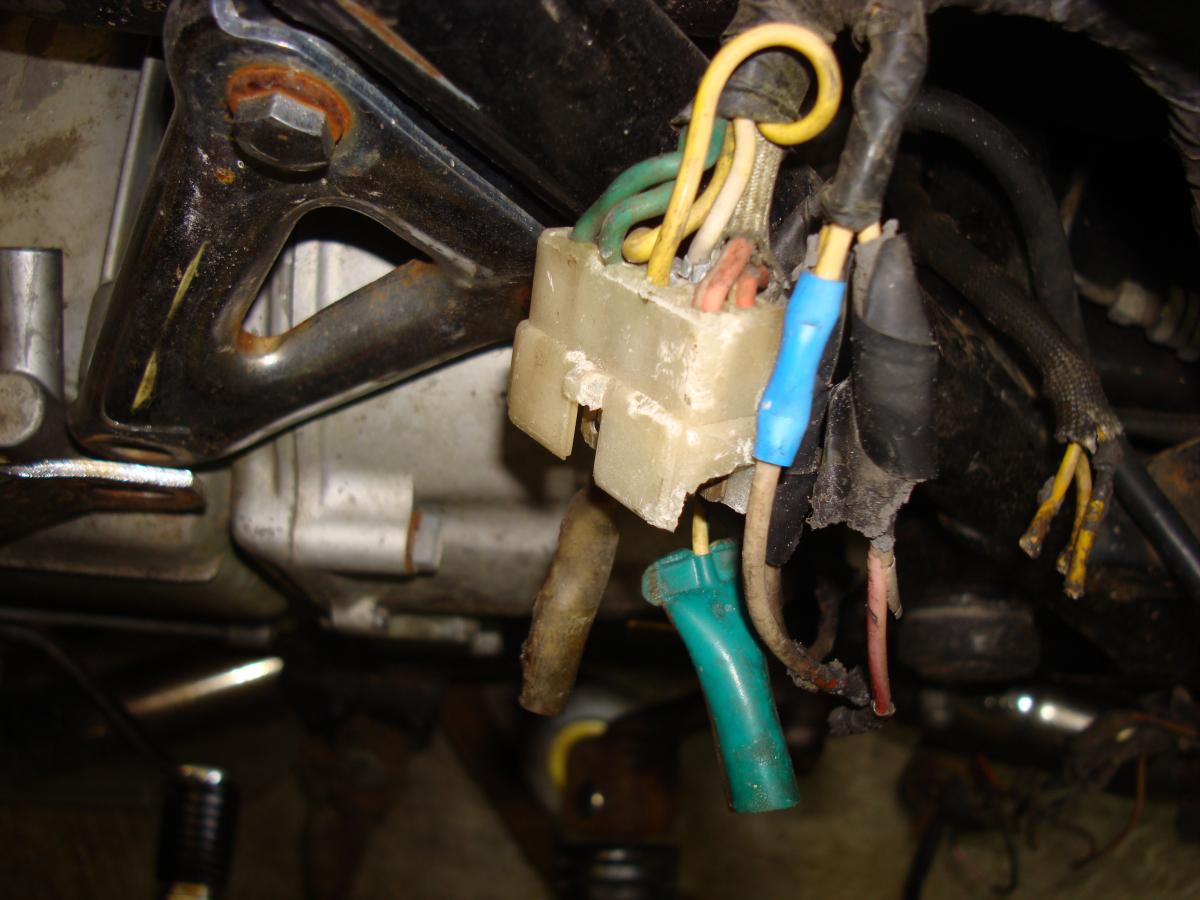 While waiting for it to warm up so I could change the oil in the Equinox, I pulled the exhaust, wiring harness, front brake lines (trash), crash bars (also trash) and inner rear fender.

Sounds like the typical problems with a bike that has sat for long time after it got to where it wouldn’t run ...

Radiator removed, belts changed, oil (~2 quarts, but clean looking) & coolant (~a pint) drained. Oil filter removed (no spring on cartridge, but at least not one on the wrong side). No one carries the CH6009 oil filter around here anymore, so instead of forking over $14 for a K&N, I ordered 4 on Amazon for $16.99 (total). Bought some 15W40 Delo that I plan to cut with some Marvel Mystery Oil for this fill as it wil be for checking compressin and storage until ready to try starting. Bargaining with wife to get a space on the other side of the basement to store the '79 so I'll have enough room to pull the motor on this one. She is concerned that it might disturb her "systematic hording". 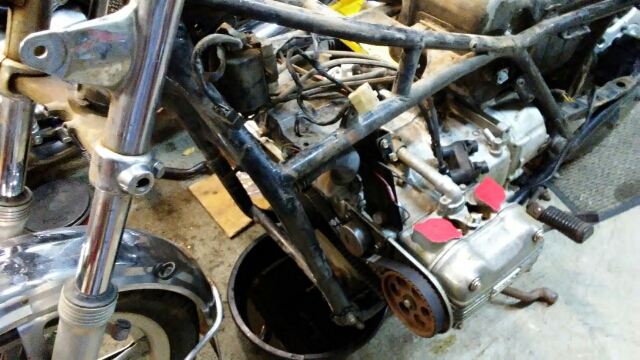 Got the pistons out of the front calipers using the grease gun method. Both pistons will need replaced. The right front was a mystery. I'm not a great mechanic and have pulled some boners, but I wonder if a PO ever realized why that caliper didn't work? This was installed as a banjo bolt. 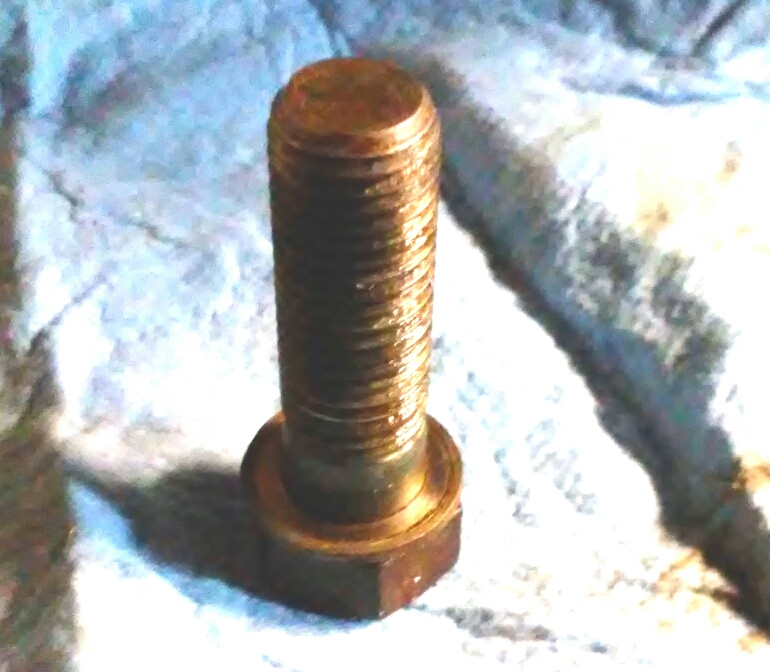 [url=https://www.classicgoldwings.com/forum/viewtopic.php?p=215137#p215137:1i2uyg7o said:
pidjones » Sat Dec 28, 2019 6:01 am[/url]":1i2uyg7o]
Got the pistons out of the front calipers using the grease gun method. Both pistons will need replaced. The right front was a mystery. I'm not a great mechanic and have pulled some boners, but I wonder if a PO ever realized why that caliper didn't work? This was installed as a banjo bolt.

Maybe that caliper was already stuffed and that was his quick fix. Either that or he was an old Harley guy and just didn’t like “all” that front brakes! :doh:

I guess that I should add here that aside from being a winter project, I bought this as my entry in the Time Warp Vintage Motorcycle Club's "2020 challenge" - to get 20 bikes out of the garage, barn, (in my case a fence row) whatever and back on the road. Last night we were up to 16 paid-up entrants. We put $50 each in the pot to enter, give the bike we are restore/rescue/building, and in June we take a short (50 mile) ride together, returning to the Time Warp Tea Room. Everyone who finishes the ride puts their name in a hat and a drawing determines who gets the pot. We will have to turn off and restart the bikes at our destination for the ride, but have promised to stop where there are hills to help. Entries must be >25 years old and we already have a broad spectrum from 75cc to my 999cc.

[url=https://classicgoldwings.com/forum/viewtopic.php?p=215137#p215137:2gjt2c94 said:
pidjones » 27 Dec 2019, 16:01[/url]":2gjt2c94]
Got the pistons out of the front calipers using the grease gun method. Both pistons will need replaced. The right front was a mystery. I'm not a great mechanic and have pulled some boners, but I wonder if a PO ever realized why that caliper didn't work? This was installed as a banjo bolt.

Well, there are many reasons why we are able to get a good deal on older bikes, and this is just one excellent example, lol!
There seem to be a lot more do-it-yourselfer-wannabes than there is actual talent out there, which is good for us, right?

Moved the '79 out of the way and put Johnny 5 in an open are of the garage so I could get it up on jacks, then jack stands, then drop the rear end down so the tank could come out (not hard when you have it stripped down this far). Drive splines look pretty good. The bleeder broke free, so pumping the frozen piston out of the rear caliper using the grease gun should be pretty easy. The rear master looks pretty bad, but you never know until you dive in. New 10 liter 240 Watt US cleaner came today. Should handle the carbs with ease. 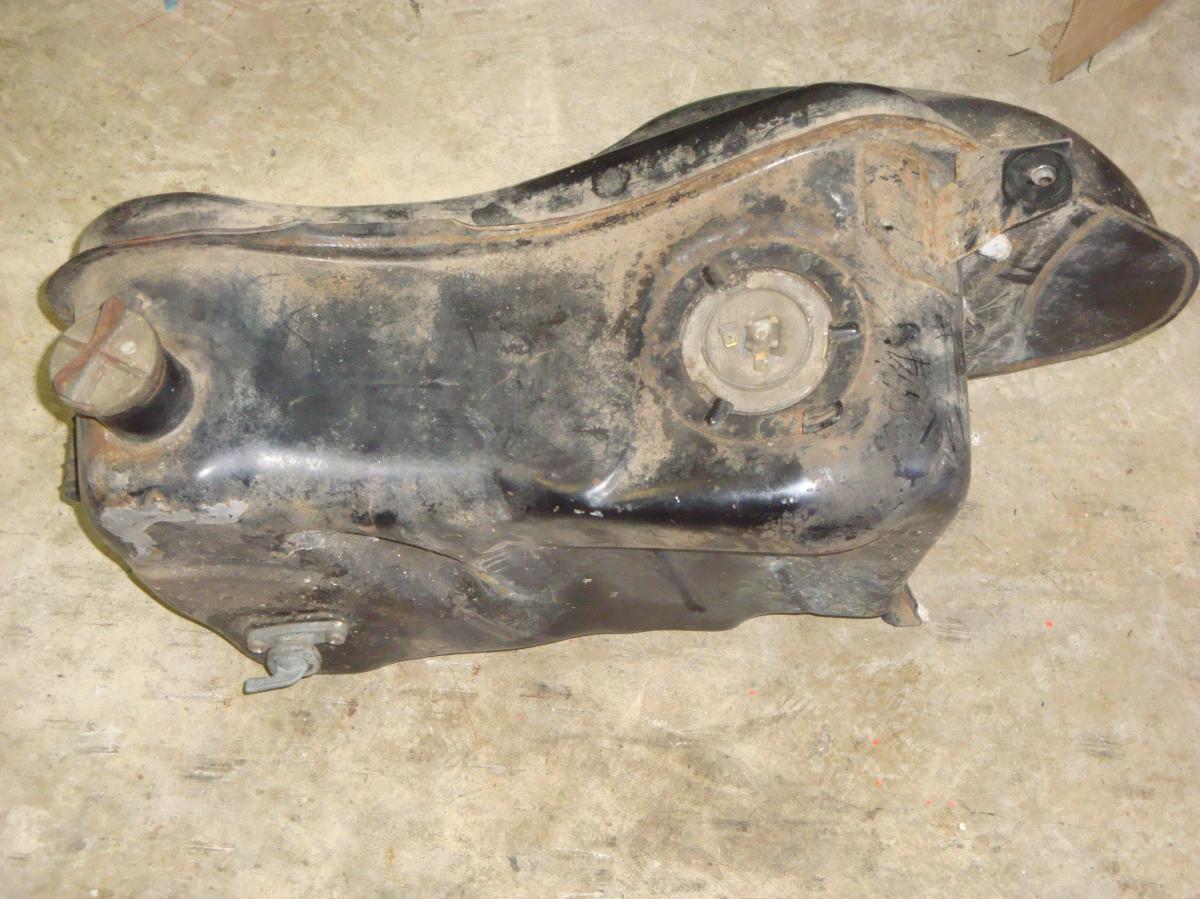 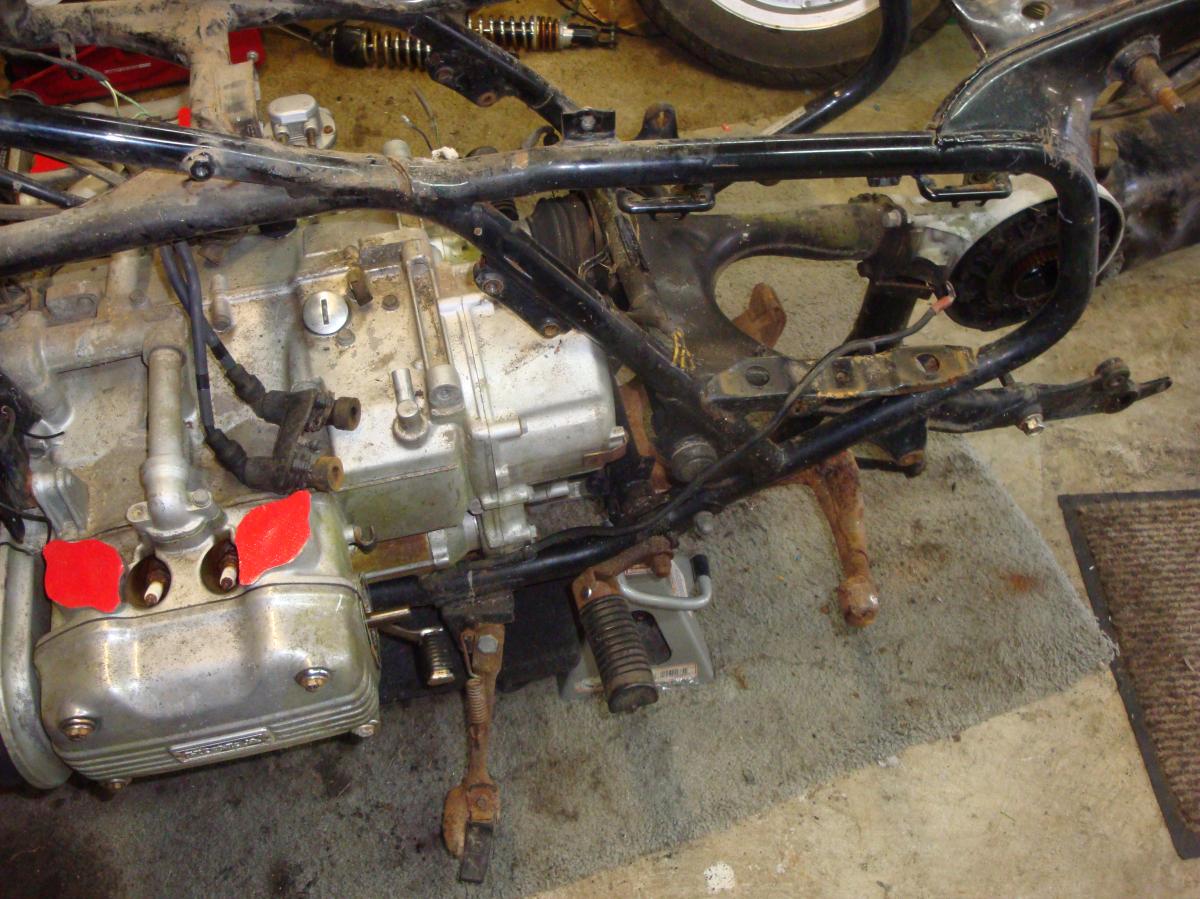 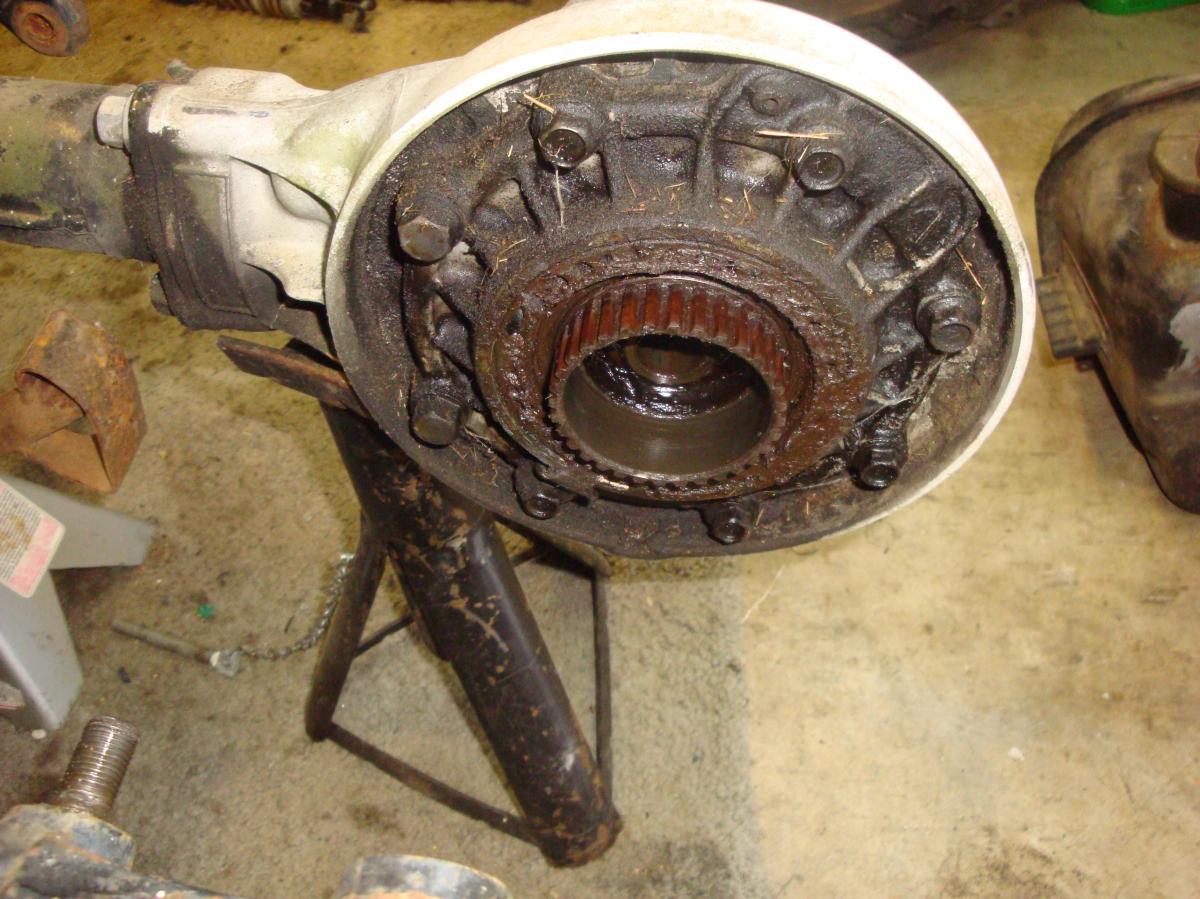 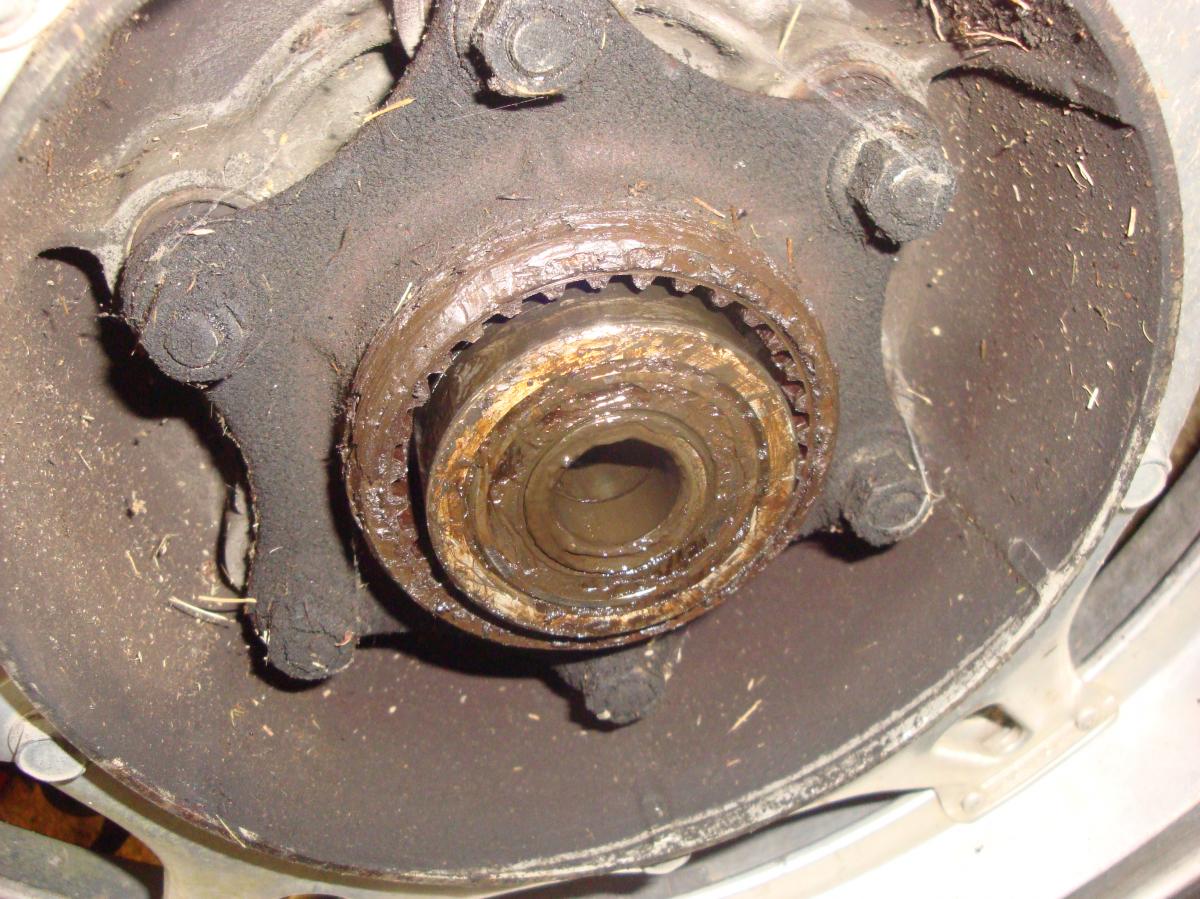 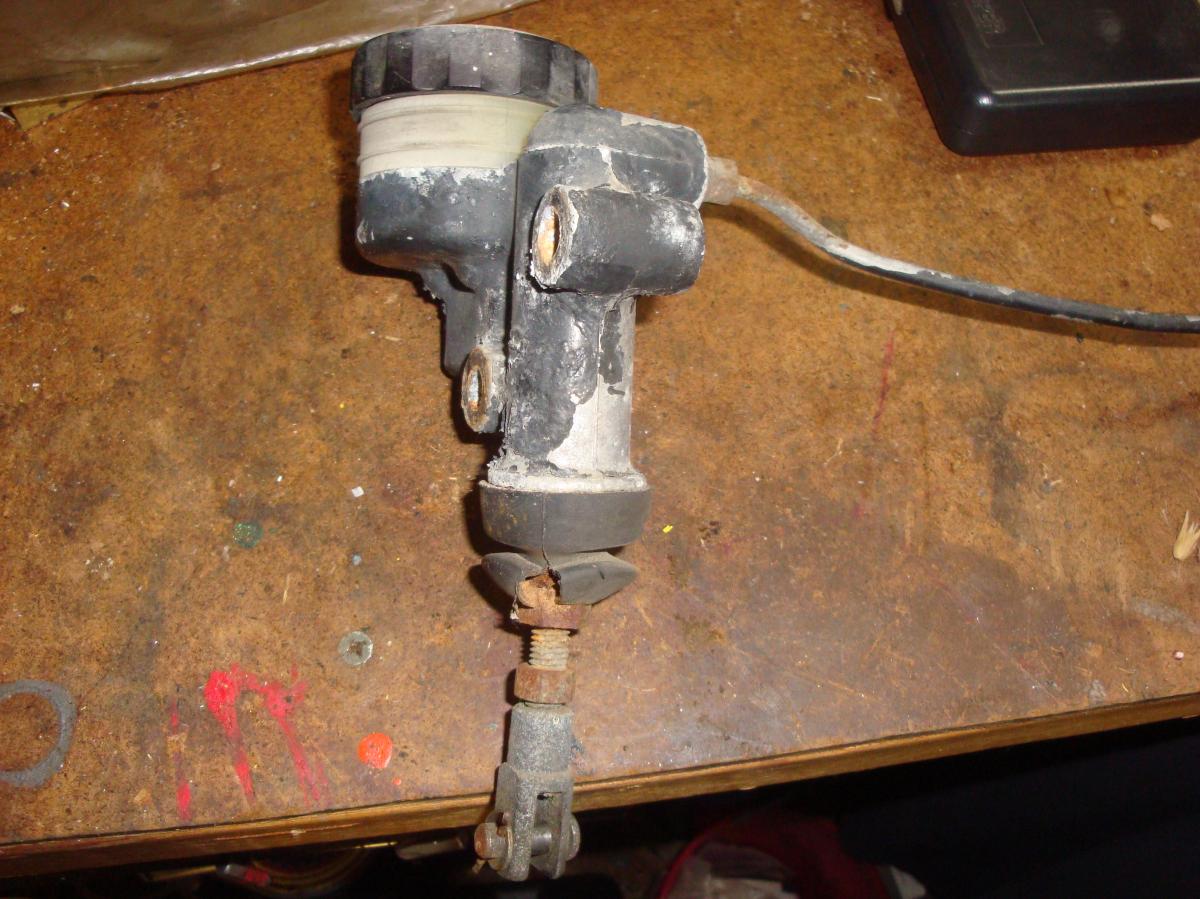 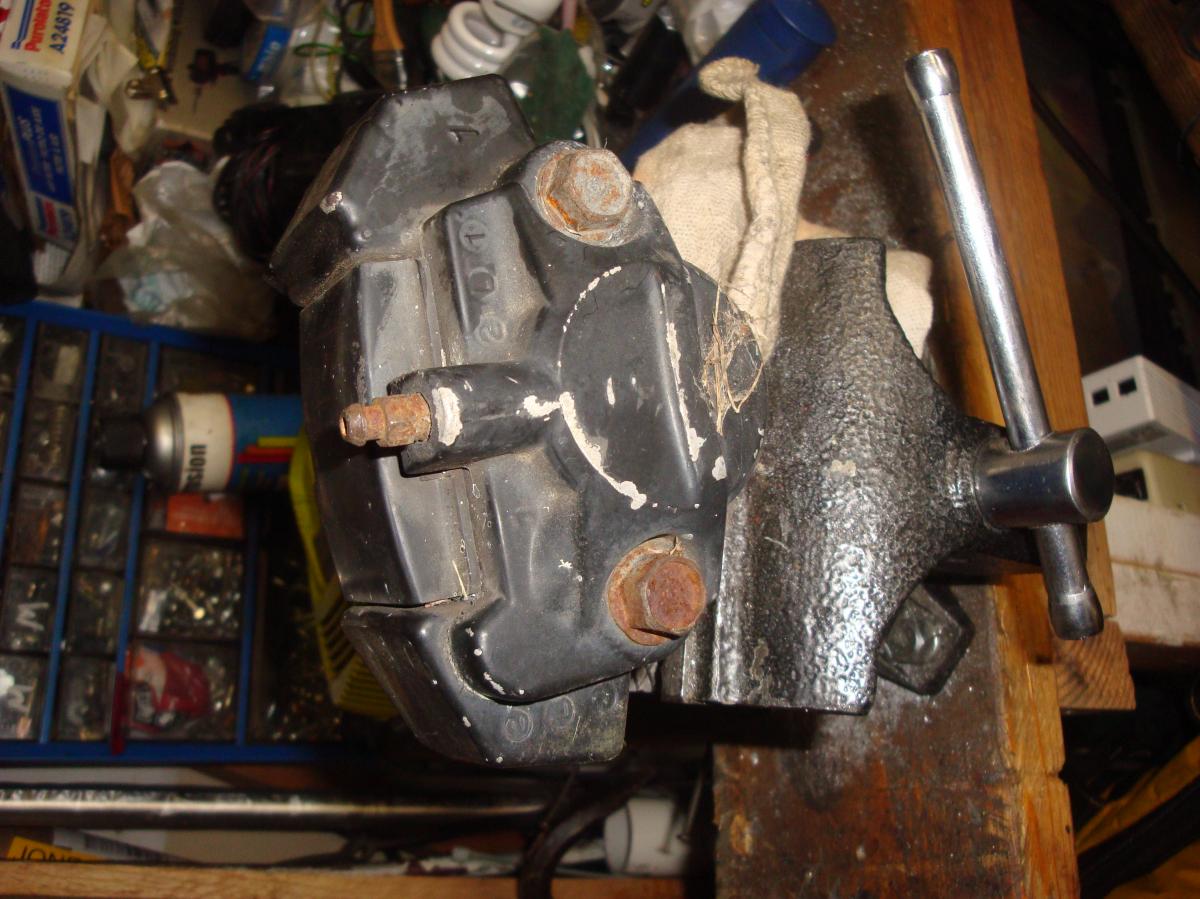 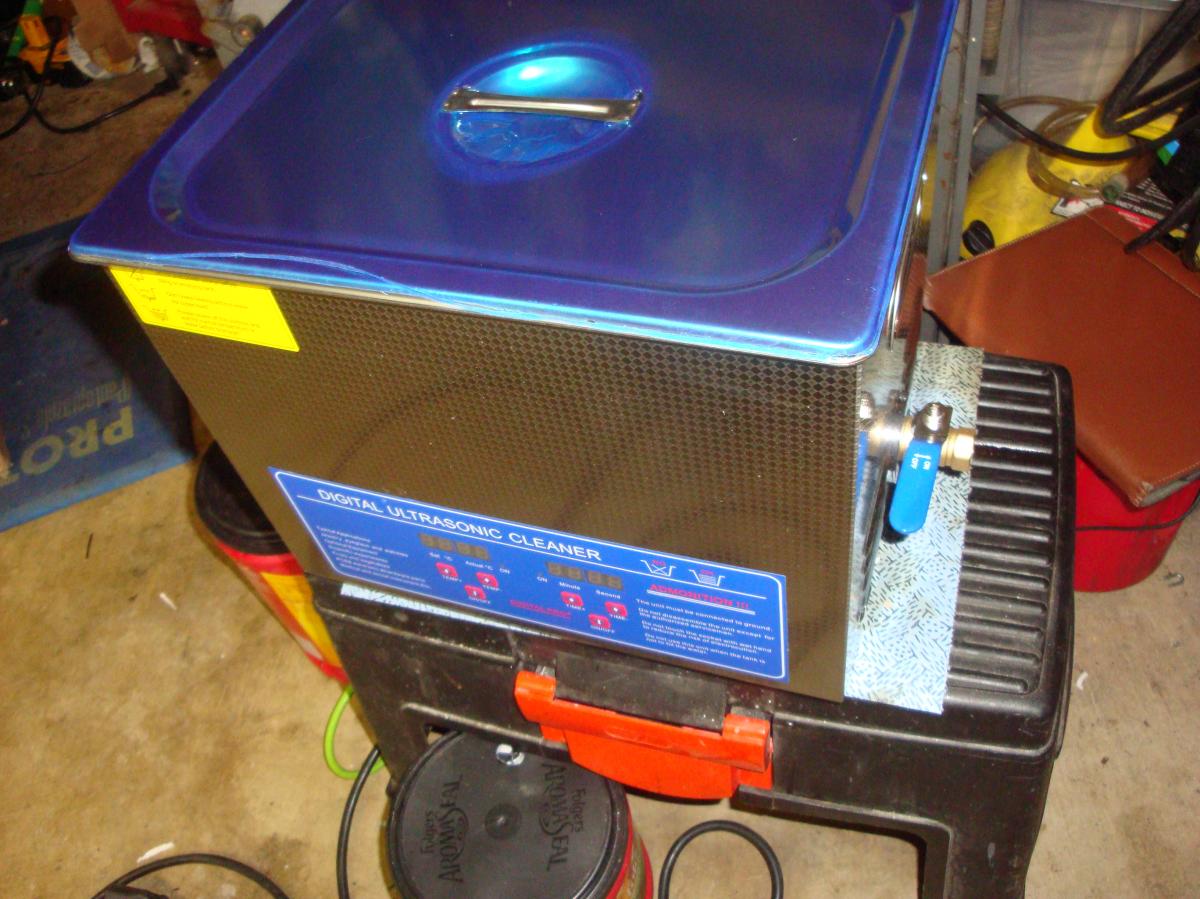 New oil filter (this time with a spring!) About a pint of MMO in 15W40 Delo oil. Let's check compression (no worry with throttle or choke - carbs and exhaust off). 165, 110, 155, 105. Actually, 2 & 4 were worse, but kept getting better (as kind of expected). Checked valve lash. Changed it from .009 to .005" on all. One of the left head water pipe bolts looked to be broken off at the top of the flange, but turned out to just be filled with a mud dawber nest. Cleaned and retapped and it is good.

4into1 order in today. Drained the oil, pulled the filter, jacked up the front (rear is on jack stands) and pulled the front wheel. Then lowered and strapped the engine to the dolly, pulled the jack stands out and then pulled the forks out of the trees. Evident now that steering bearings need replaced, so put them on order along with fork seals and a push throttle cable (why do they always go and not the pull?) Tomorrow, need to disconnect the drive shaft and pull the swing arm. That should leave unbolting the engine frome the frame and pulling the frame off. Then I can start the carbs (looking forward to trying the new 10 liter US cleaner).

Going after it you are ...nice...have fun

joedrum":hfwvnpgh said:
Going after it you are ...nice...have fun
Click to expand...

It is a lot of fun, Joe! And I have to stay at it because deadline for the challenge is about the 2nd week of June (to be finalized at our January meeting). Still needing frame work (possibly some welding) before striping and priming, then paint (planning to use Rustoleum appliance epoxy - really an enamel - that the cafe guys are using a lot of now). Plastics will need painted too, but not sure of color yet. Don't want to invest too much as the plan is to sell it after the challenge ride. I want it to be right, though.
Share:
Facebook Twitter Reddit Pinterest Tumblr WhatsApp Email Share Link