the Hunley, or pidjones needed a project - '78 frame with '75 engine

nice very nice ...this bike will be really special

I just love it when the guilty party(s) are a little obvious. I had planned to put the carb work on the Hunley off until winter, but I finished taking the deck off of the John Deere, scraping the year's buildup from under and pressure washing it and putting it away. Then mounted the blade carrier, snow blade, and chains to ward off bad snows. Not having parts on hand to go forward on the 750, I moved crap around in the garage in preparation for carb work. Rack all set up and ready for disection, I strolled up to check the mail where of course I found brake pistons, tach cable, speedometer cable all for the 750 and the new timing gear for the motor on my little lathe (it may be cheap Chinese tool, but very handy).

So, I thought at least pull the #2 slide cover, slide, and float bowl. The needle looked fine, but I wanted to compare it to another so I pulled #1 (which appears to be great). #2 was a couple mm longer, so I pulled both needles and squinted real hard to read the numbers. Different, of course. Looked in my carb box and sure enough I had one of the originals in it so it was cleaned and installed. I doubt this was my main problem, however. In the float bowl, I found the float way high and croked. That was easy and I doubt it was my main problem, either. But then I pulled the primary and secondary jets and found this o-ring with a guilty look on its face.

So, tomorrow back to brakes on the 750. I hate brakes.

me too hate brakes and brake fluid yuck

Probably about all I'll do on it. I first rebuilt it in '13 when I bought the bike. My first set of GL1000 carbs. They were all cleaned well and checked, but I must have not been paying close attention when I did #2. The other cylinders perform very well.

The Rocket has front brakes! And even better, they aren't leaking. Still some bleeding and working out of trapped air. Waiting for delivery tomorrow of coils and plug caps. Which lead to an attempt to start some time next week. Rerouted the clutch and throttle cables again, this time outside the headstock triangle like the FSM addendum shows for the F bike. Much better! Thinking the rear wheel comes off next, though. Need to check the bearings (if anything like the front, I should have already ordered new ones, but they sound and roll pretty nice.) I still hate brakes.

Wife and I blew and shreded leaves today. Third time so far this Fall, and looks like we'll need to do it as many times still. Takes all morning and is pretty tiring. We fill a big sand delivery bag ~1 cubic meter of shreded leaves just from the front yard. We are boardered by woods on three sides and have a strip running through the midfle of our lot. At least we can dump & blow into that strip - and it is all downhill to it.

Sunday I took the singular weather window for painting and laid down 2K rattle can clear coat on the shelter sides, side covers, and front fender that I had resprayed the lacquer on a couple months ago. I was not very happy with it as immediate results were a milky mess with runs, dust nits, and a gnat right in the middle of a shelter side. But I was encouraged by folks on the DTT forum that a) the milkiness would go away as it cured and b) I would be able to wet sand and buff the nits, gnats, and runs out. Today the sandpaper came out soaking on a tub of water with a couple drops of Dawn. 1200 grit, then 3000 and finally 7000 on the runs. 3000 and then 7000 on the nits and gnat. Buffed with 3M polishing and finnesse compounds. Looks pretty good. Tomorrow I'll move the Hunley back in from the family room and mount up the carbs and tins. She'll go back to the family room for the winter, then.

Did the imperfections sand out?

dan filipi":t1eoyiy3 said:
Did the imperfections sand out?
Click to expand...

The runs in the clearcoat sanded out, as did the dust nits. The gnat sanded down to look like a speck of dust. The original boogers were all removed prior to the new lacquer coat, but one found a way to hang around. It looks like a hair, now. Mounted the carbs and tins back on today. She's looking pretty sharp!

That sure is looking sharp! I love the colors!

Shaking off the winter blues by showing the Hunley this weekend at the Knoxville Cabin Fever show.

First place Honda (yippee, there were only three!) Fun show, a LOT of cars!

Been having a lot of fun showing this bike at nearby shows. Today we took her to Stearns, Kentucky for their Moonshiner's Run Car Show. HOT, but many really nice vehicles there, and I always try to get some photos of the Hunley with the pinup girls if available.

BTW, the blonde is headed for Afganistan in 2 weeks for 9 months. 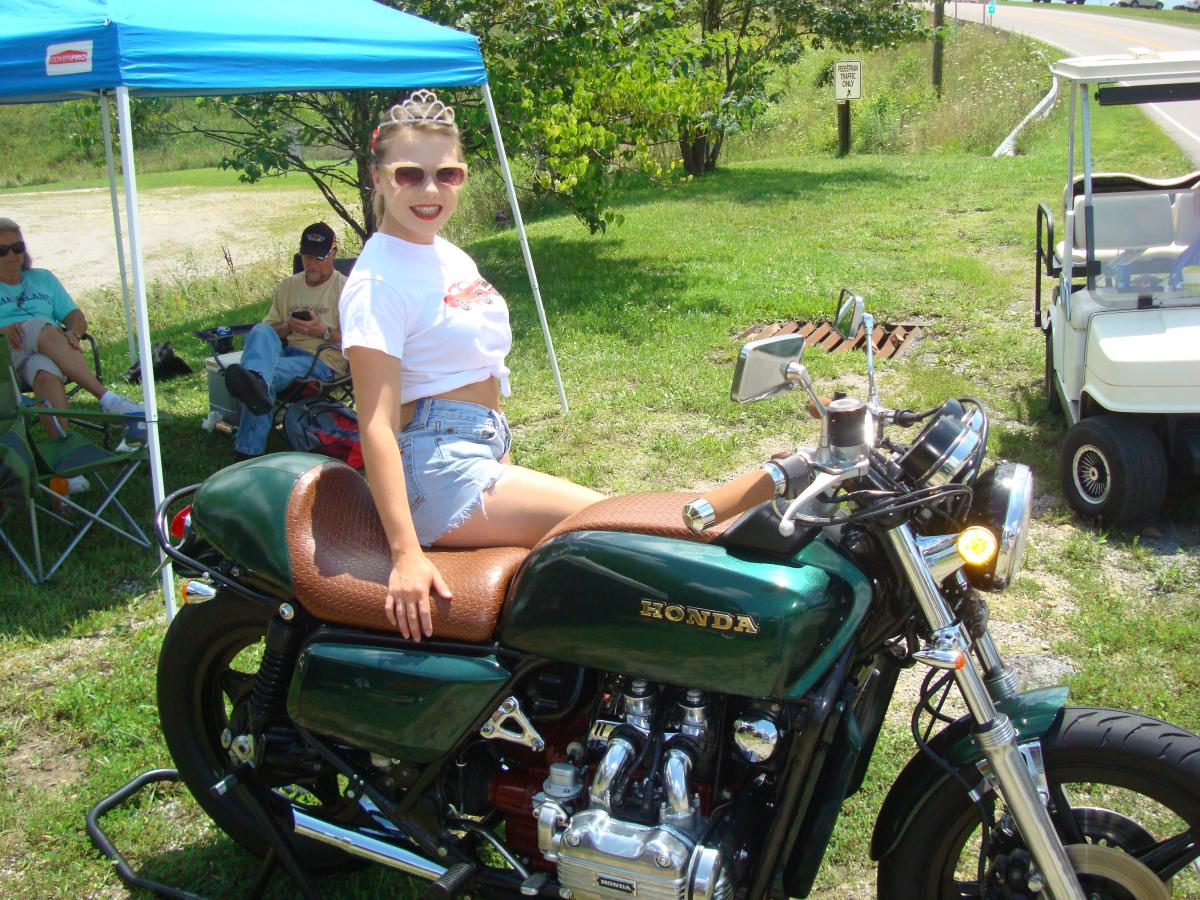 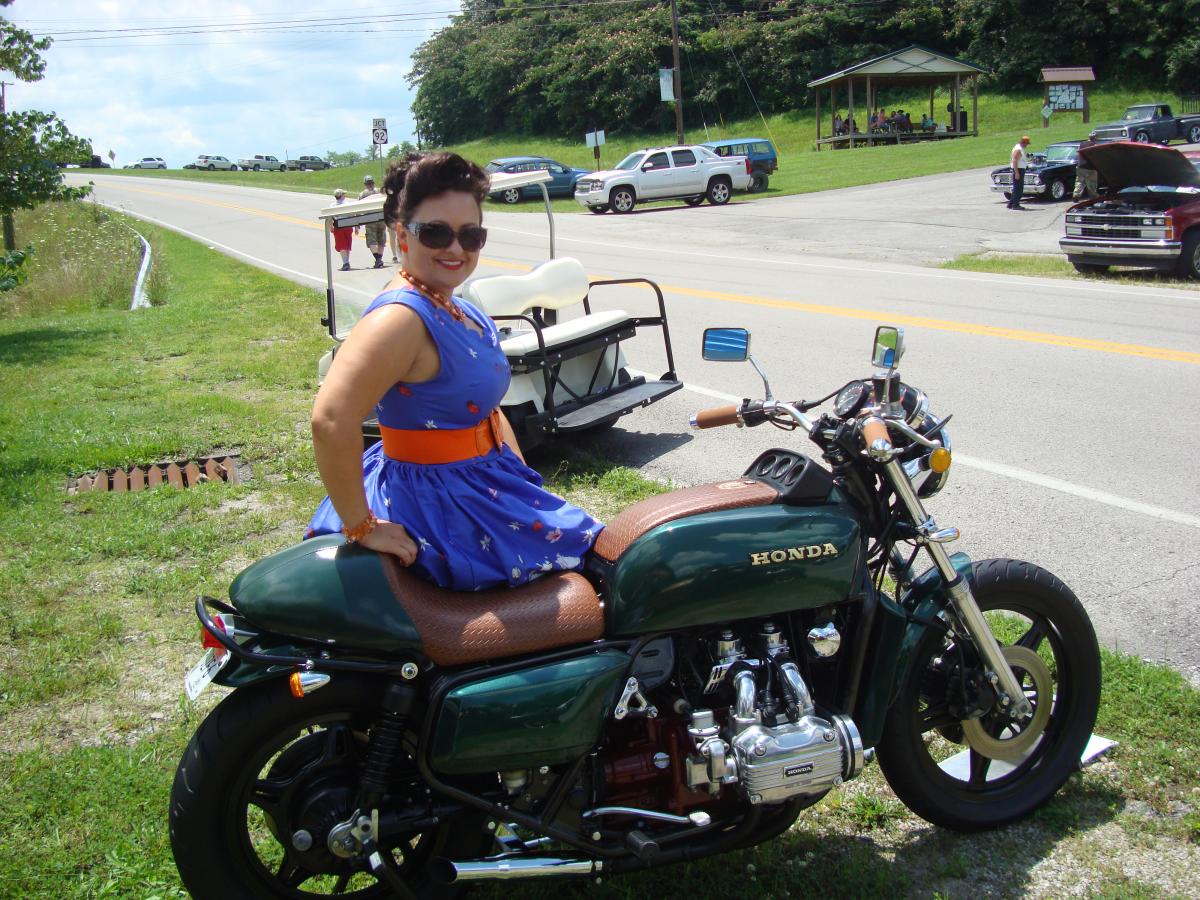 Been fighting a problem with #2 cylinder fowling the plug rapidly. Finally pulled the rack (again) and carefully examined #2. Airjets in correct place, o-rings looking great, float level correct, passages open, needle pretty worn in rings, and AHAH! Needle jet seriously worn! For now I replaced the needle jet ('75 one-piece) with one from the '79 junker (2-piece with more emulsion holes) and an aftermarket needle that measures correct. I'll search for the correct jet and needle. Need to get it back together for strobe timing and carb sync because I have a show for it the next four weekends. 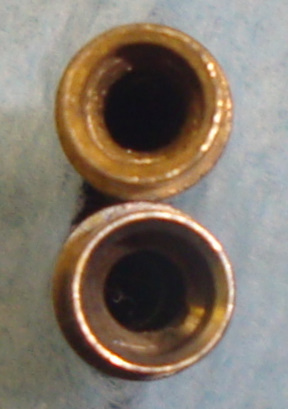