One step forward, two back today. Put in a gallon of oil, tried the starter in short intervals until the oil pressure light went out. Put a plug in the #2 and 4 plug caps - both firing. Started mounting the radiator and noticed an oil drip. Neutral switch (coming out of the switch). I have a spare, but that will wait until next weekend as we are going to my ship's reunion next week. Drained the oil back out into clean pan and returned to the jug. Oh, well.

Got home from the reunion (a great time with old shipmates) around noon. After a nap and some muscle relaxer for a sore neck, I went down to the garage, swapped the neutral switches, cleaned the horns to get them working, and cleaned the front brake light switch to get it working. Tomorrow I'll go to Honda and pick up a few crush washers, fill the oil back up, and hook up fuel lines.

SHAZBOT!!!! Put on new fuel lines, started adding water (water before antifreeze - just to check) to the radiator and water started pouring out of #4 exhaust port. Hopefully just a head gasket (but the compression looked good!) I have a couple spare head gaskets on hand, I think. Just hope there isn't a pile of rust in the cylinder from setting with antifreeze (hopefully) in it, but won't be surprised with whatever I find on this pig. It does turn over easily with the starter, so that is a positive. Not like I haven't seen similar things before. On the good side, the 1/4" fuel line that I picked up from NAPA fit nice and snug, and I haven't seen any oil drips this time. Water is drained, and I may just leave it there until tomorrow afternoon or Monday. Good thing I didn't mount the exhaust yet.

Aep. That be a blown had gasket alright. Rust in the cylinder was just surface and wiped out with a paper towel. So, tomorrow I get to do one of my least favorite tasks - cleaning off the old gasket and the surfaces. Might replace one head bolt (I have spares) due to rusty shank.

A bit of a setback. :cheeky:

Cleaned and back together with a new gasket and torqued. Letting the shellac dry holding the gasket on the belt cover before it goes back on and getting some new screws for the points area. It's holding water now. Haven't done a compression test yet. Only one dowel was buggered, and I had a new spare for that. 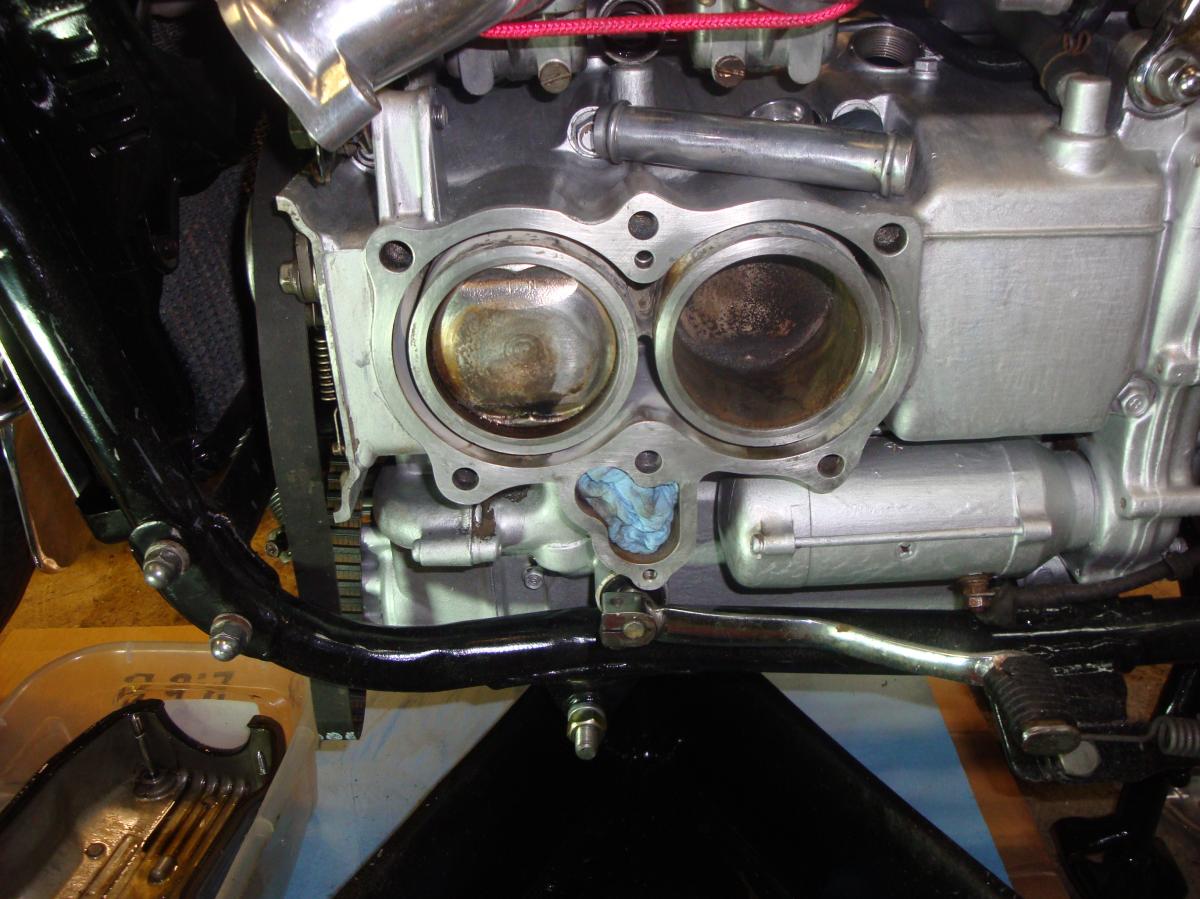 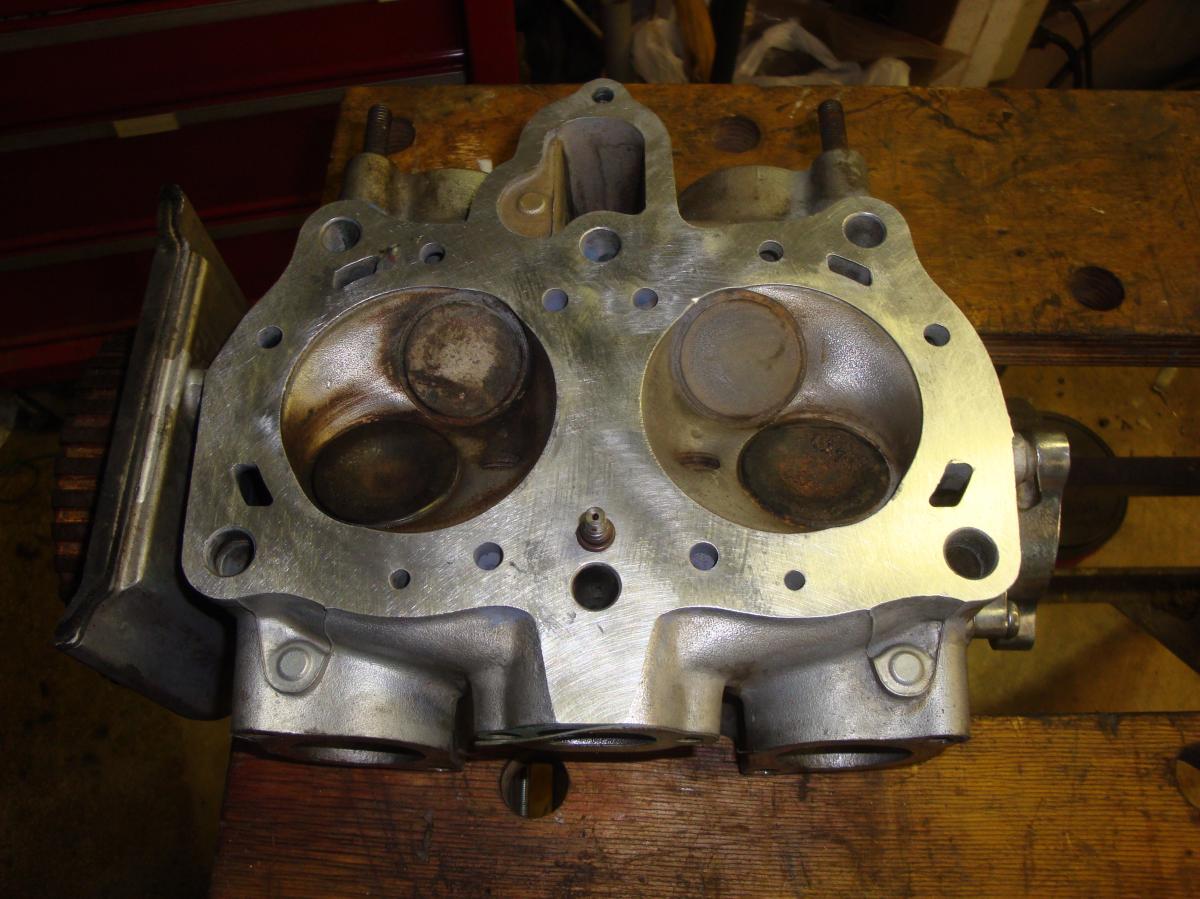 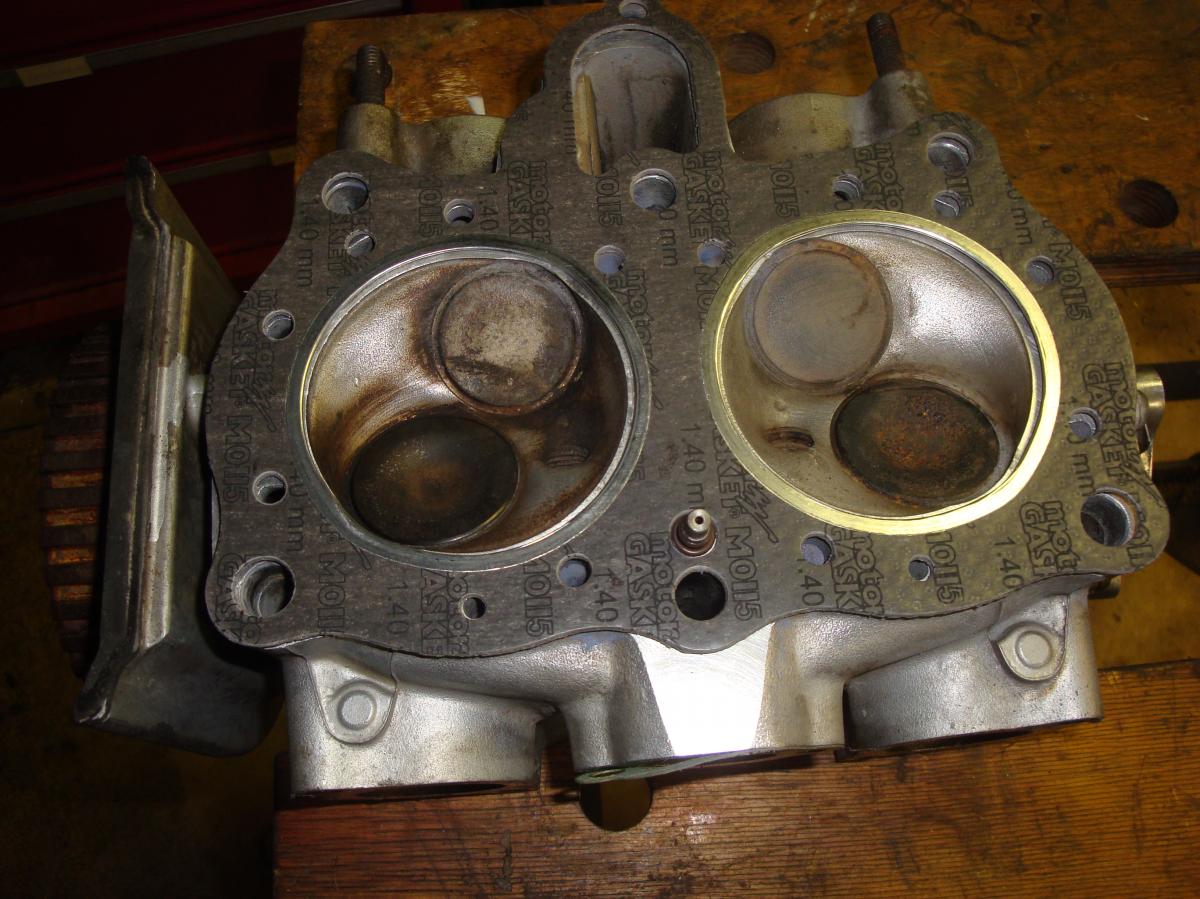 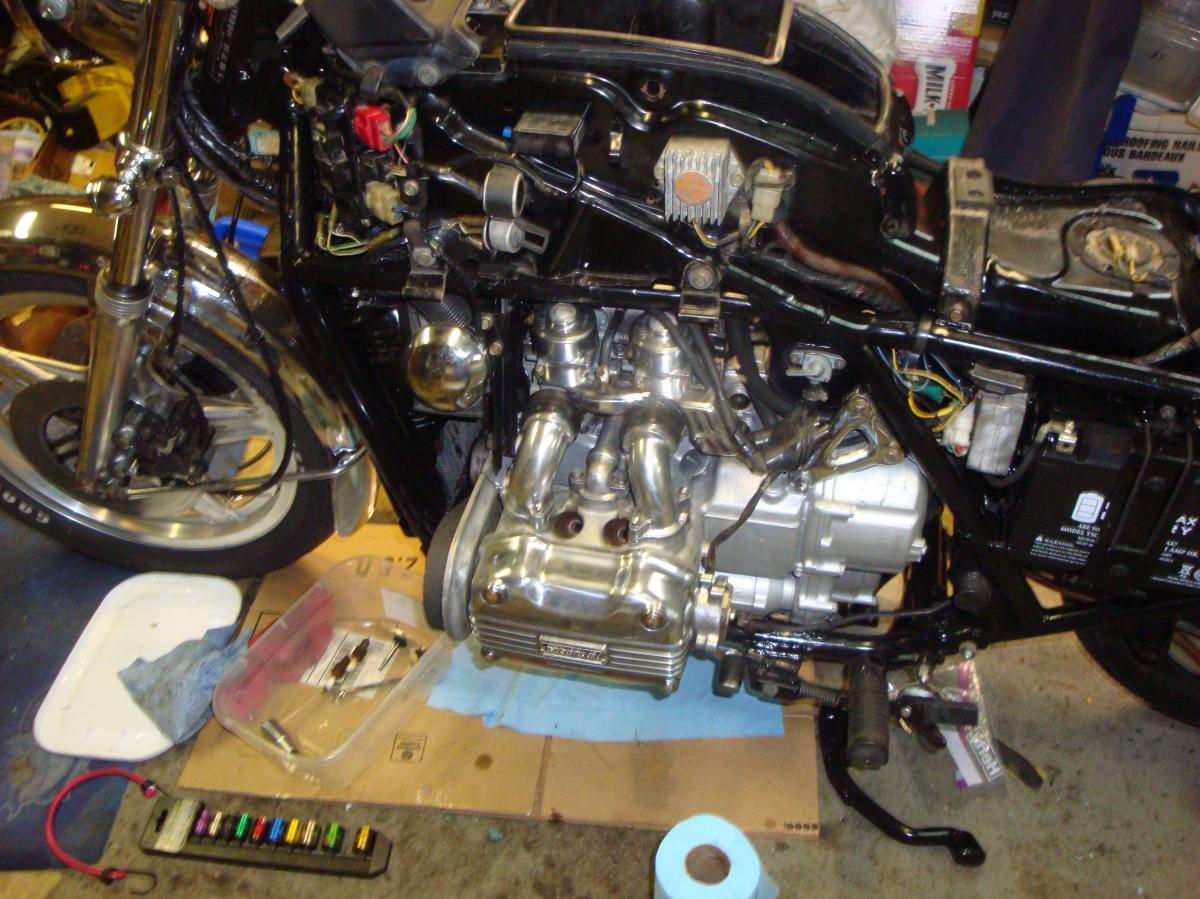 Filled and bled the front brakes, looking good. Tried with the rear, and the seal between caliper halves is leaking. I had hoped that the old seal could be reused, but no. The only remaining source that I can find is Randakk, so it is on order. Meanwhile, hauled the K&G out of the shed and began trimming off the parts that stick out too far. Wire wheeled the rust from the seat pan and put two coats of etching primer on it. Tomorrow I'll go to Home Depot and get some carpet padding to fill in the areas that are too low so that I can mount a standard aftermarket cover on it. This seat had the cover mounted with pop rivets, so I might need to pick some up while out. 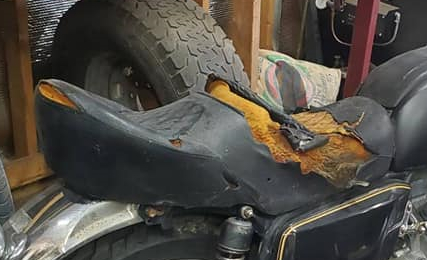 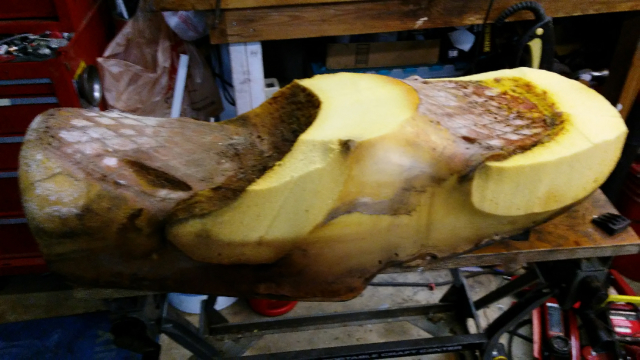 Not much progress today, but still something. The shelter door was in bad shape - naugahide peeling and bubbling up, door rusted, etc. Not spending a lot of time on it, but stripped the old cover off, cleaned and primed it with etching primer, went out the shed where I had some fresh naugahs that I had trapped skinned and drying. Used 2M 80 to glue it on. 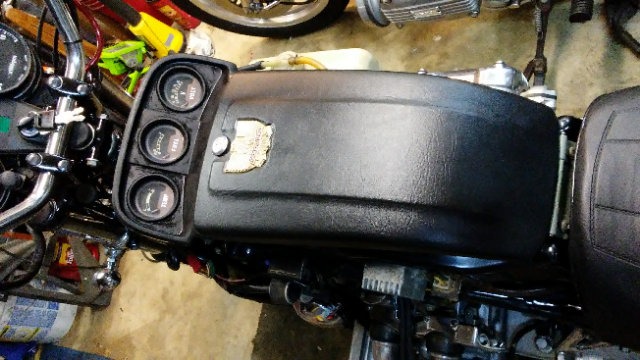 Thought those naugahs were on the endangered list :BigGrin:

Not here! The naugahs were imported from Europe during the colonization of North America. Much like feral hogs, they were turned loose to feed off the land until autumn when roundups were held. Over much of the continent they did not flourish and were farmed but in the mountains of Appalachia we have well-established areas (or "couches") with feral naugahs. The increase in plastic shopping bags and the careless disposal has really boosted their food supply.

So far, the side covers are sanded and primed with etching primer as is the little plate over the shelter door hinge. Also the radiator scoops. Shelter sides had been primed with I think a sanding primer and painted with a thin layer of flat black. Makes it pretty easy to see all of the pock marks in them, which are very many. I've skimmed the worst one with Bondo glaze several times already and it works in small cracks and divots, but comes off from shallow depressions when I sand, so I'll try sanding primer. I found on the Hunley that I have to really let it cure before painting over it, and must seal it with etching primer first. Rolled Johnny 5 out again and fired it up - starter over-running clutch is still not engaging ~50% of the time, but when it does it works fine. Hopefully the MMO I added to the last oil change will do the trick. Luckily, the engine fired off pretty easy. I found that one of the idle mix adjust screws was not even started in its threads, so after screwing it in and back out to 2 turns along with setting all at 2 turns it really idles nice. Still have to balance the carbs, but I've never had problems doing that - might catch it tomorrow after tilling the garden for the wife and climbing on the roof to check antenna connections and aim. Front tire came today but I don't know if I want to go to a shop and get it mounted right now. At 67 and mild COPD, it may not be the best thing to do. Guess I could arrange to drop it off outside their door and pick it up later with payment by card or PayPal.

Today the weather was right, I picked up the front wheel with new tire mounted. Rolled her out, put on gear, and took her for a ride out the road and back. Brought her back behind the house, lowered the idle and advanced the time some (haven't put it on the light yet). Smoothed it out a lot. Took her for a loop in the valley total of 8.7 miles today. Running better as miles pass. Brakes bedding in fairly well. Need to pull the tach and lubricate it but the speedometer seems fine (normal Honda optimistic I'm sure). The Jardines are a lot louder than I like, but I don't plan to keep it. Seemed to ride well. I had air pressure too high and will adjust before next time. I'm just used to the GL1800 radial's pressures, so I'll reset them to 28/32 from 38/36. Might get a day soon that I can put the first coat of lacquer on the tins. Once I get to clear coat, I need to find some coveralls and of course they are all gone from the stores. 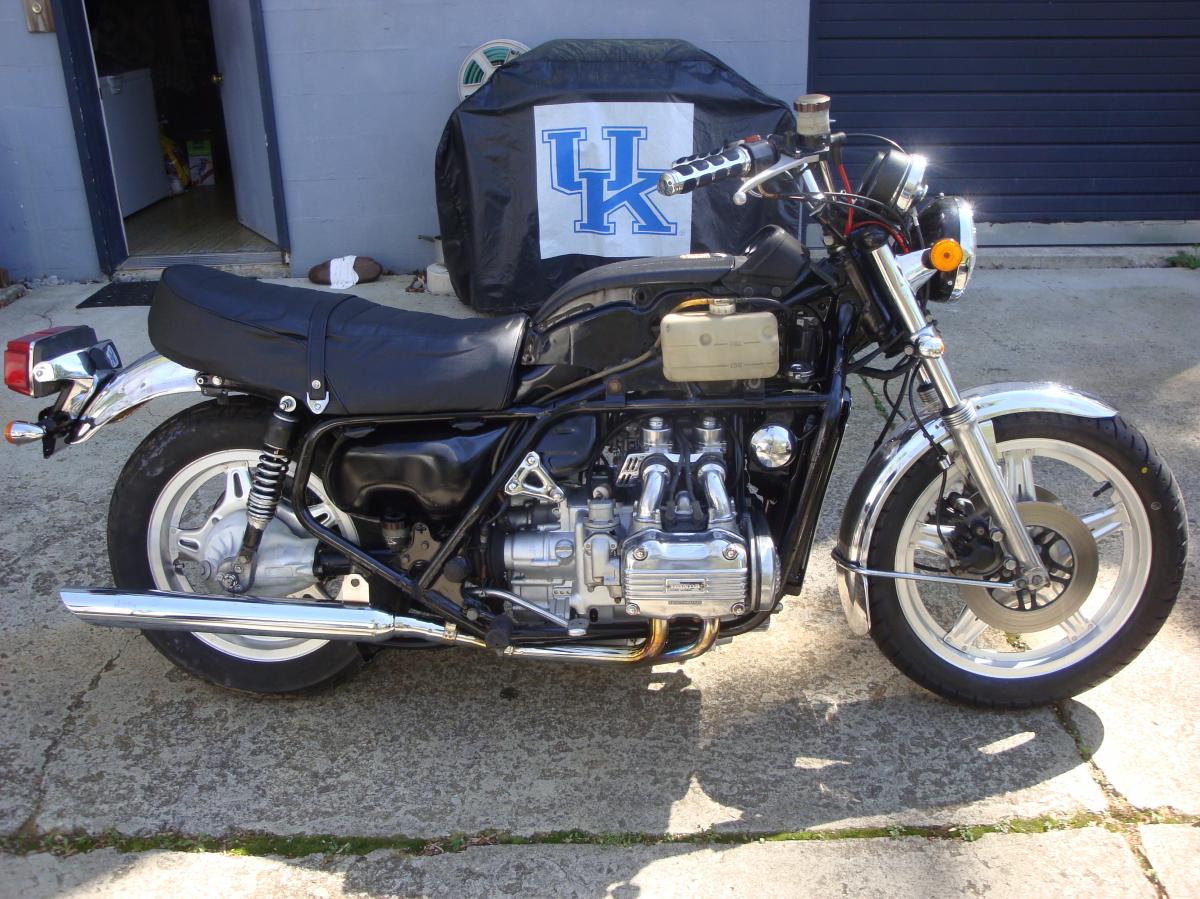