Did some brake bleeding. First the back - just flushed out all the old stuff, added new stuff. Think there's a very slight leak at the rear master cylinder that will have to be addressed, but it is firmer for now. I've noticed some guy in Canada is selling a complete stainless steel line kit for around $100 on eBay. I may buy those and rebuild the rear master cylinder at the same time.

I did the front brakes as well - banjo bolts and bleeders. That took some prep... 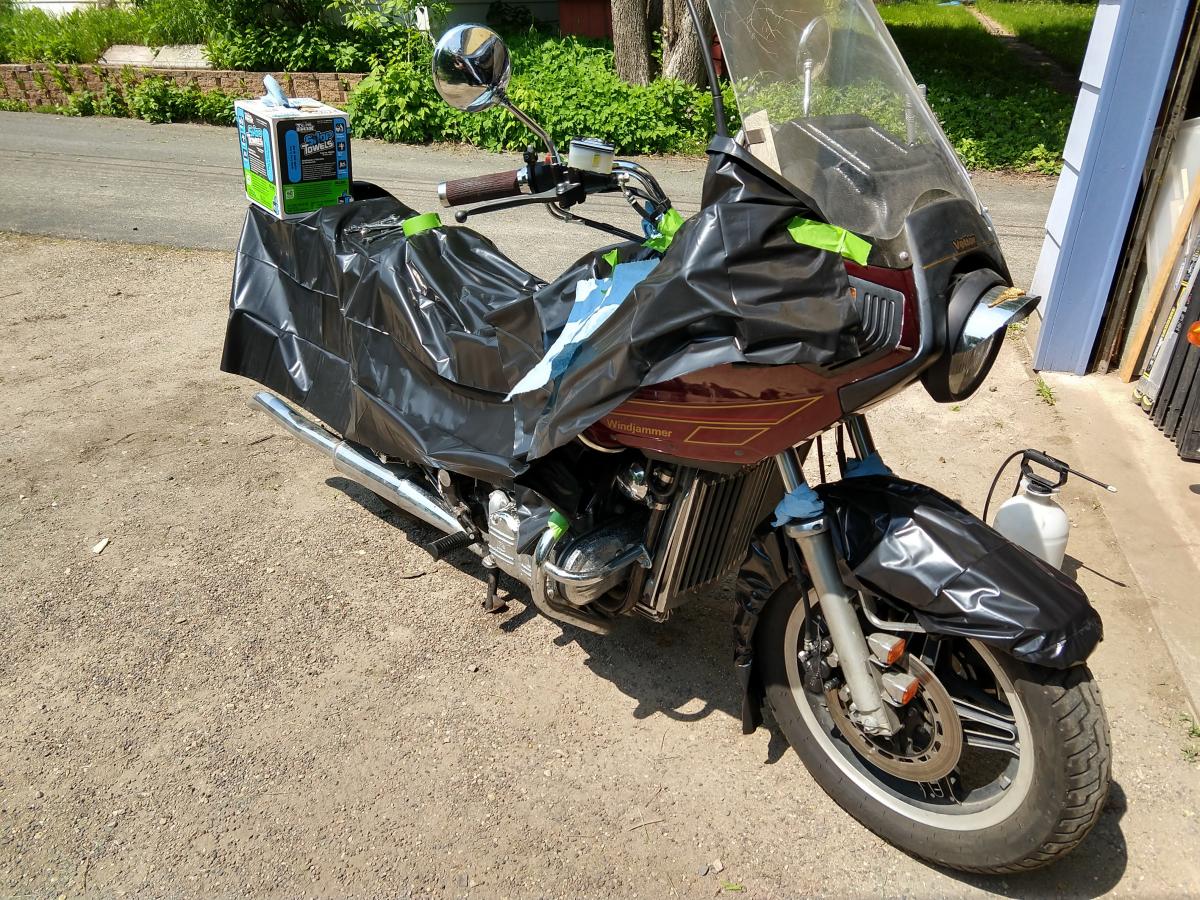 That was almost overkill, except one time when bleeding the banjo at the master cylinder, I sprayed brake fluid about two feet.

Washed the front forks as well, aired the suspension up to about 17 PSI, and went for a long test ride. Smoked from the left tailpipe for about 5 - 10 miles, but after that, it looked clean. However, after the test ride, the left fork was oily and the front suspension was down to around 3 PSI. Hmmm, time to read the service manual about front forks and do some repairs before the next ride. Otherwise, the test drive was good. Only thing I noticed was the clutch needed to be adjusted and the rear taillights were loose.

I did replace the final drive oil after the ride. I'll probably change it again in a few hundred miles and try to flush out more of the old fluid (It's easy enough and what else am I going to do with a bottle of 80W-90?).

I attempted to tackle the turn signals. There's something wrong there and it looks like a previous owner tried to fix it with caulk and a section of threaded rod. There's also the hacked together remains of trailer wiring. I can clean up the trailer wiring but I'm not sure about the mount. The mount is also welded together (poorly) for the license plate holder, which makes me just want to check a bone yard and find a new mount. I do need to do some more research here - both for trailer wiring and for what the stock mount was on the '82 Standard.

Right now, the bike's tail lights are disconnected and the license plate is off of it, but I'm not concerned, since I won't be riding it until I fix the front suspension.

Looked at the taillight/turn signal mounting plate. I think I know what they did. 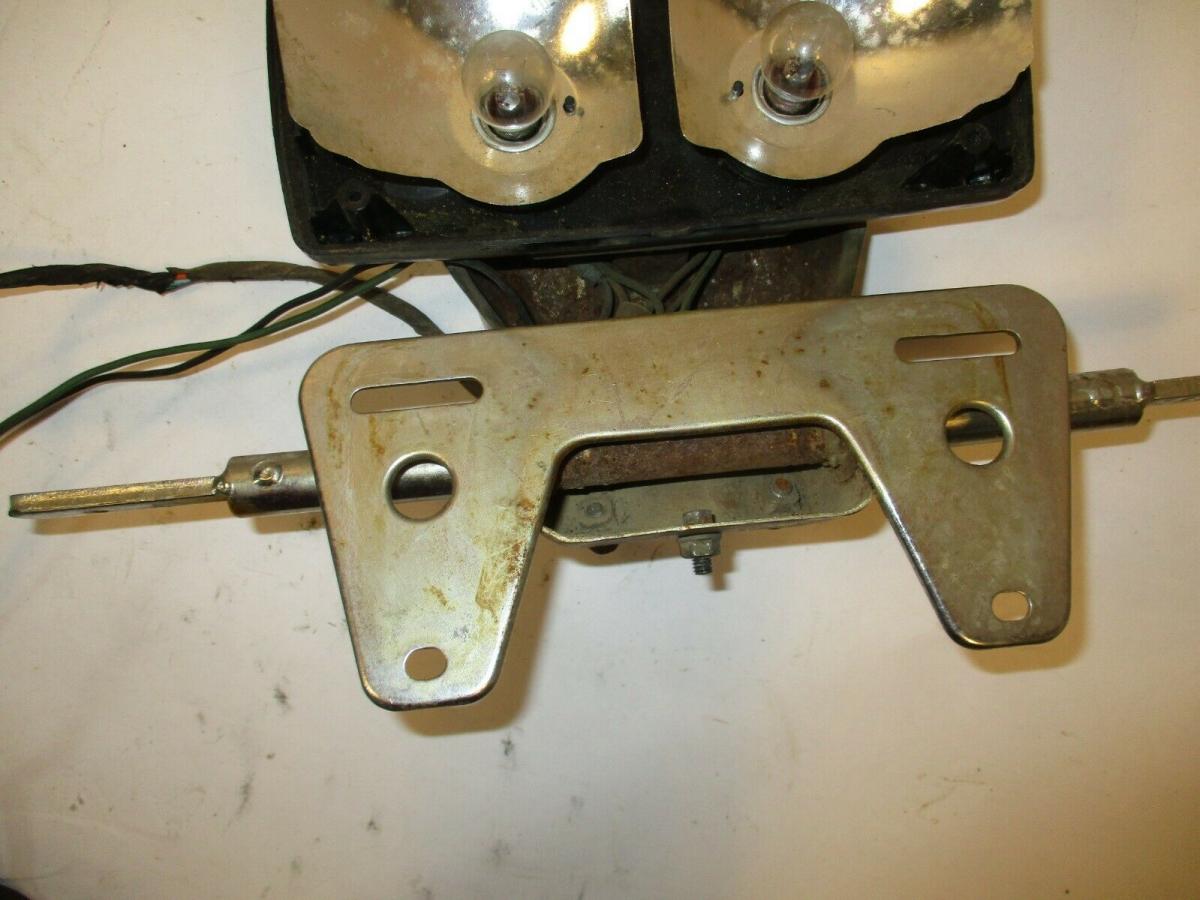 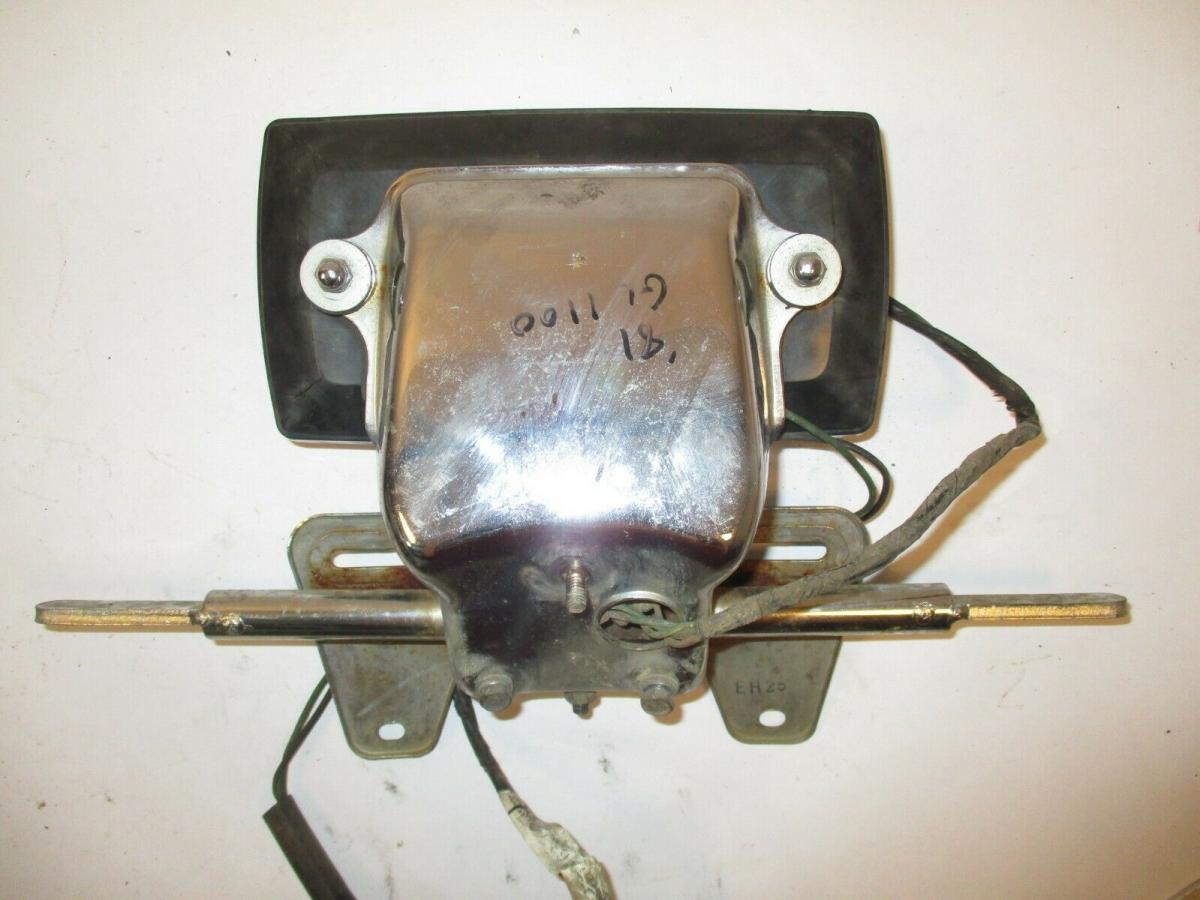 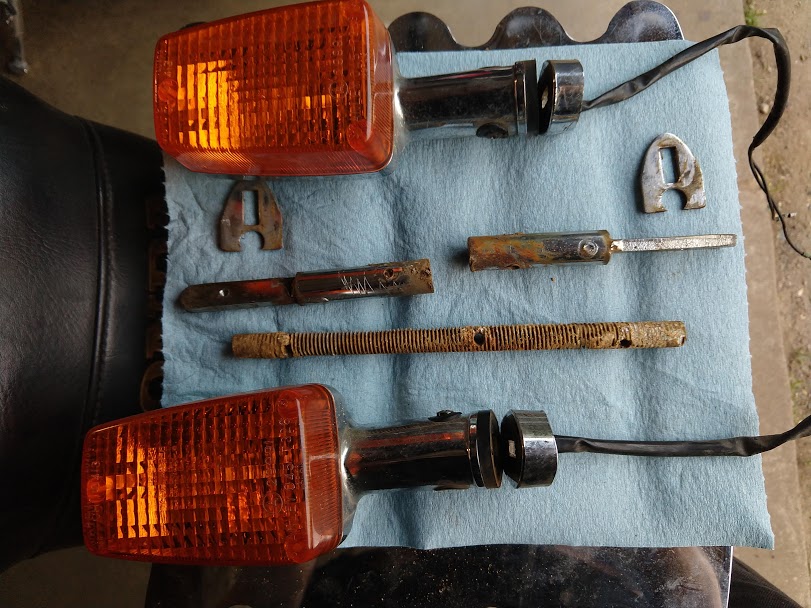 After thinking about it, I bet they wanted to remove the turn signals at one time (maybe while running rear luggage?), so they sawed off the mounts. Then later, they decided to add the turn signals back, so they put the rebar through it and attached the mounts to that.

Thinking of getting some Shinko 230s. They seem to get good reviews, and the price is reasonable.

Eeek! Started the forks today. Left fork lower bolt went fine. Right fork lower bolt is... bad. Very bad. Thing doesn't want to move at all. Debating how I want to handle this. Wants to strip easily. Tried an easy out, but I was putting so much force on the easy out that I was afraid I'd break it. Took the whole fork out, have it braced, and I still can't get it out.

Read a bit, and someone suggested a torx. Still have the hole from the easy out attempt, so I hammered in a decent size torx, got a great grip, and tried to extract. End result is that I hope a torx bit is easier to drill through than an easy out bit. On the plus side, it broke flush with the hole I drilled.

I can hammer in a 1/4" hex bit. Can't get it out though. I may try to borrow an impact wrench.

Assuming that fails, I'll try a large easy out in what was left of the hex key end.

If that fails, then carefully drilling off the bolt head.

If that fails, guess I'm looking for a new fork lower.

Always the impossible circumstance that has to be overcome

Too bad you didn't start with the impact. With the bolt ruined now, I'd go ahead and drill or grind off the head.

If you need to drill the head off see if you can find the correct size left hand drill bit. Sometimes when you are half way through drilling the gear off the damaged bolt can come out with the reverse drilling. :beg:

Impact did not work. Used a hand held impact tool, like the sort you use to take off the Phillips head of the screw that holds on the rotor on the car. Tried driving a bigger bit in it, just stripped it. Tried an easy out. Stripped it more. This bolt is solidly seized. I'm well past the point where I'd normally grab a torch and heat things up, but aluminum alloys don't like that at all. (Even if it doesn't melt, I know from bicycles that aluminum has problems being heated after a certain point). Going to have to grind off a bit of the broken torx down to where the compression washer is, then drill out the rest of the head of the bolt.

If that doesn't work, I'll need to get a new fork lower. And probably redo the brushings in both. Which is an additional expense I'd like to avoid.

On the plus side, even with all my hammering, don't appear to have damaged anything. 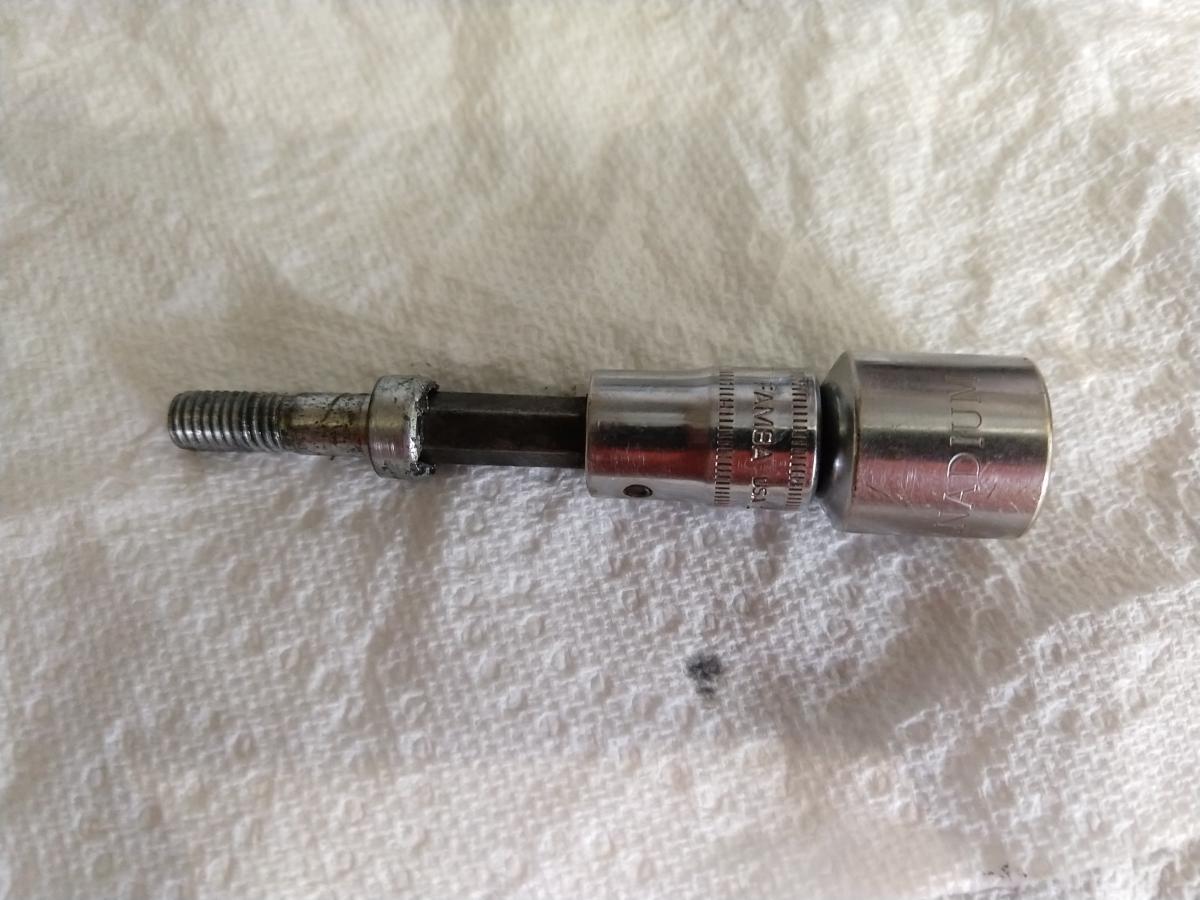 Glad you got that SOB.

It was quite a challenge. Had to walk away a few times before I was tempted to do something completely stupid. But I'm pleased it is over with. Think I'll see if a taxidermist will mount it. :BigGrin:

I managed to disassemble both forks completely tonight. I'll clean everything up, try to find some replacement crush washers, then measure the length of the springs and inspect the rest of the components. Already got the replacement kit for the seals. Maybe I'll upgrade to the progressive springs one day, but I'm curious about the stock handling.

I'm debating if I want to put some threadlock on the new bolts. And try to figure out what I want to use for fork oil. Could try ATF, or ??? Someone reports good results with 10W fork oil. Others report using 15W. ATF was supposed to be close to 10W, and there's also AW32 hydraulic oil, which is what a fork basically is. AW32 hydraulic oil has the advantage of being available in the store.

I used 20W50, and I found it was fine. Others posited that the ride might be a bit harsh, but I haven't found it so after a couple of years with it like this. Good luck, Dave

I bought some hydraulic oil - seems to be equivalent to 10wt, and should have anti-foaming properties.

Starting inspecting the parts. One of the backup rings was deformed (perhaps from removal?), so I need to order that. Bushings look good.

I'm missing the backup plate between the snap ring and the seal. On both sides, and I never removed the left fork slider, so I doubt I lost two of them. Doublechecked someone's 1982 GL1100 standard rebuild online, and their pictures shows them, so it isn't a service manual error. Guess I'll have to order that as well.

I'd wager that the backup rings being deformed was caused from not having the backup plate :grin:

Well this is an annoyingly late night. For some reason, the left caliper bracket is ridiculously close to the rotor - about 0.30 mm (where the Honda Service Manual says 0.70mm is the minimum). It ain't rubbing, which is good. It may always have been like this, but I'm annoyed about why it is the case. Checked the parts diagram, I'm not missing a spacer or a washer. I can't find any play in the mechanism.

Otherwise, fork rebuild is done. I think I'm going to put on the wheel and call it good for now. Not sure why this is the case. Can't be bending of the fork leg or anything, since the left fork was the one that came apart relatively easily. Maybe wear over time, or overtightening of the axle nut by a previous owner?